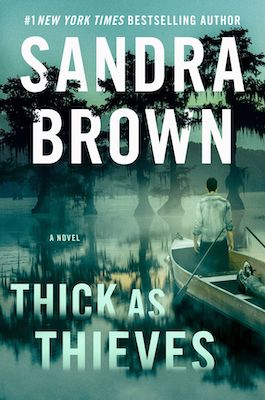 The following is an exclusive excerpt from Thick As Thieves, by Sandra Brown. The Queen of Romantic Suspense brings us yet another fabulous tale of action and chemistry. In this passage, a woman arrives at the home of a veteran turned detective and contractor, intent on convincing him to aid her in a quest for truth and justice.

The name “L. Burnet” was stenciled on the metal mailbox mounted on a post at the entrance to a gravel driveway. Although the road to get here had been bumpy, narrow, and roundabout, Arden had arrived at her destination.

Up to this point, the two months since the loss of the baby had been busy, but discouragingly unproductive. She hoped this call on L. Burnet would change that.

She turned into the driveway, pulled up behind a dually pickup truck, and let her motor idle as she assessed the house. The architecture was Acadian, which was unsurprising since the state line with Louisiana bisected Caddo Lake, and the lake was within shouting distance.

The white-frame, one-story structure had dark green shutters and a matching tin roof. It was scrupulously tidy and aesthetically pleasing. A porch with a low overhang ran its width. The only thing on the porch was a varnished wood rocking chair with a tall slat-back and wide armrests. Landscaping was limited to dwarf evergreen shrubs that bordered the edge of the porch on either side of a set of recycled redbrick steps.

She turned off her car. When she got out, her ears were assaulted by a high-pitched whine coming from behind the house. She walked around the tank-size truck and followed a footpath worn into the grass. It led her around the left side of the house to the backyard, which was studded with tall pine trees.

A sizable outbuilding matched the house’s white exterior and green tin roof. Its double garage door was raised. She made her way over to the opening and looked inside. The source of the racket was a buzz saw. The man operating it had his back to her. The noise was earsplitting.

He gave no sign of having heard her and remained bent over the worktable, ably cleaving a length of lumber down the middle.

She raised her voice. “Mr. Burnet?”

When he didn’t respond, she decided to wait until he’d finished. When he did, he straightened up, surveyed his work, then, much to Arden’s relief, switched off the saw.

As he came around, he pushed a pair of safety goggles up to his forehead. Upon seeing her, he reacted in a manner she couldn’t quite specify, and it had been so fleeting that if she had blinked, she would have missed it.

She said, “I hope I didn’t startle you. I called out, but you didn’t hear me above the racket.”

He held her gaze, gave her a slow once-over, then turned away to set the saw on the worktable. He pulled off the goggles and a pair of suede work gloves and placed them beside the saw before facing her again. “I heard you.”

She didn’t know what to say to that. If he’d heard her, why hadn’t he acknowledged her presence?

“My name is Arden Maxwell.” She walked toward him and stuck out her right hand.

He looked at it as though a handshake was a new experience for him, then reached for a faded red shop rag and used it to wipe sawdust off his forearms before shaking hands. He did so economically, almost curtly. “What can I do for you?”

He didn’t return her smile, only cocked his eyebrow.

And somehow that added an unintended innuendo to what she’d said. She was quick to explain. “I saw your ad. On the internet. I Googled local contractors, and you were listed.”

That was all he said, displaying no particular interest in whether or not he could secure her as a customer. She plunged on. “I called yesterday and left a voice mail, asking that you return my call. I guess you missed it.”

She looked beyond him at the newly halved board. “Yes, I see. Well, I had another errand to run in town, so I decided to try and catch you here, since it was on my way.”

She gave another light laugh. “A winding way. Granted, you are off the beaten path, and I almost missed the turnoff. But I found you.”

“Lucky I was here, or you would have come all this way for nothing.”

“I consider it a stroke of luck, yes.”

“I have a home project, a rather extensive one. It will require considerable time and a lot of hard work.”

Finished with the rag, he tossed it down onto the worktable. “How many contractors did you call before me?”

Abashed, she ducked her head. Then, realizing she owed him no explanation, she again met his gaze, which was cobalt blue and unwavering behind an unfriendly squint. He was younger than the image she’d formed in her mind, but she figured that the threads of gray in his dark hair, the squint lines, and the unsmiling mouth added years to his actual age.

His physique certainly wasn’t that of a man settling comfortably into his middle years. No paunch overlapped the waistband of his jeans. Well-defined biceps stretched the short sleeves of his black t-shirt. He was tall and lean and, overall, looked as tough as boot leather and as cuddly as a diamondback.

“Afghanistan. Iraq before that.”

“Oh, yeah. He saw action, all right. Might have spent a little too much time at war, if you know what I mean. But he’s all right. Not dangerous, or crazy, or anything.”

In the ad, a former client of Mr. Burnet’s had left his name as one to call for a reference. Arden had. In addition to his endorsement of Burnet’s craftsmanship and trustworthiness, he’d volunteered the information about his military service.

In truth, she hadn’t known what he’d meant by his comment on Burnet’s spending too much time at war. Now, she wished she had asked him to elaborate.

Maybe war had left L. Burnet taciturn and borderline rude. Or perhaps he was standoffish by nature. But, as long as he could do the work, she didn’t care whether or not he had an engaging personality. She wasn’t hiring someone to entertain her.

His stare was piercing, but she didn’t detect any madness behind it.

His stare was piercing, but she didn’t detect any madness behind it. Quite the contrary. She sensed intelligence, acute attentiveness, and a perceptiveness sharper than an average person’s. Little would escape him, and that was a bit discomfiting. However, she was willing to take her chances that he was of reasonably sound mind.

But—and this was the bottom line—what really recommended him was that over the course of the past two months, she had interviewed many contractors, and he was the last on her list of candidates for the job.

Thanks to the trust fund her late brother-in-law had established for her, she could afford to hire anyone. However, as a matter of principle, she wanted to finance this project using money she had earned, which put a ceiling on how much she could comfortably spend.

In answer to his question, she said, “Honestly, Mr. Burnet, I’ve consulted several others who were qualified.”

“They couldn’t fit your project into their schedules?”

“I couldn’t fit them into my budget.”

“Please don’t take offense. The comments posted online said that you do good work, that you’re dependable, and that you’re a one-man operation. At first, I didn’t see that as an advantage.”

“Yes. Because you don’t have a crew, I thought perhaps you would be a good choice.”

He propped his butt against the worktable and hooked his thumbs into the front pockets of his jeans. “You thought I’d work cheap.”

So much for diplomacy. His stance was challenging if not downright belligerent. The placement of his hands was a none too subtle assertion of masculinity. He seemed set on being blunt. To all of the above, Fine. “All right, yes, Mr. Burnet. I thought you might work cheap. Er.”

She gave a short laugh. “Before you determine that, couldn’t you at least hear me out?”

“An extensive project that would take considerable time? Lots of hard work? Sounds like what you have in mind is a complete overhaul of your house.”

“I don’t do complete overhauls.”

“Would you at least come and see—”

Her heart gave a bump of alarm. She had identified herself by name on the voice mail but had said nothing about the location of her house. The vehicle that came past her house each night sprang to mind. “You know where I live?”

He bobbed his square chin.

She studied him for a moment, then said slowly, “When you turned around and saw me here, you recognized me, didn’t you?”

“Somebody had pointed you out to me.”

“I think it was in the fried pie shop.”

“I didn’t even know there was a fried pie shop.”

“Oh. Well, then it must’ve been somewhere else.”

“Why was I being pointed out to you?”

He pulled his thumbs from his pockets and pushed away from the table, then glanced aside for several seconds before coming back to her. “You’re the lady who had the . . . emergency . . . in the grocery store.”

Her breath hitched, and instinctively she took a step back. “Oh.”

Six True Crime Books You Should Read This Month 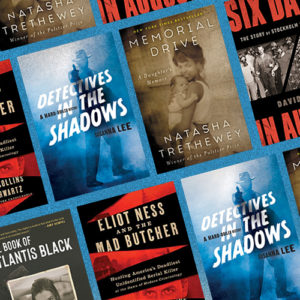 Six True Crime Books You Should Read This Month These are boom days for writers and readers looking for thoughtful, hard-hitting stories about real-life crime. Whether you’re...
© LitHub
Back to top