Crimereads Book Giveaway for This Storm 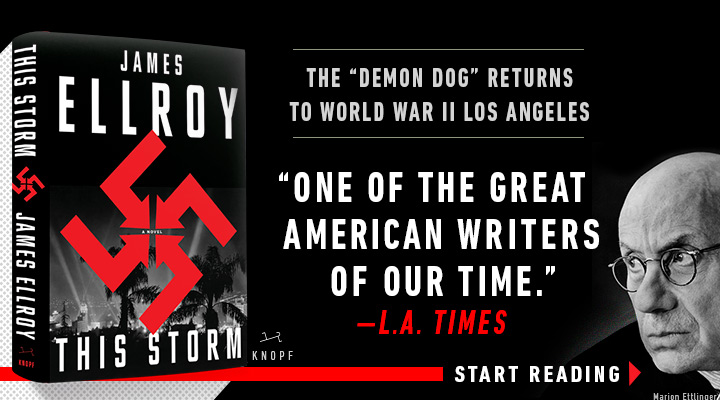 Win a copy of THIS STORM by James Ellroy

A massive novel of World War II Los Angeles. The crowning work of an American master.

It is January, 1942. Torrential rainstorms hit L.A. A body is unearthed in Griffith Park. The cops rate it a routine dead-man job. They’re grievously wrong. It’s a summons to misalliance and all the spoils of a brand-new war.

Elmer Jackson is a corrupt Vice cop. He’s a flesh peddler and a bagman for the L.A. Chief of Police. Hideo Ashida is a crime-lab whiz, caught up in the maelstrom of the Japanese internment. Dudley Smith is an LAPD hardnose working Army Intelligence. He’s gone rogue and gone all-the-way Fascist. Joan Conville was born rogue. She’s a defrocked Navy lieutenant and a war profiteer to her core.

They’ve signed on for the dead-man job. They’ve got a hot date with History. They will fight their inner wars within The War with unstoppable fury.

*Crimereads is collecting consent to send promotion emails on behalf of Knopf Doubleday Publishing Group, a division of Penguin Random House which is located at 1745 Broadway, New York, NY 10019. Knopf Doubleday Publishing Group sends informational and promotional emails on behalf of itself and Penguin Random House. Subscribers can unsubscribe at any time.