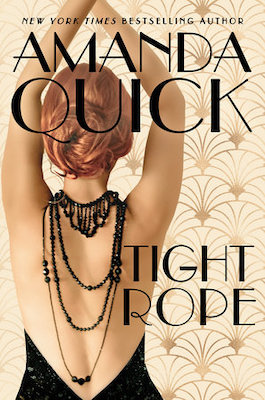 The following is an exclusive excerpt from Tightrope, a new historical thriller from Amanda Quick about Amalie Vaughn, a former trapeze artist who spends the whole of her inheritance money on a villa, hoping to transform it into a bed-and-breakfast, only to learn that it may be cursed.

The muffled scream jolted Amalie out of the falling dream. Hazel’s shriek ended in an abrupt manner that was more terrifying than the fearful cry. There was a heavy thud overhead.

Amalie found herself out of bed and on her feet before she fully comprehended what had awakened her. Heart pounding, she reached into the bedside drawer and took out the pistol that she kept there.

She crossed the room on bare feet and stopped at the door. One hand on the knob, she paused to listen. The villa felt unnaturally silent, as if it was holding its breath.

The nerve-icing sound sent another thrill of fear through her. She recognized that particular creak. The board that had groaned was just outside Hazel’s room.

A freezing fog of panic threatened to overwhelm her senses. She remembered her father’s words.

Fear gives you strength. You use that strength to fly.

She opened the door, trying not to make any noise, but she almost stopped breathing altogether when the old hinges squeaked. There was no way to know if the intruder on the floor above had heard the telltale sound.

She glided out into the hall. She no longer trained daily, so she was not as strong as she had been when she was performing, but she still possessed the sense of balance and the intuitive awareness of the space around her that had been her birthright as the offspring of a family of aerialists and high wire walkers. She had been trained to walk a tightrope stretched a few inches above the ground soon after she had learned to toddle. She had begun her career as a professional flyer when she was in her early teens. Tonight her bare feet made no sound on the carpet.

Earlier, on her way upstairs to bed, she had made certain that the wall sconce on each staircase landing was illuminated. It was a ritual that she went through faithfully every night, not just for the safety of the guests—with Pickwell dead, there were no guests in residence—but because six months earlier she had learned that monsters lurked in the darkness.

The light that marked the second-floor landing still glowed but the floor above was drenched in shadows. A whisper of night air wafted down, icing the back of her neck. Somewhere upstairs a door or a window was open.

She ascended slowly, gun in hand. She was careful to avoid the places on the treads she knew might creak or groan. The draft of cool night air got stronger as she went up the steps.

When she reached Hazel’s floor she stopped on the landing and listened.

She reached out and flipped the light switch. The sconce did not illuminate. Either the bulb had burned out or the intruder had unscrewed it.

The words echoed through the mansion.

The entrances to several guest rooms lined the corridor on both sides. There was enough moonlight at the far end of the hall to reveal that the French doors that opened onto a balcony were open.

There was no way to know if the intruder was still in the house. It would be foolish to go door-to-door in an effort to find out.

She had been trained to walk a tightrope stretched a few inches above the ground soon after she had learned to toddle. She had begun her career as a professional flyer when she was in her early teens.

She was torn between the need to find Hazel and common sense, which urged her to run downstairs and call the police.

Movement at the end of the hall startled her so badly she almost pulled the trigger in a reflexive action.

She whirled around in time to see a figure rushing toward the balcony doors.

Rage splashed through Amalie, acid-hot. It burned through fear and common sense alike. She had enough nightmares as it was—nightmares crafted by a real monster. Damned if she would let some two-bit burglar invade her new life and her dreams.

Gun clutched in both hands, she raced down the hallway toward the French doors. As she watched, the fleeing figure vaulted over the balcony railing and disappeared.

She slammed to a halt on the balcony and looked down, searching the moon-splashed gardens.

A shadowy figure bolted from the cover of an orange tree and ran through the gardens, heading toward the gate at the rear of the villa.

She pulled the trigger again and again. The shoots boomed in the night. But she knew that she was too far away and the target was moving too fast. If she actually did manage to hit the intruder, it would be by sheer luck.

The running figure, evidently unscathed, disappeared around the corner of the villa.

Not my lucky night, Amalie thought.

She realized she was still peering down into the darkness. In the heat of moment, she had been oblivious, but now that the fury was dissipating reality returned, and with it her new fear of heights. True, she was only on the third floor of the big house, but it was a long way down to the ground. A fall from that height could easily break a person’s neck. The Hollywood psychic had died jumping off the roof.

The darkness down below started to blur into a mesmerizing, dreamlike scene from one of her nightmares.

With a gasp, she turned away from the view. She paused briefly when her hand brushed across something on the railing. She did not need a flashlight to know that she had just found the knotted rope the intruder had used to descend into the garden.

She had to get to Hazel.

She ran back down the hall. In the shadows she saw Hazel’s crumpled form on the carpet. She reached inside the room and found the light switch. The glow spilled through the doorway, revealing the blood that matted Hazel’s gray hair.

She crouched and felt for a pulse with shaking fingers. Relief surged through her when she realized that Hazel was still alive.

Amalie hurried downstairs to call the police and an ambulance.

She waited until after Hazel was on her way to the hospital and the police had departed before she picked up the phone and dialed the number of the Burning Cove Hotel.

From TIGHTROPE. Used with the permission of the publisher, Berkley. Copyright © 2019 by Amanda Quick. 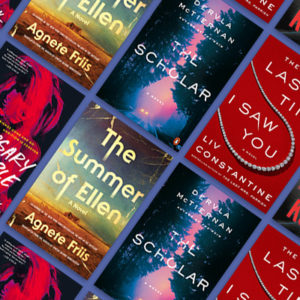 May's Best Psychological Thrillers Summer is really prime time for psychological thrillers, and May is the beginning of the high season. This month there are a couple...
© LitHub
Back to top