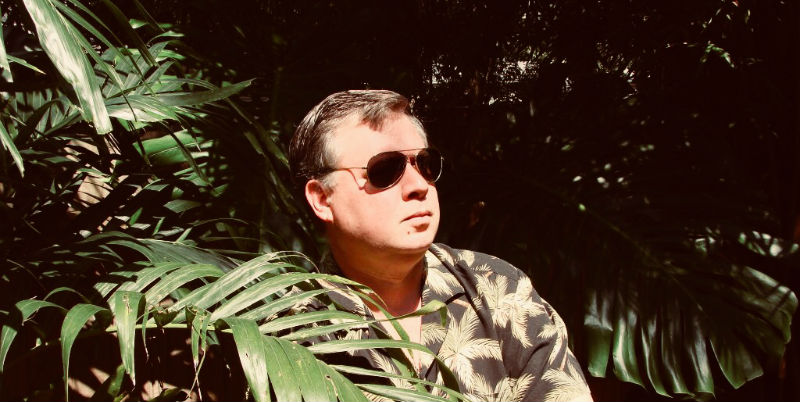 Writing a Madcap Mystery for the Land of Sunshine and Retirees

There’s a special moment towards the start of every new Tim Dorsey novel when you realize who the villain is going to be, and which cause Dorsey’s psychopathic anti-hero, Serge A. Storms, is going to take up this time. It’s fair to say there’s nothing quite like that sensation going in crime fiction today, which maybe explains why Dorsey inspires such fervent admiration and joy in his readers, who have formed a kind of cult following, twenty-two books into the series. Storms is himself a criminal, sure, but he always finds some unlikely cause, a little guy whom he goes about defending thanks to a few twists and turns of his own peculiar logic. The result is one of the zaniest, most entertaining mystery series around, a canon entirely fitting of the location, Dorsey’s home state of Florida. In the latest to the series, No Sunscreen for the Dead, Storms, along with his trusty burnout sidekick Coleman, decides he’s going to fight on behalf of Florida’s population of retirees, which he thinks is being unfairly targeted by scammers all over the country. Also, the Amish factor in. It’s the usual madcap crime action, a wild ride from start to finish, with many bizarre pockets of Florida overturned. We caught up with Dorsey to ask him a few questions about his latest work, his own feelings about retirees, and why Florida is such a constant source of treasure for crime writers.

CrimeReads: So, evidently there’s an Amish community in Florida, a pretty thriving one there in Sarasota. Naturally you put it in your new crime novel. So, how did you first come across Pinecraft and where, in your opinion, do its residents fit within the larger Florida landscape / culture? You seem rather fond of them.

Tim Dorsey: I used to live in Sarasota and see them all the time, and visit the restaurants, so it was a hometown thing for me. As for Florida culture, they’re outliers, which means they’re decent and don’t cause trouble. 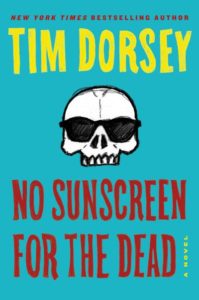 Florida and retirement seem to go hand-in-hand. No Sunscreen for the Dead explores the state’s reputation as “God’s Waiting Room” and looks at the many, many ways that the elderly population is susceptible to crime. Do you have a soft spot for the area’s seniors, like Serge does? Have they been a resource to you when it comes to collecting stories of old Florida?

Yes, I do have a soft spot. And coincidentally, while I was living in Sarasota, my grandparents were retired there and I visited a lot, which gave me an inside view into senior life down here. Also, other seniors whom I’ve met on the book tours have given me a lot of first-hand stories of historical significance.

Without giving too much away, sex among senior citizens plays a significant role in the new book. Is that a pet issue of yours or just a bit of serendipity?

I’m just reacting to my environment. There have been a number of news articles, and readers at my book signings have been talking about it quite a bit, so it would have been a conspicuous omission.

On a practical level, how do you keep tabs on all the strange and eccentric goings-on down in Florida? Do you keep a dossier of peculiar regional events?

There’s so much material in Florida that it’s mandatory to keep tabs with computer files. At they end of the year, I review them and cherry pick for the next book.

There’s a long tradition of humor in crime fiction, from Marlowe’s sardonic quips to icons like Donald E. Westlake, but nowadays it’s a relatively rarely practiced art. Were there any particular writers who influenced that strand of your fiction, whose work you took as a model for the tone and approach you were after? When it comes to striking the right balance, do you just follow your gut?

I follow my gut, which means I fly by the seat of my pants. But I have been inspired by a number of greats, such as Kurt Vonnegut and Carl Hiaasen.

Your (anti) hero Serge A. Storms has quite a fan base. What is it about his way of seeing the world (and especially Florida) that seems to resonate with so many readers?

I think people are frustrated with the growing incivility in society, and they vicariously get a kick from him handling jerks in a way they would like to but obviously can’t. 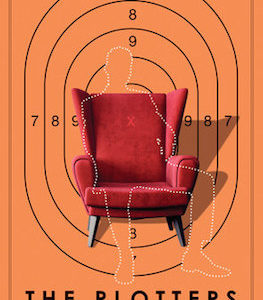 The bounty was posted, but still Chu hadn’t been caught. More rumors sprang up, swirling through the air like falling leaves...
© LitHub
Back to top