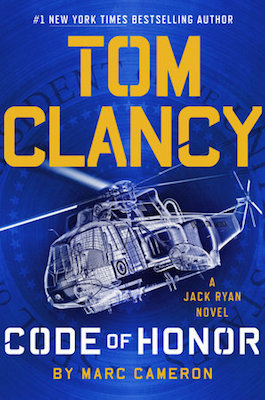 The following is an exclusive excerpt from Tom Clancy’s Code of Honor, by Marc Cameron. Jack Ryan, now U.S. president, is dismayed to find out that his friend, Father Pat West, has been arrested in Indonesia and accused of blasphemy against Islam. He's unable to mobilize to rescue Father Pat, so instead he has to figure out who is behind the accusation. And while he does, he receives a message from Father Pat warning of a terror attack.

Father Pat West stood on the hillside trail eating longan fruit and pondering sin. Large tea plantations covered most of the hills north of Bandung near Lembang, but this spot was relatively wild, carpeted with ferns and native vegetation, a likely place for a run with his local chapter of Hash House Harriers. The sun was still low and orange, not yet high enough to burn away the morning fog that still shrouded the green mountains. It was as good a time as any to reflect on his own lapses in judgment. He’d committed enough of them in his sixty-two years, a few doozies, in fact. If there was one thing he’d learned after entering the priesthood, it was that everyone had a few doozies when it came to sin. The government had even given him commendations for some of his—in a former life. For good or bad, he was an expert on sinning. He certainly recognized it when he saw it get out of a rented Toyota along the dirt road halfway down the hill. Head turning this way and that like a lost bantam rooster, the strange little newcomer was dressed in running shorts and a lime-green T-shirt. West chuckled sadly to himself. The shirt was a sin in and of itself.

The priest held one longan fruit—the size of a jumbo grape—between his thumb and forefinger as he watched the strange man approach. He squeezed firmly until the leathery skin broke and revealed the translucent fruit inside. Tossing the skin, he popped the syrupy white glob into his mouth and then spit the hard mahogany-colored seed into the bushes. It was an oddly soothing process, helping West think. It reminded him of watching his grandfather eat peanuts on the front porch of his home in Virginia.

The newcomer spoke for a moment to a man named Rashguard—one of the Kiwi Hashers who was down getting a plastic cooler out of his car. Rashguard pointed directly at West. The newcomer nodded, then looked uphill with a gaseous expression before beginning the steep trudge from the parking area.

Through the trees, on the winding road below, more car doors slammed. Odd, West thought, to have so many visitors on the same day.

Article continues after advertisement
“One of these days,” his teacher had said, “you’re going to regret this moment—lifting that ruck, that way.”

The priest was dressed for running—or, rather, fast walking. He’d run a great deal as a younger man, for enjoyment and as part of his rigorous training. He’d done a lot of things he regretted back then. One of his mentors, a man not much older than he was but with a lifetime’s more experience, had once watched him hoist a ninety-pound rucksack full of communications equipment and sling it nonchalantly over his back. “One of these days,” his teacher had said, “you’re going to regret this moment—lifting that ruck, that way.”

He remembered many exact moments, moments that left all manner of damage that he hadn’t realized when he was young and foolish and looking for adventure . . . Now, his creaky knees protested if he ran more than half a mile. Any farther than that and he found it difficult to stand and give the liturgy at Mass the following day.

Seven other Hashers from the Bandung chapter of the Hash House Harriers stood at the starting area a dozen yards uphill. This included the “hare,” who’d already laid out the trail. The hare would leave momentarily, but did not want to miss out on the socializing before the event started. All the runners in the group were men, a mix of Europeans, Aussies, and Kiwis. West was the only American.

Started in the thirties by a British Army officer in Malaysia, Hash House Harriers was often described as a drinking group with a running problem. The Bandung group still drank, but they were more discreet than Hashers in other areas, aware of the Muslim sensibilities in this country.

A few hours to run and joke with friends each week was Father West’s small break from the work of overseeing Catholic relief efforts from Bandung to Papua. Hash runs were his little sin of indulgence.

Having eaten all his longan fruit, West began his stretch while the newcomer hiked up the hill toward him. The air was oppressively humid and unmercifully hot, as it always was in this part of God’s vineyard. But the moist heat turned the mountain into a dense wall of green jungle in every direction. Banana, durian, and papaya grew wild on the hills. Locals often joked that a stray cigarette butt would produce a tobacco plant in a manner of days. It would probably not be long before longan trees began to sprout from the seeds he’d spit out. Countless varieties of flowers fed countless insects, and the insects fed countless birds. Lizards skittered through the foliage. Macaque monkeys hooted in the treetops. Between the buzzing, chirping, and howling, the place was as loud as it was lush.

In order to reach Father West, the newcomer had to take a long set of switchbacks, putting him within yards of a small group of shanties set back in the jungle along a fast-moving stream that tumbled down from the mountains. A dozen eyes watched from the shadows, waiting to see which way he would go.

The hares tried as best they could to lay the course through inhabited areas, but Indonesia was densely populated with many living in dire circumstances. It was inevitable that they crossed paths with beggars. Father Pat carried a few thousand rupiah for that purpose. When approached by a group, he’d direct them to Catholic services—careful to keep his words secular in this fiercely Muslim country—but he didn’t have the heart to say no to an individual.

Runs were open to everyone. Newcomers gave the group someone else to poke fun at. Hangdog and angry-looking at the same time, with the countenance of a piece of coal, this one was a likely candidate.

“Thank God.” The man bent over, hands on his knees, panting from the short walk.

“Thank God, indeed.” West hoped his outward smile hid his inward groan. “Welcome on behalf of the Bandung Hash House Harriers. Budgy has the guestbook up next to the flags. You will need to sign in.”

The man stuck out a hand, still bracing against a knee with the other. He swallowed hard from climbing the short distance in the heat. The trail only got worse from here. Even walking was obviously going to prove a challenge for this one.

“No shit?” Noonan said, still catching his breath. “You’re the priest from the pic on the website?”

“You look different,” Noonan said. “But I’m glad I found you. You’re the reason I’m here.”

West helped him sign in and introduced him to the rest of the group.

“I’m not Catholic,” Noonan continued, after introductions and Hash business was finished and the run began. He kept checking over his shoulder, addled about something. Burdened. The people who came to Father West were often that way. “I’m not anything, really,” he went on. “I mean, my wife drags me to church, but they don’t do formal confessions there. Still, I got some stuff I really need to get off my chest. It . . . I don’t know . . . It needs a pro. An American pro. You guys are good at confessions. Everybody knows it.”

West heaved a heavy sigh, repenting of his earlier impatience. As odd as this young man was, he’d come for help.

“I found you online,” Noonan continued. “I called this morning. The guy said I’d find you here. Can you do it? Take a confession, I mean.”

“Why don’t we just speak as friends?” West said. “If talking about things that bother you gives you comfort, then that is good enough for the time being. I am happy to listen.”

Noonan gave an emphatic nod. “Yeah,” he said, breathless with worry. “Yeah, I guess that would work.”

He spilled his guts for the next ten minutes, admitting that he’d been weak and slept with a Sundanese woman he’d met in a bar. For some reason, he made a point of saying that the woman wasn’t “all that good-looking,” as if cheating on your wife with a homely girl made it less of a sin. Noonan began to go into explicit detail about what he’d done with the woman. For a moment, West thought he might be one of those people who got some gratification from bragging about their behavior. Then Noonan began to weep in earnest, tears accompanied by the appropriate amount of flowing snot. Perhaps the sorrow was just over being caught, but it was sorrow nonetheless.

“I know I did wrong,” Noonan said, scuffing his feet in the loamy ground as he walked.

Here it comes, West thought. The mitigation. I did wrong, but I’m not to blame, and this is why.

“The thing is,” Noonan continued. “It was all a setup.”

The way he said it made the hair on the back of West’s neck stand on end. “A setup?”

Noonan nodded emphatically. “Yeah. Some guys who said they were Indonesian policemen busted in from the bathroom and caught us in the act. They threatened to tell my wife—”

West stopped on the trail. “They entered from the bathroom?”

“Does the bathroom have exterior doors?”

“Do you think they were waiting in there the entire time?”

“Did these men want money?”

“That’s the thing,” Noonan said. “Not at all. I offered to pay them, but they wanted something else.”

West felt himself putting on an old hat that he’d been all too happy to take off. He looked from side to side, instinctively checking over his shoulder. The other hashers had pulled well ahead, so he was alone now with the newcomer. Somehow he knew that with one more question he’d slip inexorably into his previous life.

“What did these men want?”

“Something from my work.”

The way Noonan glossed over it piqued West’s curiosity. He tipped his head toward the gaudy T-shirt. “I assume you’re in some kind of tech field. Computers?”

“Software,” Noonan said. “I work for Parnassus, a computer game company in Boston.”

West picked up his pace. It was difficult to think about two things at once, and if Noonan had to focus on where to put his feet, he might be more forthcoming.

“That must be an interesting job.”

Imagine that, West thought, but he said nothing.

“Anyway,” Noonan continued. “The engineer I work with set up this deal that made us a shitload of money, but . . .” He paused, peering at West through the dim light filtering down through the jungle canopy. “I really only wanted to tell you about how I messed around on my wife.”

“As you wish,” West said. “I only ask because it seems like something else is troubling you. I can see it in your eyes.”

“I can,” West said honestly.

Noonan walked in silence for two full minutes before glancing sideways at the priest. “It’s just . . . I think I got in way over my head on this. My partner, another software engineer at Parnassus, we developed this software that’s like nothing I’ve ever seen. It’s going to revolutionize the industry.” 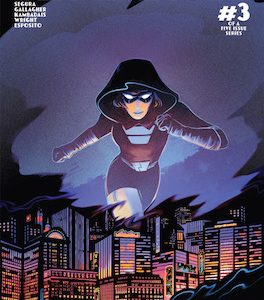 Black Ghost A note from the writers... "Drinking and casual heroism don't mix ... right? Unless you're Lara Dominguez, and you're...
© LitHub
Back to top