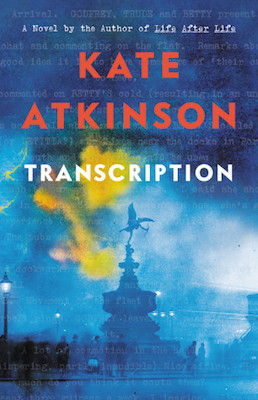 The following is an exclusive excerpt from Transcription, a new novel of espionage from Kate Atkinson. We couldn’t be happier to see her return to mystery form after years in the literary fiction world, and in the following passage, as in the rest of the book, Atkinson shows herself to be the true heir of le Carre.

She ordered another awful coffee and, for fear of encouraging him in some way, tried not to look in the direction of the funny little man who was sitting at a corner table. He had been staring at her on and off since she first sat down, in a way that was extremely disconcerting. Like many in Moretti’s, he had the shabby air of the post-war European diaspora. There was a trollish look to him too, as if he had been put together from leftovers. He could have been sent from Booking to play one of the dispossessed. A hunched shoulder, eyes like pebbles—slightly uneven, as if one had slipped a little—and pockmarked skin that looked as if it had been peppered with shot. (Perhaps it had been.) The wounds of war, Juliet thought, rather pleased with the way the words sounded in her head. It could be the title of a novel. Perhaps she should write one.But wasn’t artistic endeavor the final refuge of the uncommitted? Juliet was contemplating confronting the odd little man in the polite way of an English woman—Excuse me, do I know you?—although she was fairly certain that she would have remembered someone so odd, but before she could get as far as addressing him, he stood up abruptly. She felt sure he was going to come over and speak to her and readied herself for some kind of conflict, but instead he shambled towards the door—he had a limp, she noticed, and in lieu of a walking-stick he was supporting himself with a large furled umbrella. He disappeared into the street. He hadn’t paid, but the Armenian behind the counter merely glanced up at him as he left and remained uncharacteristically unperturbed.

Like many in Moretti’s, he had the shabby air of the post-war European diaspora. There was a trollish look to him too, as if he had been put together from leftovers.

When her coffee arrived, Juliet swallowed it down like medicine, hoping it would perk her up for the afternoon’s onslaught, and then gazed like a clairvoyant at the coffee grounds that were left at the bottom of the small cup. Why would Godfrey Toby refuse to acknowledge her?

He had been coming out of a bank. That used to be his cover—bank clerk. It was clever really, no one wanted to engage a bank clerk in conversation about his job. Juliet used to think that someone who seemed as ordinary as Godfrey Toby must be harboring a secret—a thrilling past, a dreadful tragedy—but as time had gone by she’d realized that being ordinary was his secret. It was the best disguise of all really, wasn’t it?

Juliet never thought of him as “John Hazeldine” for he had inhabited the rather dull-seeming domain of Godfrey Toby so thoroughly, so magnificently. To his face he had been “Mr. Toby,” but really “Godfrey” was how everyone used to refer to him. It indicated neither familiarity nor intimacy, it was simply a habit that had formed. They had called their operation “the Godfrey case” and there were a number of files in the Registry that had been headed simply “Godfrey,” and not all of them were successfully cross-referenced.

That was the kind of thing that used to send the Registry queens into a tizzy, of course. There had been talk of moving him abroad after the war ended. New Zealand. Somewhere like that anyway. South Africa, perhaps.

To protect him, in case of reprisals. But wasn’t retribution—one way or another—something they were all at risk of? And his informants, the fifth columnists—what of them? There had been a plan to monitor them in peacetime, but Juliet wasn’t sure if it had ever been implemented. She did know that the decision had been made to leave them in ignorance after the war. No one had told them about MI5’s duplicity. They never knew that they had been recorded by microphones embedded in the plaster of the walls of the flat in Dolphin Square to which they came so eagerly every week. Nor did they have any idea that Godfrey Toby worked for MI5 and was not the Gestapo agent to whom they thought they were bringing traitorous information. And they would have been very surprised to know that the following day a girl sat at a big Imperial typewriter in the flat next door and transcribed those traitorous conversations, one top copy and two carbons at a time. And that girl, for her sins, had been Juliet. When the operation was wound up at the end of ’44 they were told that Godfrey had been stood down and “evacuated” to Portugal, although in reality he had been sent to Paris to interview captured German officers.

Where had he been since the end of the war? Why had he returned? And, most puzzling of all, why would he pretend not to recognize her?

Where had he been since the end of the war? Why had he returned? And, most puzzling of all, why would he pretend not to recognize her?

I know him, Juliet thought. They had worked together throughout the war. She had been in his home, for heaven’s sake—in Finchley—where he had lived in a house with a solid oak front door and a robust brass door-knocker in the shape of a lion’s head.

A house with leaded lights and parquet flooring. She had sat on the cut moquette of his solid sofa. (Can I get you a cup of tea, Miss Armstrong? Would that help? We’ve had rather a shock.) She had washed her hands with the freesia- scented soap in his bathroom, seen the array of coats and shoes in his hall cupboard. Why, she had even glimpsed the pink satin eiderdown beneath which he and Mrs. Toby (if there ever really had been such a person) slept.

And together they had committed a hideous act, the kind of thing that binds you to someone forever, whether you like it or not. Was that why he had denied her now? (Two sugars, that’s right, isn’t it, Miss Armstrong?) Or was that why he had come back? I should have followed him, she thought. But he would have lost her. He had been rather good at evasion.

From TRANSCRIPTION. Used with the permission of the publisher, LITTLE BROWN AND CO. Copyright © 2018 by Kate Atkinson.

The Crime Fiction of Marseille 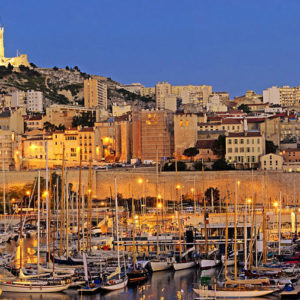 The Crime Fiction of Marseille Marseille has always had a reputation as a distinctly raffish port city. Long a multilingual melting pot of sailors served...
© LitHub
Back to top