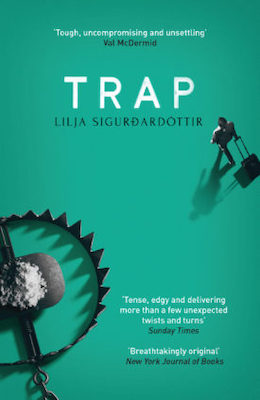 The following is an exclusive excerpt from Trap, the second in Lilja Siguroardottir’s Reykjavik Noir trilogy. Sonja is living in Florida after narrowly escaping the Icelandic drug lords, safe until her son is taken and she gets caught up in their bidding, suddenly a pawn in a trap that endangers the very lives she set out to protect.

Sonja was wrenched, shivering, from a deep sleep. She sat up in bed and looked at the thermometer on the air-conditioning unit; it was thirty degrees in the trailer. She had closed her eyes for an afternoon nap and fallen fast asleep while Tómas had gone to play with Duncan—a boy of a similar age who was staying in the next trailer. While she’d been snoozing, the sun had raised the temperature in their little space to thirty degrees, at which point the air-con had rumbled into action, blasting out ice-cold air.

Her dreams had been of pack ice drifting up to the shore alongside the trailer park, and however ridiculous the idea of sea ice off the coast of Florida might be, the dream had been so vivid that it took Sonja a few moments to shake off the image of grinding icebergs approaching the beach. While she knew the dream had been a fantasy and that the chill of the ice had in fact been the air conditioning, it still left her uneasy. A dream of sea ice wasn’t something that could bode well.

Sonja got off the bed, and as soon as she stepped on the floor, she stubbed a big toe on the loose board. This trailer was really starting to get on her nerves. But it didn’t matter, because it was really time to move on. They had been here for three weeks, and that was already a dangerously long time. Tomorrow she would discreetly pack everything up and in the evening, without saying goodbye to any of the neighbours, and under cover of darkness, they would drive away in the old rattletrap she had paid for in cash. She had coughed up a month’s rent in advance, so the trailer’s owner wouldn’t lose out.

This time, she and Tómas would travel northwards to Georgia and find a place there to rent for a week or two; and then they’d move on again—to some other location, where they would stay, but then depart before they’d put down any roots. They would leave before they could be noticed, before Adam could track them down. Adam who was Tómas’s father; Adam who was her former husband; Adam the drug dealer. Adam the slave driver.

One day, once they had travelled far enough and hidden their tracks well enough for Sonja finally to feel secure, they would settle down. It would be in a quiet spot, maybe in the US, or maybe somewhere else. In fact, it didn’t particularly matter where the place was, as long as it was somewhere they could disappear into the crowd, where she wouldn’t constantly have to glance over her shoulder.

Sonja peered into the microwave—something that had become a habit. Inside, giving her a sense of security by being where it should be, was the sandwich box full of cash. It was a white box with a blue lid, and was stuffed with the dollars and euros she had scraped together during the year that she had been caught in Adam’s trap. This bundle of cash was her lifeline, in this new existence where she dared trust nobody. She had got herself a prepaid Walmart MoneyCard and had loaded it with enough to keep them afloat for a few months, but she had not dared apply for a normal credit card; she didn’t want to risk Agla, with her access to the banking system, using it to track her movements.

Sonja peered into the microwave—something that had become a habit. Inside, giving her a sense of security by being where it should be, was the sandwich box full of cash.

Her heart lurched at the thought of Agla. The memory of the scent of her hair and the warmth of her skin under the bedclothes brought a lump to Sonja’s throat that refused to be swallowed. The more time that passed since their parting, the harder she had to work to stop herself from calling her. Iceland was behind her, and that was the way it was. This was her and Tómas’s new life, and she was fully aware that to begin with it would be a lonely one. But loneliness wasn’t her biggest problem; a much weightier concern was their safety—Tómas’s in particular. If she allowed herself the luxury of contacting Agla, there was every chance that Adam would sniff out their communication and use it to track her down.

Sonja opened the trailer door and sat down on the step. The air outside was hotter than inside the trailer and the afternoon sun cast long shadows from the trees across the bare earth at the centre of the cluster of trailers. Sonja took a deep breath of the outdoor air and tried to throw off the discomfort the dream had left her with. The old, toothless guy opposite stood over his barbecue, which sent up plumes of smoke as the fire took; Duncan’s mother sat in a camp chair outside the trailer next door, listening to the radio. There was a peace to the place, but it would soon come to an end, broken by the noise of traffic and horns on the freeway as people began the commute home from work.

Duncan came out of his trailer at a run, along with the basketball that he dribbled everywhere. He half crouched over the ball, and Sonja smiled to herself. She and Tómas had seen that his weird dribbling technique didn’t affect his accuracy when he shot for the basket. His skill at basketball was unbelievable, and after a few days playing together, his interest had infected Tómas as well.

‘Duncan! Where’s Tómas?’ she called, and the boy twisted in the air, dropped the ball through the basket fixed to the trunk of a palm tree and, when his feet were back on the ground, shrugged.

‘Where is Tómas?’ she repeated.

‘I don’t know,’ Duncan said, still dribbling the ball. ‘He went down to the beach just now, but then some guys came looking for him.’

‘Guys? What guys?’ In one bound Sonja was at Duncan’s side.

He finally let the ball drop from his hands. ‘Just guys,’ Duncan said. ‘Just some guys.’

‘Tell me, Duncan. Where did they go?’

Duncan pointed towards the woods that lay between the trailer park and the beach.

‘What’s up?’ Duncan’s mother called from her camp chair, but Sonja didn’t give herself time to reply.

She sprinted towards the beach, her mind racing. The vision of ice on the shore, the groaning of the floes as the waves grounded them on the beach and the chill that the white layer brought with it clouded her thoughts as if the dream were becoming a reality. She cursed herself for not having bought the gun she had seen in the flea market at the weekend.

It’s never good for an Icelander to dream of sea ice, she thought. That means a hard spring to come, and ice brings bears.

From TRAP. Used with the permission of the publisher, Orenda Books. Copyright © 2018 by Lilja Siguroardittir. Translation copyright 2019 © by Quentin Bates. 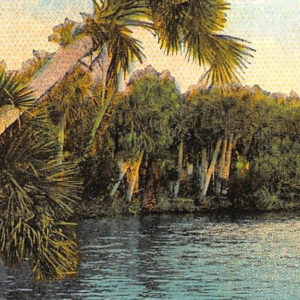 John D. MacDonald's Mission to Save Florida Last fall, as part of the annual Bouchercon celebration of mysteries and their authors, one panel was devoted to discussing...
© LitHub
Back to top