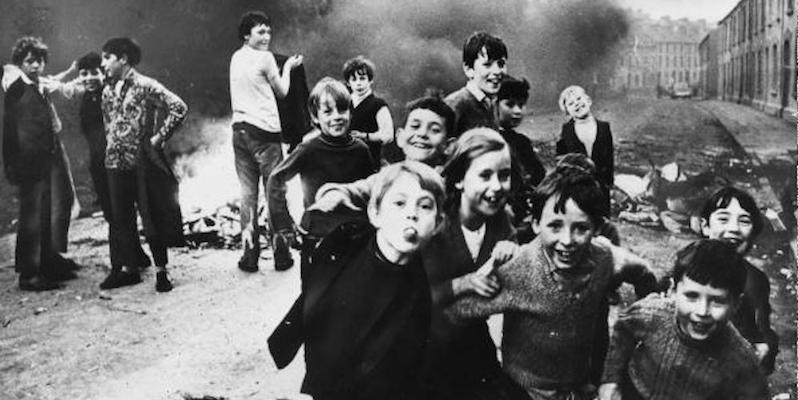 Growing Up in the Midst of a Low-Level Civil War

I thought I had emerged from my Northern Irish childhood unscathed. It took me years to realize that wasn’t true.

Through the seventies, the eighties, and most of the nineties, my native Northern Ireland suffered a low-level civil war known as The Troubles. I was born in the early years, and I moved to college across the sea in England before a ceasefire was finally called, so it pretty much defined my upbringing, and it still defines that place to the outside world, and often to itself.

And yet, none of it happened to me. It was something I heard about on the news like everybody else. My life was as ordinary as a person’s could be.

Once or twice a week the local bulletins would lead with the death of a solider or a police officer at the hands of the paramilitary IRA, an illegal armed group dedicated to ending Britain’s rule over the small portion of Ireland it retained when the rest of the island was given independence, decades before. Less often, the Loyalist paramilitaries, formed to resist the IRA, would make the headlines. And a couple of times a year a major bomb would hit, claimed by one side or the other, often killing several civilians.

But all this was miles away from me. The news cameras never seemed to come to our little town.

When you went for a drive more than a mile or two, chances are you would be stopped at a temporary vehicle checkpoint, where heavily armed soldiers would verify your ID and ask where you were going. If you were unlucky, they could keep you standing at the side of the road for hours, humiliated and angry. Houses and business premises were torn apart by soldiers looking for weapons, cars were stolen by the IRA for use in attacks, and those suspected of giving information to the authorities were subject to so-called ‘punishment beatings’, or given notice to leave the country.

At least, those were the stories I heard. But it never happened to anyone I knew.

They used to say every family had been touched by the conflict. Everyone had lost a relative or friend, everyone had been caught up in the aftermath of a shooting or a bombing, everyone had seen something awful, experienced the terror that terrorism is supposed to create.

Everyone, it seemed, except me.

When I went away to college, my English friends would ask me all about my upbringing. I was exotic. I was exciting. I had grown up in a conflict zone, and for politically-minded students, this had real cachet.

But I had nothing to tell them. My best stories were about winning a schools’ debate competition, about borrowing my dad’s cine camera to remake Indiana Jones movies, about the crazy show we put together at the local docks with my youth theatre group. Everyone had stories like these. And so, at last, I became one of everyone.

I couldn’t have been happier. I had shrugged it all off. I had made it out unscathed.

It took me years to realize that wasn’t true.

There were clues along the way. When I was at college, President Bill Clinton came to visit, and the week before, local police and U.S. Secret Service agents descended on the campus to check security and dry-run his arrival. The first any of us knew was a huge helicopter landing right behind the library where we were working. No one could hear a thing above the thunderous shudders of the blades. When it passed, one of my fellow students, unfamiliar with the racket, asked what on earth that was.

My whole childhood, those things took off and landed three or four times a day at the helicopter base at the top of our street, crossing right over the house. And when they did, there was no point trying to talk. You just had to pause the conversation and look at your shoes until the windows stopped rattling, then pick up and carry on as if nothing had happened. After a while, you just stopped hearing them at all.

Later, I’d tell my wife, a native of suburban London, some of the detail of a life I now knew wasn’t so ordinary. She used to urge me to find a way to write about it. She was hungry to know, to see that world through my eyes, and she knew these were great stories. I did too.

So eventually, reluctantly, I did write about it.

After my first novel The Countenance Divine, a crazy historical fantasy about the end of the world, I determined to focus on something more personal. I worked for a year on a polite literary novel about someone like me coming to terms with the world he had grown up in. It was beautifully detailed about my own emotional experience, it was full of quirky local color, and it had a few shady local characters I invented, to fill in the blanks of the darker side.

But I didn’t believe a word of it.

There was plenty of authenticity, but none of the truth. I knew I had to start over. The elephant in the room, I realized, was the conflict itself…

There was plenty of authenticity, but none of the truth. I knew I had to start over. The elephant in the room, I realized, was the conflict itself, and those who were directly involved. Their everyday existence was as dull as mine to the outside eye, but they lived a secret double life full of guns, money and intrigue, the stuff of hard-boiled thrillers and gangster movies. That was how they saw themselves: as honorable heroes, or swaggering gunslingers. That was where the action was. I needed to forget about me and find a way to write about them.

I had already decided to borrow an ancient myth for my new structure: the ancient Greek epic the Iliad, a gripping and violent tale of revenge and betrayal which dramatized an internal feud among fighting men in the final days of a long-running conflict. Everything I could want to say on the subject of men at war had already been said a few thousand years ago, so I thought I might as well be honest about that. Above all, Homer’s tale had plenty of the two key ingredients of any great story: sex and death. The question was how to tell it.

The answer I found was the snappy vernacular, short chapters, and stripped-back narrative momentum of crime fiction. I would reimagine those characters in the grimy, sordid world of a terrorist cell plotting to attack the local military base, whose plans fall apart when two key players fall out over a woman. I would write in the language those people spoke, the kind of story they themselves would enjoy. I had to learn how to write a thriller.

The best literary fiction can tell us what it’s like to be alive, help us see the world through someone else’s eyes, with careful attention to the texture of everyday experience. Genre fiction does something more, and equally valuable: it lets us play out our dreams, and our nightmares. And it does it in the way that great stories have always worked, from the Iliad onwards: by compression and imagination. Rather than original insight or detailed examination of behavior, it revels in archetypal character, heightened narrative suspense, abundance and exuberance of incident, and a warm embrace of the melodramatic, the speculative and the supernatural.

That’s why we love it. In romance, erotica, fantasy, often in SF and historical fiction too, we look for the life we wish we could have. And horror, thriller, and crime let us live out our deepest fears. We run the thought experiment of the worst-case scenario, find out whether we can give our enemies the slip, outwit evil when it tries to deceive us. We need those stories to make sense of the darkness, to find some order in the chaos we fear is bubbling away just beneath the surface of civilization, just in case our turn comes someday. You never know.

Country, the novel I eventually wrote, has nothing much to do with the life I knew growing up, but it has everything to do with the stories I have always loved, and still do. It’s not giving you the facts; instead, it’s going for your guts, taking you on a pedal-to-the-floor ride through the worst fears and wildest fantasies of the best and the worst of the people who lived in that time and place. It makes you see the world through their eyes, whether you like it or not.

None of it is real, but take it from me: all of it is true. 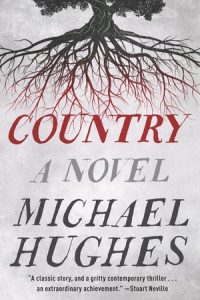 Michael Hughes grew up in a small town in Northern Ireland. A graduate of Oxford, he also trained in theatre at the Jacques Lecoq School in Paris. He has worked for many years as an actor under the professional name Michael Colgan, and he also teaches creative writing. He lives in London with his wife, the acclaimed historian Tiffany Watt Smith, and their two children. His first novel, The Countenance Divine, was published by John Murray/Hachette UK in 2016. His latest novel, Country, is now available from Custom House Publishing.

25 (More) Crime Books You Can Finish in an Afternoon 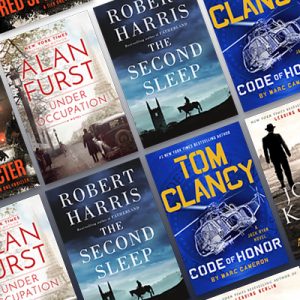 I’m just going to be honest here—this was kind of a crazy column to write. November, like so many months before it, is stacked...
© LitHub
Back to top