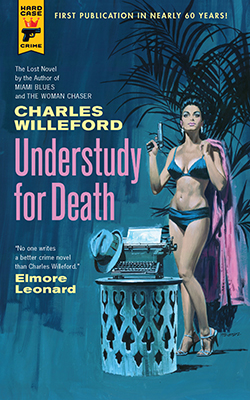 The following is an exclusive excerpt from Understudy for Death, a newly reissued crime classic from Charles Willeford, in which a detective looks into a woman’s supposed suicide, which he suspects is murder.

“Sure. Either bourbon or scotch with water will be fine.”

“You can have both if you can’t decide.”

“I’ll settle for the bourbon then.”

While she fixed the drinks at the bamboo bar with the Micarta top ($98.75 plus tax at all Modern Rattan Stores) I put the paper and pencil on the coffee table in front of me. A good interviewer doesn’t take notes. I had only brought out the paper as a prop to show that I was calling on business.

“And here we are.” She sat down on the couch again, facing me.

“To Marion Huneker,” I raised my glass, “wherever she may be.”

Over the rim of my glass I fixed my intelligent eyes appraisingly on the woman. She had evidently made an effort to prepare herself for my arrival, but she hadn’t quite made it. Her tawny hair had been brushed, and it swirled about her shoulders with a careless effect. She wore a pair of bullfighter toreador pants that hit her just below the knees, and they were fashioned from a shimmering gold material of some kind. A male-styled white shirt, tied by the tails at her slim waist, was much too large for her, and her formidable bosom wasn’t as evident as it had been in the tight evening gown she had worn the night before. The shirt collar was open at the throat, and although she had powdered after a shower or bath, the powder was caked here and there on her neck. These patches of pink caked powder irritated me, as did the woman’s oversight in failing to remove a tiny fleck of yellow matter from the corner of her left eye. A “sleepy” is the term for this tiny piece of matter that forms in a person’s eye when sleeping. I see too much sometimes, and I was being hypercritical, which wasn’t fair…

“Can you give me one good reason why Mrs. Huneker killed herself?”

“You’re such a serious young man!”

“Why do you keep saying that?” I said irritably.

“Because you frown so! If you didn’t glower, you could be quite handsome, Mr. Hudson.”

“Handsome is as handsome does, I always say. It’s an axiom we ugly men must live by.”

“You’re far from being ugly—”

“Well, you’re close to being beautiful.”

“I am. I want to know why Marion Huneker killed herself and her two children.”

“My editor has prostate trouble, and he’s afraid to go to a doctor because an examination might turn up a cancer. Being afraid of death himself, he is outraged when somebody takes their own life. Especially a well-to-do woman like Mrs. Huneker, who has no apparent reason to die.”

“And he wants you to write about her suicide?” Mrs. Chatham wrinkled her nose distastefully. “Isn’t that rather morbid?”

“Newspaper readers are a morbid lot, Mrs. Chatham; they enjoy reading about death in every form. We report knifings, matricides, patricides, infanticides, and suicides, and the obituary column is the most popular feature of the paper. On state-sanctioned electric chair murders we send a personal representative, and we describe all highway deaths as colorfully as possible. If we were unable to devote a goodly portion of our pages to wholesome, violent death, our circulation would drop drastically. And without a healthy circulation, we couldn’t charge so much for ads.”

Article continues after advertisement
“Can you give me one good reason why Mrs. Huneker killed herself?”

“I see. But why would anybody be interested in Marion’s suicide? Other than morbidly, I mean?”

“Suicide, more than any other form of death, makes people indignant, that’s why. The life force is all we have, and when people kill themselves, it frightens the survivors. I think my editor wants me to come up with some valid reasons. If so, we can encourage others to commit suicide, and by reporting their deaths, increase our circulation. Suicide, once it starts, comes in waves, like a fashion. A lot of people, who have considered it but haven’t acted for one reason or another, are often encouraged by the brave example of another.”

“I’m afraid I don’t like your editor, Mr. Hudson.”

“Did you ever witness a death; see someone killed right before your eyes?”

“Neither did I, but that was one of my first assignments when I started on the paper as a cub reporter. Mr. Curtis is against capital punishment, you see, and to make certain that all of the members of the editorial staff see it his way, he assigns new writers to cover electric chair murders at Raiford. Before I made the trip to Raiford I was merely indifferent to capital punishment, but now I’m  definitely opposed to it. Afteryou see a boy of twenty killed in the chair, your realize that it is you personally pulling the switch on him.”

“Are you really serious?”

“Yes I am. I’m a voter, and as a voter I should be doing something about getting this penalty abolished. To see such a death is to take it seriously. Every year about one out of five hundred thousand Florida residents die in the chair. I realize that this is a small percentage, but suppose your good friend, Marion Huneker, had failed to kill herself after murdering her children? Would you have been willing to pull the switch on her?”

“I think it’s too early in the morning to talk about such hypothetical questions. And really, Mr. Hudson, I don’t think I can tell you anything about Marion that could help you.”

“Suppose you try, and then let me decide?”

“My husband’s a lawyer, as you know, and he wouldn’t want my name in the papers in connection with Marion’s. I know he wouldn’t.”

“I won’t use your name, I promise. I’m concerned with her motivation, and right now, I’m not even positive I’ll use Mrs. Huneker’s case for my series. It might be better to make it a Jane Doe story. But either way, your name won’t be mentioned.”

“If you really think I can help…?”

“How long and how well did you know Mrs. Huneker? As a starter.”

“We met the Hunekers right after we moved down here from Manhattan. Mr. Huneker was new here, too, and my husband specializes in corporation law. Jack was one of my husband’s first clients; he needed help setting up his business when he was getting started. For awhile, we sort of banded together, both families, but Victor and Jack had nothing in common outside of business. As our circle widened, Victor and Jack seldom saw each other anymore, but Marion and I were still very close, and we got along fine. Actually, Marion and I had little in common either, but she was a friendly person, and I liked her.”

“What kind of a background did she have? I know very little about her.”

“She was second generation Italian, and very religious, like many Roman Catholic women. Her husband never attended church. Her father owned an expensive men’s shop in Philadelphia; not rich, but he was far from being poor. So she had an excellent education, if Catholic schools give good educations. I’ve never attended a Catholic school—my parents were Christian Scientists, when they happened to think about it.”

“What type of mutual interests did you and Mrs. Huneker have then?”

“Nothing specifically. We both talked to each other, and we were interested in what each other said, but I can’t think of any burning interest we shared together. This sounds silly, now, as I talk about it. We both subscribed to the Book-of-the-Month Club. I would buy the book of the month and she would buy one of the alternates, and then we traded copies after we read the books. We had them both ways, you see, and we checked with each other to be sure we both didn’t order the same bonus books.”

“Is that the only reading she did? Book-of-the-Month books?”

“Of course not. We often borrowed books from the library. We have a good public library in Lake Springs, as you know. I was merely trying to think of some specific interest we shared. There must’ve been others. We swam in the pool at the Beachcomber’s, and sometimes we played bridge at the club, or met downtown for lunch and shopping.”

“How did Mrs. Huneker treat her children?”

“Like children, I suppose. I don’t have any myself, but her children were well- behaved, and I liked them well enough. Not being around them very often, it was easy to be fond of them. Sometimes she told me things they said that were funny and so on, but she wasn’t one of those doting mothers who only lives for her children. That sounds idiotic in view of what has happened doesn’t it? I mean—”

“So far you haven’t told me a damned thing, Mrs. Chatham.”

“You’re supposed to be asking the questions,” she said sharply.

“I told you I couldn’t help you, in the beginning.” She quickly drained her glass, picked up my empty, and fixed two more drinks. When I sipped from mine I found that this time she had given me scotch and water instead of bourbon. A damned poor memory, in my opinion, but perhaps she was rattled…

The World of Raymond Chandler
and 'The Big Sleep' 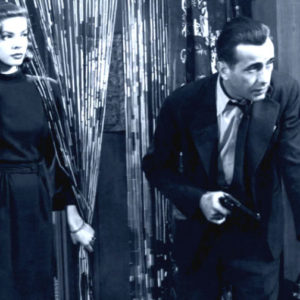