Be Careful Which Stories You Tell a Working Crime Author

Whenever a new book comes out, we writers have to find something to talk about. In interviews, at book signings, at literary festivals, we have to persuade readers that ours is the book they want to take home.

Broken Ground is my thirty-second novel. That’s thirty-two lots of questions and interviews, and thirty-two attempts at finding something fresh to say. Or at least, something I can manage to make sound fresh. Don’t get me wrong, I’m not fishing for pity or even sympathy, just trying to explain why you might have heard some of my anecdotes more than once.

Certain questions recur, none more so than, “where do you get your ideas/inspiration from?” It’s not an easy question to deal with honestly. Sometimes the answer sounds absurd in the cold light of day. Sometimes you can’t tell the truth because then you could never go home again. Sometimes it’s intangible, a will o’ the wisp “what if” moment.

I was thinking about this in relation to Broken Ground when a realization struck me. This is the fifth novel I’ve written that features Detective Chief Inspector Karen Pirie of Police Scotland’s (fictitious) Historic Cases Unit, and each of them has been kickstarted by an anecdote—a specific story that someone has told me that has set the wheels in my head turning, possibilities rolling out in front of me like an open road. I don’t know why that should be; perhaps it’s something to do with the nature of cold case stories. They also start with a story, but one whose ending we can’t be sure of.

In this instance, the guilty party was a bookseller. Judy Harvey runs a small bookstore and gift shop in the small Highland town of Cromarty. I went in to the shop looking for something about the Highlands during WWII. North of the Great Glen—the Highland Fault Line—had been a restricted area for much of the war, and I had a vague thought there might be the seed of a story there.

Judy didn’t have what I went in for. But she gave me something much more valuable. She told me about a couple who had stopped in at the shop on their way to Shetland on a sort of treasure hunt. The woman’s father had been stationed there at the end of the war, and they’d been ordered to destroy all equipment that wasn’t being shipped back to the mainland. But her father and his friend had wanted to save a couple of motorbikes that they couldn’t bear to destroy, so they crated them up and buried them.

They always meant to go back for them, but life got in the way and they never did. But now his daughter, armed with a rough map, had embarked on a search for them. The bookseller and I agreed that obviously the bikes hadn’t been found, for that would have been a news story.

But the story lit a fire in my head and became the starting point for Broken Ground where, of course, the bikes are indeed found. Along with something entirely unexpected. And so the story rolls out like a carpet unfurling.

And then something else entirely unexpected happened. Broken Ground was published in the UK a few months ahead of the US publication. Just last week, this email arrived:

“I’m intrigued. You say that Broken Ground was inspired by a story told to you by a bookseller. Was that possibly a lady from Cromarty on the Black Isle? I ask because the basic story is true. My father buried two motorbikes, still in their crates (although not built—they were each in two parts to fit them into smaller crates), on Mainland Orkney, and we have spent many years trying to locate them. A very helpful local man has narrowed the site down to one of two huge fields, which were the site of the army camp where my father was based. We were en route to Orkney a couple of years ago when I got into conversation with the lady who runs the wee bookshop in Cromarty, and I told her the story. That year, we thought we had found the bikes, but it was actually the buried stove from one of the camp huts. The local man (and his friend the farmer who owns the fields) are still looking, and I would love it if, one day, the bikes turned up. My father has been dead for ten years, but it would give me a sense of closure. Incidentally, I DON’T think there will be any bodies there!

I so wish that my dad had been here to read the book. He would have been so pleased.”

Orkney, not Shetland, as it turns out. But the key details of the incident were more or less as I ended up describing them. She was clearly delighted that her father’s story has been translated into a form that gives it a wider audience.

The ending to my Broken Ground anecdote isn’t the one I anticipated. But it serves to remind me that it’s the writer’s job always to be alive to the possibilities. When you go looking for one thing, sometimes you end up with a very different gift. Ideas, it turns out, are indeed everywhere.

Val McDermid’s bestselling novels have won the Los Angeles Times Book of the Year and the CWA Gold Dagger and Cartier Diamond Dagger awards. She is also a multiple finalist for the Edgar Awards; she was a 2016 Edgar Nominee for Best Fact Crime for Forensics, which won the Anthony Award for Nonfiction. She lives in Scotland.
https://www.valmcdermid.com/

The Best New Crime Podcasts of 2018 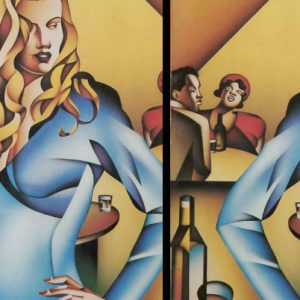 Do you remember the old days when everyone gave rare books as gifts at the holidays? When you'd come rushing down the stairs...
© LitHub
Back to top