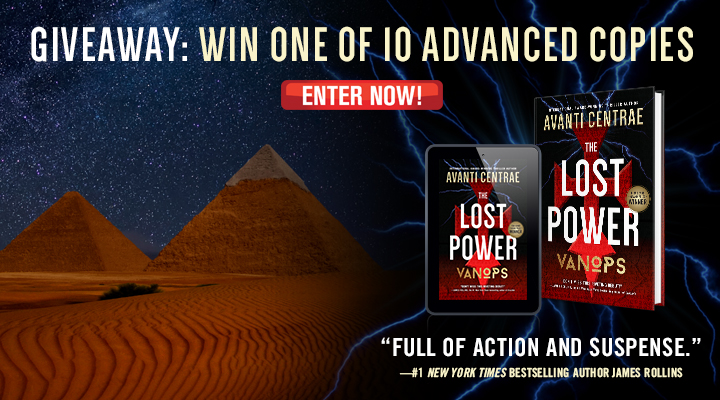 Enter your address below for your chance to win an exclusive copy of VanOps: The Lost Power by Avanti Centrae.

Spain 1057: During a thunderous battle, the first King of Aragon wrestles Alexander the Great’s priceless Egyptian weapon from the Moors, but finds it holds a terrifying and mysterious power.

A thousand years later, on a hushed, fog-shrouded, Napa morning, gunshots and the sound of breaking glass shatter the silence. Maddy Marshall, an app designer and aikido instructor, and her twin brother Will Argones, an engineer, quickly run toward the sound. Horrified, they discover a sniper’s bullet has found its human target.

Before the pool of blood on the living room floor is dry, the twins are sent on an arcane quest to recover Alexander’s ancient weapon. Joined by a VanOps covert agent, they soon discover the rifle’s sights are now set on them. No place is safe, a wrong move means death, and even a simple phone call is off limits if they are to survive.

From a medieval Spanish castle, they follow a time-worn trail, starting at a secret warren under the streets of Jerusalem. But if the killer finds the weapon first, it will be used to cripple the United States’ eye-in-the-sky early warning systems, allowing the Russians to swoop in and prey on the vulnerable nation.

Can Maddy learn to wield the power of the dangerous weapon in time to stop the Russian scheme? Failure means the fragile world peace will be forever shattered…