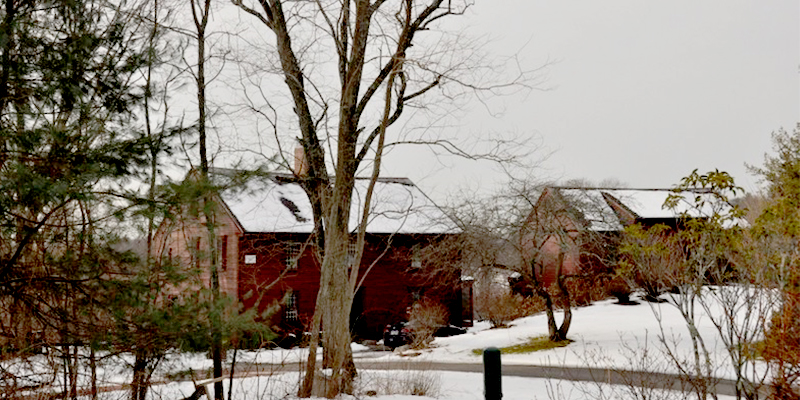 It may be haunted, but the ghosts are rather benign...

By European standards the Noyes-Parris House isn’t amazingly old but it is one of the oldest houses in America. It was built in 1669 by Peter Noyes who was a leading Puritan in Massachusetts and the founder of the Sudbury Plantation, a large tract of land to the west of Boston. The house began its existence as two one-room farm houses only a few meters apart which were later combined around a central chimney stack.  It is unclear whether Peter Noyes ever lived there; it enters the historical record as belonging to his daughter, Dorothy about whom little is known.

Yet it is Dorothy Noyes’s husband who is the really interesting character in the saga of this house. Samuel Parris was an early graduate of Harvard, which was originally founded as a divinical school. After leaving Harvard, he had an undistinguished, and one might say failed career as a sugar cane planter in Jamaica before turning to religion to make a better living. In 1691 he was hired by Salem Village, located north of Boston, as the minister of the settlement. We know he was married with two daughters, a son, and a niece who lived with them. We also know he gave exceedingly long and boring sermons since his original manuscripts have been preserved. None of this was particularly noteworthy. What vaulted him to a permanent place in American history is this: in the autumn of 1692 his daughters and niece claimed to be under the spell of witches.

Thus began the most famous and exhaustively chronicled witch trials in America. Samuel Parris was not a judge at the trials, but he was the spiritual head of a congregation which had developed an acute case of witch fever. By the time the trials came to an end some nine months later, three hundred people had been imprisoned, and nineteen women and one man had been executed by hanging or being pressed to death under stones.

Parris’s wife died shortly afterwards and he held onto his job until 1696 when he was fired by his fractured congregation. Somehow he met and married Dorothy Noyes and moved into her house in Sudbury with his children and niece. In this house, in the room I use as my library and writing room, Parris established the first school house and ministry in the town. He lived in this house on and off for the next twenty years and may have died here. What became of the bewitched girls is unclear.

The house was inherited by Parris’s son who lived in it for a further sixty years before it was sold to a farmer who kept in his family for the next two centuries. In the mid 19th century, the American philosopher Henry David Thoreau used to visit regularly. He was friendly with the owner and wrote about the house in his diaries.

From the day it was built, the house has never been unoccupied. My wife and I bought it in 1999, a major historical renovation about three-quarters finished. We completed the job and have lived here happily since then. It is a wonderful old house with seven fireplaces, low ceilings, many small rooms and a large barn on four acres of land.

Beside the fascinating personal history of the house, there are two other features I must mention. The first is that it is the only 17th century house in America which has retained its original views in all 360 degrees. All other houses of this period wound up being on a main road in a town, with modernity springing up all around. This house is surrounded by fields and woods. The vistas which we see every day are quite similar to what Samuel Parris would have seen. The second feature is (and I am not joking) that the house is haunted. We hear the footsteps and the rattling latches of our ghostly companion regularly, we wake up to moved furniture, and a woman in a black dress and bonnet has been seen on a few occasions gliding around the halls or sitting on a bed in the guest room. She doesn’t scare us and we don’t think we scare her either. We live with each other quite comfortably and harmoniously. 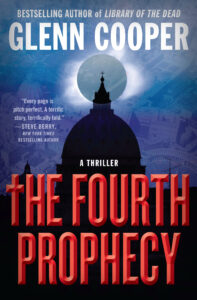 Glenn Cooper is an internationally bestselling thriller writer. His previous books, including his bestselling Library of the Dead trilogy, have been translated into 31 languages and have sold over 7 million copies. He graduated from Harvard University, Magna Cum Laude, with a B.A. in Archeology. Cooper attended Tufts University School of Medicine and then practiced internal medicine and infectious diseases in hospitals, clinics, and refugee camps in conflict zones before joining the biotechnology industry where he was the CEO of several publicly traded companies. Now he writes full-time and lives in Florida and New Hampshire. Learn more at: GlennCooperBooks.com Facebook.com/GlennCooperUSA Twitter @GlennCooper Instagram: Glenn_Cooper 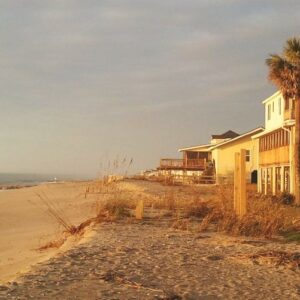 I look for a strong sense of place in what I read and I make sure it’s part of what I write. In my Nils Shapiro books,...
© LitHub
Back to top