When The Lights Go Out 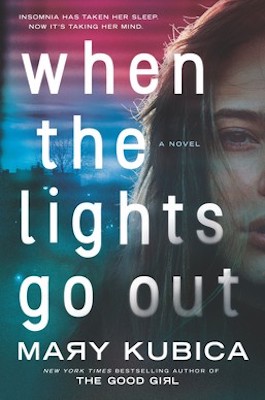 The following is an exclusive excerpt from When The Lights Go Out, the latest suspenseful crime novel from internationally bestselling author Mary Kubica. In the following passage, a woman struggles with her new-found knowledge that she may be legally dead.

“Jessie,” I say, sticking my hand out by means of introduc­tion. His handshake is firm, his hand warm as he presses it to mine.

“Liam,” he says, eyes straying, and I take it as my cue to leave. Because there isn’t anything more to say. The one and only conversation we had in the hospital, words were sparse, but unlike in the hospital we’re no longer killing time, just waiting for people to die. That night, before the conversation drifted to quiet and we sat in silence for over an hour, sipping our coffees, we talked about private things, nonpublic things, things we weren’t apt to tell the rest of the world. He told me about his brother beating him up when they were kids. About how he would lock him out of the house in the rain and shove his head in the toilet, giving him a swirly when their folks weren’t home. Such a bastard, he said, though I got the sense that that was then and this was now. That over the years, things changed. But he didn’t say when or how.

I told him about Mom’s hair and fingernails, both of which she lost thanks to chemotherapy. Her eyelashes too. I told him about the clumps of hair that fell out, and how I watched on in horror as Mom held fistfuls of it in her hands. How there were whole clods of it on her pillowcase when she awoke in the morning, masses of it filling the shower drain. I said that Mom never cried, that only I cried. It grew back, after the cancer was in remission for the first time, soft fuzz that grew a little thicker than it was before chemotherapy. A little more brown. It never reached her shoulders before the can­cer returned.

“You should get back to the wake,” I tell him now as we stand there in the middle of Daley Plaza. But he only shrugs his shoulders and tells me that the wake is through. That ev­eryone split.

“The funeral’s tomorrow,” he says as I wrap my fingers around Old Faithful’s handlebars. I don’t know what to say to that. There isn’t anything to say to that.

Turns out, I don’t need to say anything. “You never said what you’re doing here,” he says then, but as I’m about to ex­plain I realize that there’s no easy answer for it, because the reason I’m standing outside Daley Center is far more convo­luted than his. And so instead of answering, I sigh and say, “Long story,” thinking that he’ll just say okay and walk away because chances are good he didn’t want to know in the first place. He was probably only being polite because I asked what he was doing here, and so he thought he should too, that he should reciprocate out of courtesy.

But as he shifts in place and tells me, “I have time,” I real­ize that he wants me to stay.

There’s a sadness in his eyes, the likeness to mine uncanny.

We walk. Out of the plaza, down Washington and toward Clark Street, me towing Old Faithful by the handlebar. We walk in the street because it’s illegal to ride a bike on the sidewalk in the city. I don’t know what time it is, but what I can say is that the haste of rush hour is past, the clog of morning traffic like hair in a shower drain. Impossible to get through. It’s gone, as if some plumber stopped by and dropped a gallon of Drano on the street, ameliorating the clog. People move slowly now. They take their time. Without the blockage we easily slip through, weaving in and out of pedestrians and cars.

Article continues after advertisement
I tell him about applying to college, the phone call from the financial aid office. The woman’s cheery voice on the other end of the line, laughing, telling me I’m dead.

“I stopped by vital records,” I say. “I needed to get my birth certificate. Except that didn’t go as planned,” I explain as we turn a right on Clark, which is a one-way street around here. All the cars come directly at us. They miss us by a hair’s breadth at times because there are no bike lanes. Not that it matters because half of the time when there are, cars and trucks illegally park and I have to veer around them and into traffic. The number of bike-related deaths in the city is stag­gering; I just hope that one day one of them isn’t me.

Liam asks why getting my birth certificate didn’t go as planned. He’s a good ten inches taller than me, broad in the shoulders but narrow around the hips. At just over five feet, I’ve always been on the short side. My whole life, for as long as I can remember, I’ve been short. Kids in school used to make fun of me. They’d call me names like shrimp, peanut. Squirt.

He towers over me, his body slim but in the tailored clothes, he doesn’t look too thin. I remember him in the hospital— oversize sweatshirt and jeans, getting swallowed up by fabric. Then he looked thin.

I start at the beginning and tell Liam the whole story. Oth­erwise it won’t make sense. And even then it doesn’t make much sense because I’m having a hard time wrapping my head around it myself. I tell him about applying to college, the phone call from the financial aid office. The woman’s cheery voice on the other end of the line, laughing, telling me I’m dead. I tell him about the wasted time spent trying to find my social security card, the worthless trip to the Social Se­curity Office. The one that led me here, to the Daley Center in search of my birth certificate, though that too was a waste.

“I don’t have a birth certificate,” I close with. “At least not one in the state of Illinois. And without a birth certificate or a social security number, there’s no way to prove who I am or that I even exist. But what freaks me out even more,” I admit, “is this implication that—”

But before I can get the words out, birds swarm around me, moving in from all directions. Pigeons with beady eyes and little bobbing heads, pecking at something on the street. They fight over it, their squawks loud and angry. I try to side­step them, but their movements are arbitrary, aimless; there’s no predicting where they’ll go. I step on the tail feathers of one by chance and it scurries, wings slapping together to get away from me.

As I go to take another step, I see what the skirmish is all about. It’s another pigeon, dead, lying on the street where my foot should go. The other birds move in on it, pecking at it, trying to eat it, and just like that, there’s nowhere for me to put my foot. It throws off my stride, makes me lose balance. The dead pigeon lies on its back, spread-eagle-like. Its wings are fanned on either side of its body, white belly exposed, its neck turned too far in one direction, broken I think. I see only one beady eye, the other somehow missing. Its beak is tucked into the crook of a neck, and on the street beside it are flecks of blood.

I nearly step on the carcass as my body lurches forward, stumbling, and I’m sure I’ll fall. My heartbeat kicks up a notch or two, hands sweaty, and like that I’m at the mercy of the bird and the street.

Article continues after advertisement
I nearly step on the carcass as my body lurches forward, stumbling, and I’m sure I’ll fall. My heartbeat kicks up a notch or two, hands sweaty, and like that I’m at the mercy of the bird and the street.

I let go of Old Faithful’s handlebars by accident. I watch as she topples onto the street, certain I’m about to go with her. People turn to see what the racket is, the clang of the bike on the street, the sound of my scream. My hands reach for something to latch on to, coming up empty until Liam grabs me by the wrist, steadying me.

“Jessie?” he asks, and I have to fight for a minute to catch my breath. I’m breathing hard, seeing only pigeons nipping the bloody flesh of a dead bird. And I’m thinking about that bird, wondering what happened to kill the bird. How did it die? If it was killed by a car or a bike, or a run-in with a build­ing window maybe. Maybe it flew headfirst into the Thomp­son Center before sliding down, down, down to the ground.

“Jessie?” Liam asks again because I still haven’t replied. His eyes watch me, uneasy, as he makes sure I’m steady on my feet before leaning down to reclaim Old Faithful from the street.

“Are you okay?” he asks, and, “What happened?” and I shake my head and say, “The damn bird. Those pigeons.”

I turn to point them out to him. But when I look back on to the street behind me, there’s no bird. No pigeons. The only thing there is a squandered hot dog that lies on the as­phalt. Half‑eaten, gravel stuck to what remains of it. Chunky green relish spilling from the bun, red ketchup splattered here and there like blood.

There was never a dead bird.

The world loses balance all of a sudden, the street beneath my feet unpredictable and insecure. I think of sinkholes, when the earth suddenly decides to give, roadways collapsing like Play-Doh, sucking people in and swallowing them whole.

I shake my head. “Just tripped over my own feet,” I say, but I can see in Liam’s eyes: he doesn’t believe me.

Liam waits for me to finish whatever it is I was saying be­fore I saw the bird, but now my train of thought is gone. I can think only of the bird, the pigeons, the flecks of blood. And so he reminds me. And then I remember.

What freaks me out the most, I tell him, is the implication that I’m already dead.

The State of the Crime Novel: A Roundtable Discussion (Part 2) 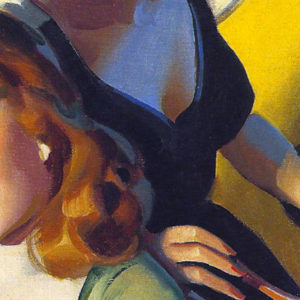 The State of the Crime Novel: A Roundtable Discussion (Part 2) Right now, thousands are gathering in St. Petersburg, Florida, for Bouchercon, the biggest mystery conference in the United...
© LitHub
Back to top