You don’t need a long weekend in April to enjoy a good international thriller binge, but it helps. In some corners of the world, there’s an Easter break right about now, which if memory serves was the traditional weekend to watch Cecil B. DeMille’s The Ten Commandments, not an activity people indulge in too often these day, though that’s not going to stop me from doing my Yul Brynner imitation all weekend. The point is, some of us are already programmed for a good long binge this weekend, preferably one that spans continents and involves some interesting clothes, so let’s dive in and see what the new offerings are for all your international thriller needs.

This is the latest project from Álex Pina, the creator of the worldwide sensation, Casa de Papel/Money Heist, now working with Esther Martínez Lobato to helm a series about three sex workers who go on the run from a nasty pimp. It’s shot on location in Madrid and the Canary Islands, and it’s the usual high-octane, stylish, addictive story we’ve come to expect from this team. Pina and Martínez Lobato have described the show as “Latin Pulp,” and that pretty much tells you what to expect. The episodes are just under a half-hour each, so you’ll tear through this pretty quickly. A new season has already been announced with a July release.

The Serpent
Seasons: 1
Where to Stream: Netflix

The Serpent, to be quite honest with you, is a bit of a mess. Here’s the draw: it’s a BBC-produced true crime drama following the life, crimes, and flight from justice of Charles Sobhraj, born in Vietnam, raised in France, who is believed to have killed a dozen or more in the 1970s. There’s plenty of good globe-trotting to the series, and if you’re purely in the mood to watch a show with some far-flung locations and interesting clothes, this might well work for you. In terms of the storytelling, it doesn’t really hang together, can’t get its tone or approach straight, and refuses to really grapple with the the acts of its subject, relying instead of the flash and verve of the era. But, if you can put that aside and want to watch, it’s going to drop on Netflix this weekend, so go right ahead.

Wisting
Seasons: 1
Where to Stream: SundanceTV

Nordic Noir is so infused with the aesthetics and preoccupations of a certain kind of 90s American serial killer story that naturally enough someone came along and decided to just mash the two genres together. Based on the novels of Jørn Lier Horst, Wisting tells the story of an American serial killer on the loose in Norway, and the detectives thrown together in pursuit. Expect plenty of brooding shots over snowy landscapes and some torture scenes that are going to be hard to watch.

If you wish all the Agatha Christie characters were Spanish…

How does a lavish period piece with lots of beautiful people in beautiful clothes speaking many beautiful languages, and all of it set aboard an ocean liner sound right about now? Now what if that show transformed into a kind of locked-room mystery after a woman goes overboard? High Seas takes a lot of its DNA from Agatha Christie, but you can also expect some soap-y side plots unraveling ass the seasons progress. It all makes for an enjoyable throwback watch.

Bloodlands
Seasons: 1
Where to Stream: Acorn

A police procedural out of Northern Ireland, Bloodlands is about as intense as they come, following a missing persons investigation that points in the direction of an old assassin and a very dark time in the country’s history. Come to this one only if you’re prepared for a very dark story and some relentless plotting. 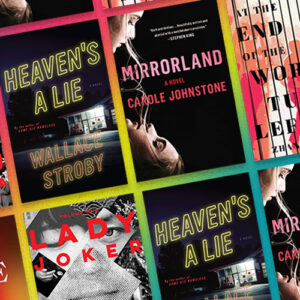 Each month the CrimeReads editors make their selections for the best upcoming fiction in crime, mystery, and thrillers. * Caroline...
© LitHub
Back to top