It’s officially fall in the northern hemisphere and you might well be thinking this is a good weekend to stay indoors with a bottle of something earthy and the bounty that is the contemporary international streaming scene. For me, late September is a time for things that are unusual, inventive, and in that vein I’m personally going to be watching Reservation Dogs this weekend. It’s not exactly an international thriller, or else it would be the answer to the headline above, but by all means you, too, should feel free to enjoy Reservation Dogs, now streaming on FX on Hulu, since it is sort of a crime show, after all, filmed on location in northern Oklahoma and following the exploits of local teenagers willing to hustle and claw their way into a little cash.

But let’s assume you clicked on this for some recommendations from outside the US. So here you go.

Gone for Good
Where to Stream: Netflix
Seasons: 1

You can’t stop European production companies from adapting Harlan Coben novels, and honestly why would you want to? Coben’s modern-day-Hitchcockia works perfectly all over the map, but especially in France, and especially in southern France. Gone for Good is an outstanding addition to the oeuvre, set in Nice, but not the Nice you visited on study abroad. We’re following the turbulent life of a social worker who lost a girlfriend ten years ago and now has lost another, a disappearance that sets him on a trail through an underworld that includes shadowy security outfits, safe houses, neo-Nazi gangs, organized crime, and his brother’s troubled past.

If you’ve already given yourself a city nickname…

There’s a new season of Money Heist available on Netflix. It’s the most popular crime show in the world. You know you want to watch. (There’s also a live experience theater Money Heist show happening in New York, London, and some other cities this fall, so probably it’s a good time to re-immerse yourself in the world of the Professor, Tokyo, et al.)

If you love Jack London and philosophical quandaries…in Spain…

The Minions of Midas
Where to Stream: Netflix
Seasons: 1

The Minions of Midas is a stylish new Spanish adaptation of an old Jack London story of the same name, and it has at its center a question that seems to have preoccupied a lot of 19th- and turn-of-the-century writers: the proposition of randomized death. In The Minions of Midas, a wealthy man (in the show, he’s a publisher) is told that if he doesn’t sell off his fortune, a random person will be killed. That promise is fulfilled quickly and consecutively. The police are called in, nobody knows quite what to do, and the rich man spirals into an existential crisis. All that and you get some pretty shots of contemporary Madrid.

In this cross-border co-production, a German bank investigator is sent to her hometown in Romania to root out of a hacking collective that has been targeting the German financial system. She links up with a young boy in possession of some pivotal information and tries to keep him away from the proverbial bad guys. The series delivers some pretty good thrills and offers some eye-opening glimpses into the world of Central European hacking nests.

If you like British mysteries that reference the “dark arts”…

British mystery is (once again) all the rage in the States these days, and just in time here comes a new adaptation of the Peter James novels. Now, you might quibble with including this in a column dedicated to bingeing, since technically there are only two episodes, but they’re those really long British episodes that are more like feature movies, so I think you’re going to get your money’s worth. Detective Roy Grace is a dogged investigator with some paranormal interests and a tragically deceased wife whose memory haunts him still. He’s enlisted to take on a new missing persons case, and pretty soon the clues turn uncanny. Expect plenty of brooding and mysterious mutterings and a story that will have you on the edge of the couch. 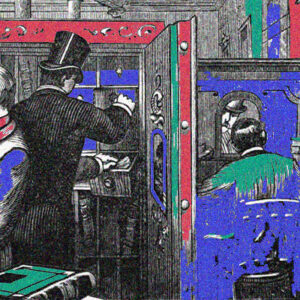 Thomas Byrnes was still in his Sunday best on the morning of October 27, 1878, when he heard that the Manhattan Savings Institution...
© LitHub
Back to top