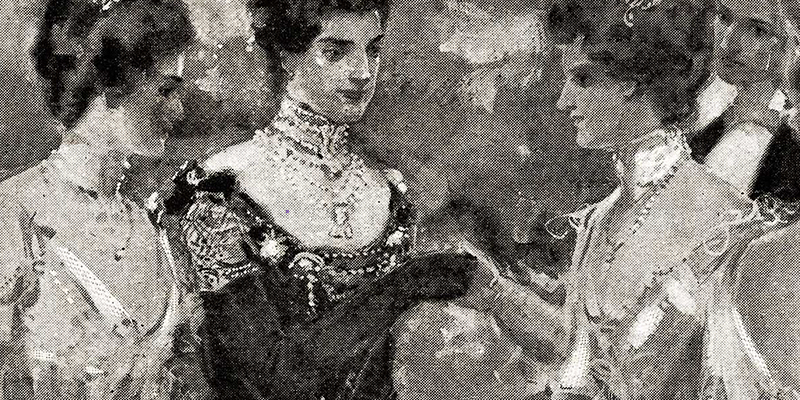 A historical fiction writer researches the history of jewels, and the women who wore these baubles best.

The New York Times Paris correspondent reported on May 12, 1887 that the auction of the French Crown Jewels seemed to be attracting more notice from foreigners than from the French themselves. Judging from the articles that appeared every day in the Times until the sale ended on May 23rd, nowhere was the interest keener than among New York City’s Gilded Age elite. Dispatch after dispatch describes the lots sold each day, prices paid, and the names of the successful bidders. The detailed descriptions are both fascinating and fatiguing to read. Too many brilliants to bedazzle the imagination’s eye; too many carats to add up and keep track of; too many necklaces, tiaras, earrings, brooches, rings, stomachers. Excess that eventually exhausts.

The Tiffany representative assured the Times reporter that while some private buyers were undoubtedly influenced by the lure of jewels once worn by royalty, Tiffany and Co. had not allowed historical or romantic associations to influence their bidding or the extent of their purchases. Gilded Age society’s favorite jeweler had bought more than a third of the offerings, and what they didn’t immediately sell to favored clients they planned to bring back to America. Very businesslike. Very cool, calm, and collected.

But diamonds were never meant to lie in bank vaults and be displayed in jewelry cases. They only come to life in the hair and on the skin of women made irresistible by their scintillating fire. Caroline Astor, The Mrs. Astor, uncrowned queen of Gilded Age society, owned and wore more diamonds than any other socialite. Emeralds, too. She loved emeralds. Regal in black or dark blue velvet, she greeted her privileged guests beneath a portrait that left no doubt in anyone’s mind of their hostess’s place in the world. Plain, double-chinned, stocky, and not tall enough to exude a swanlike grace, Lina Astor was famous for the quantity and quality of the jewels she wore at the balls she hosted and attended. No one dared try to outshine her.

But what if someone did? What if a wealthy banker commissioned Tiffany to create a very special  necklace for his wife, a necklace composed entirely of diamonds once intended for Queen Marie Antoinette? A man’s wealth and position was reflected in the Fifth Avenue mansion he maintained, the number of servants he employed and the carriages in which he rode. In the House of Worth gowns his spouse wore and the spectacular jewels he bestowed on her. When it came time to create the necklace that would be at the center of Death, Diamonds, and Deception, it had to be made entirely of stones originally purchased for the guillotined French queen.

I had to educate myself about diamonds and I had to create a character who would be able to spot a fake as easily and accurately as a trained jeweler. Welcome, Lady Rotherton.

Did you know that you can breathe on a stone to tell if it’s a genuine diamond or a paste imitation? I didn’t. And then when I learned how to do it and what to watch for, I breathed and exhaled, breathed and exhaled—the warmer the breath the better—until it felt like I’d been blowing up too many balloons. The real diamond won’t fog up. It clears almost instantly. The fake stone loses its luster and gets damp. If you keep breathing on it long enough, it starts to look like a car windshield in the rain. I don’t recommend this. There are a lot of other things you can do to test a diamond, from the always popular scratch across glass to squinting through a jeweler’s loupe to look for the small natural imperfections that manufactured stones don’t have.

If you’re writing fiction and the fake stone needs to be discovered at a Delmonico’s ball, the jeweler’s loupe is out, and so is the scratch across glass. Hundreds of guests are dancing and drinking champagne. They’d notice if you walked around with a loupe in your eye or hauled diamond bedecked matrons to a window and ordered them to run their stones across the glass. It had to be the quick hot breath by a lady holding smelling salts under another lady’s nose. I tried  it. It works.

The necklace itself had to be spectacular, had to rival anything Mrs. Astor possessed. I wondered if King Louis XVI thought of gifting his queen with a waterfall of diamonds when she finally gave birth to the long awaited Dauphin in October 1781. They’d been married for eleven years, a long time to anticipate the arrival of a male heir. I thought he might have commissioned a jeweler to design a necklace worthy of the mother of a future king, that he might even have gone so far as to set aside some of the Royal Treasury’s best diamonds.

Article continues after advertisement
Diamonds practically demand to be stolen.

Louis had grown genuinely fond of Marie Antoinette over the years, but he was forgetful, indecisive, incommunicative, and more interested in the intricacies of locksmithing than the jewels his queen wore. He meant well, but he was easily distracted. So the design for the necklace was never approved, the jeweler accepted other commissions, and the stones remained in the Royal Treasury. Until the auction a little over a hundred years later. When Tiffany bought them and brought them to New York City. Where they waltzed into the book I was writing.

One of the most enjoyable things about writing historical fiction is filling in the blanks that historians are too disciplined to guess at. I looked at diamond necklaces and portraits of Marie Antoinette, pinning imaginary cascades of diamonds around her slender neck, deciding for Louis what would best impress the court and reward the woman who had given him a son. Then I looked in the mirror and pictured what I would like if I were Marie Antoinette. That did it. I settled on a triple strand waterfall necklace that would scatter diamonds all across the décolleté of my Paris designed ballgown. Perfect. The banker approved. Mrs. Astor would be livid with jealousy.

Diamonds practically demand to be stolen. The aura of mystery that surrounds the most breathtakingly beautiful stones only increases as they pass into legend. Intrigues and superstitions multiply. Recovery becomes a quest as all-consuming as the search for the Holy Grail.

The necklace I created had to suffer much the same fate, so I researched famous thefts. Too hard to manage. I wanted something more subtle. Then I read that it wasn’t unknown for down at heels aristocrats to pry a precious stone or two or three or four from a treasured family heirloom, replacing them with reasonably decent fakes. With time and enough gambling losses, a considerable number of diamonds could disappear. Recut and sold to jewelers who weren’t too concerned about their provenance, they simply vanished, rarely to be recovered. And if Lady Rotherton weren’t around to breathe on all the necklaces in a given ballroom, who would know?

Learning about diamonds and how skilled jewelers work is a research rabbit hole down which I enthusiastically tumbled. I invite you to join me there. There are more articles about the French Crown jewels than you’ll have time to read. More glorious pictures to look at, catalogues to read, and descriptions to interpret than you could have imagined. Read the New York Times archives for May 12th through May 23rd, 1887. The articles will transport you to the auction rooms and the excesses of a bygone era.

There just might be something there you want to bid on. 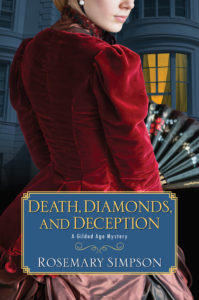 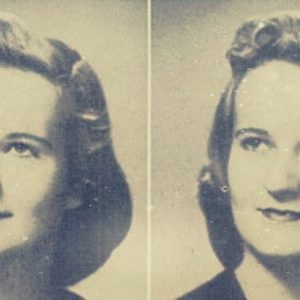 One: The Accident Three boys, best friends, went to dinner at the Santa Barbara Armory on the night of February 23, 1956....
© LitHub
Back to top