On Deadwood's real-life origins, legendary figures, and why Wild Bill Hickok had to die so that the town could live.

As satisfying as it is to see Timothy Olyphant wearing a hat and holster again, and to hear Ian McShane once more hurling lyrical profanity around his Gem saloon, my favorite character on Deadwood will not be back, unless some surviving character summons him in a dream.

He lasted only four memorable episodes, but in that time, Bill Hickok drew most of the camp’s oxygen, dominating its poker tables and mentoring the eventual Sheriff Seth Bullock, to whom he transfers the job of protecting the widow Alma Garret and her gold claim against the predations of Al Swearingen. 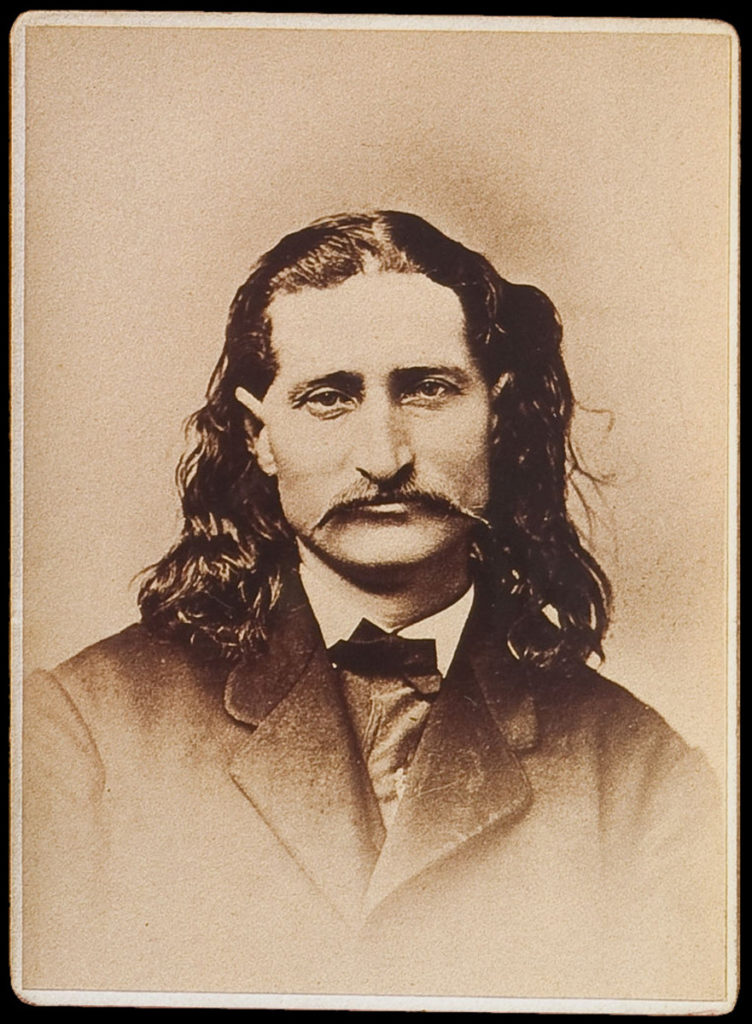 No one in the historical Deadwood had seen the charismatic likes of this gunfighter, scout, lawman, horse thief, and poker player when James ‘Wild Bill’ Hickok arrived in early July 1876, ostensibly on a prospecting mission to the Black Hills like other arrivals. He had left his wife waiting in Cheyenne on the prospecting excuse, but it turned out he had come to the mining camp seeking dissipation more than gold, the call of the table proved stronger than the lure of panning cold streams and he began to take the camp’s money at table. As he says to his friend Charlie Utter in the series, “Can’t you let me go to Hell in my own way?” That meant drinking and poker, and, if trouble appeared, defending his deadly reputation. (He’d already played himself in a production with Buffalo Bill called “Scouts of the Plains,” in which the two famous frontiersman shot targets on stage.) Deadwood was beyond the law, a rough gathering of squatters on Lakota lands, where he should be left largely alone to go to Hell in his own way as he neared forty.

Hickok had Custer-length hair and a pistol-pocket he had designed especially so he could retrieve his weapon from under his vest in case his poker was disturbed. One night he was approached by a man who boasted he “had the drop” on him, reported the San Francisco Chronicle. Bill appeared unarmed, but…

“calmly looked over the tough’s shoulder and, pretending to address somebody behind the fellow, said: ‘For God’s sake don’t shoot the man in the back!’ The tough turned his head in alarm to see who had the drop on him and in less than a second Bill put a bullet through his brain.”

Hickok would soon learn that even his revolver could not save a man whose back was to the door. 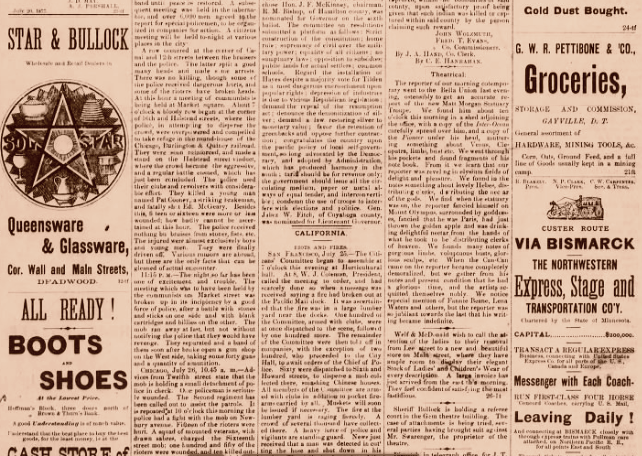 The show has adhered to a number of muddy facts of the real Deadwood, but the death of Wild Bill didn’t have to so closely follow the sad script of real life. After relieving a bitter drunken character named Jack McCall of his money at cards on the morning of August 2nd 1876, Bill gave McCall a coin and told him to go get breakfast. This act of lordly kindness from Hickok seems to have set McCall’s many churning grievances into action. He returned hours later to Nuttal & Mann’s saloon, where the great Wild Bill still sat at the poker table, but now with his mane uncharacteristically to the door.

“Jack McCall walked in and around directly behind his victim,” reported the Black Hills Daily Times, “and when within three feet of him raised his revolver, and exclaiming ‘Damn you, take that!’ fired, the ball entering the back of the head and coming out at the centre of the right cheek, causing instant death…” Word spread by three o’clock, when the Daily Times reporter reached Nuttal & Mann’s: “We found the remains of Wild Bill lying on the floor. The murderer, Jack McCall, was captured after a lively chase by many of our citizens.” When she heard, Calamity Jane pronounced the killer “a dirty rat.”

I love almost any kind of Western where they don’t sing, but Deadwood has been something different: Any show in which corpses are regularly fed to pigs is less a conventional Western than a historical crime show. Its appeal for me has never hinged on the strict accuracy of its dialogue, which, while pungent and often soaring, is a perfect mixture of frontier editorialist and 1970s New York station house.

But with so many other plot points darkened or bent from the true events, why did the writers have to keep so faithful to the sad truth of Hickok’s short time in Deadwood? After Hickok fatally turned his back to Jack McCall, a group of miners was convened for an impromptu trial, where they took the killer’s word that Hickok had long ago killed his brother back in Kansas, when he was a Marshal. (This claim remains murky, if possible.) None of the jurors knew Hickok well enough to challenge the alleged fact in McCall’s motive. The earlier shooting certainly fit with Hickok’s legend, which he had burnished himself. The outrage of the verdict was rectified in a second trial in Yankton (allowed since Deadwood was technically Indian Territory and thus ineligible for “double jeopardy”). McCall was hanged.

For four episodes of Deadwood the series, Hickok was played with weary elegance by Keith Carradine, in his greatest role since Will Rogers. Hickok certainly was not typical of the shoddy camp where he ended his days: In fact, he was a glamorous exception to it, indifferent to its real reason for being (gold) and interested only in its being a place largely beyond the law. The assassination of Wild Bill by the drunken coward Jack McCall might have made a memorable finale for that first season, except his continued presence delayed the arc of Deadwood’s sheriff Seth Bullock from hardware man to romantic interest for the Widow Garret. As Bullock’s mentor and reigning gunfighter in the camp, Hickok had to die so the town could dramatically develop. McShane’s Swearingen could not move forward with his schemes blocked by Bill’s moral presence. Still, I don’t have to like it.

He was a glamorous exception to it, indifferent to its real reason for being (gold) and interested only in its being a place largely beyond the law.

The real Swearingen seems to have been a little more aspirational for his growing town than the show portrays (later throwing the occasional grand masquerade in his Gem theater) and the town itself was a little less murderous week to week. But there were plenty of stories that are quite recognizable to viewers of the show: on the morning after Christmas 1877 Edward Trimpy left the Gem where he worked and went into the ‘Pearl’ saloon…

“and there became engaged in a dispute about a ten dollar bill, which Kitty Sparrow, better known as ‘Tricks,’ declared he had taken. He denied the charge and threatened to ‘bang’ the girl should she repeat it. She replied that he would ‘bang’ no one and stepped behind the bar where she secured and displayed a five-shooter ‘bull dog.’”

When Trimpy ran around the counter toward her ‘Tricks’ “raised the pistol and fired.” Trimpy was carried to his room at the back of the Gem and his head wound “probed” but deemed inoperable. That scene would slip easily into any season of the series. All that’s missing are the pigs.

Wild Bill left Deadwood too soon, and can never return. I have made my peace with that, but I do have a suggestion for how he might live on, if the show were extended. In July 1881, a teenager really did board a stagecoach for Deadwood, carrying a photo of the late gunfighter, and planning to visit Wild Bill’s grave. He was described as Hickok’s visiting son and “a deaf-mute.” What a marvelous thread the arrival of Wild Bill’s alleged son in the town might make, a revenge/impostor plot for a new season: Swearingen gets nervous about the intentions of the “deaf-mute,” who keeps his own counsel, and Al demands that his henchmen check him out; Bullock takes an interest that is at first fatherly and then suspicious; the deaf-mute son sits then down for a strange round of poker at the very table where Wild Bill played his last; he faces the door and waits for trouble.

Behind the Scenes of the True Crime Podcasting Boom