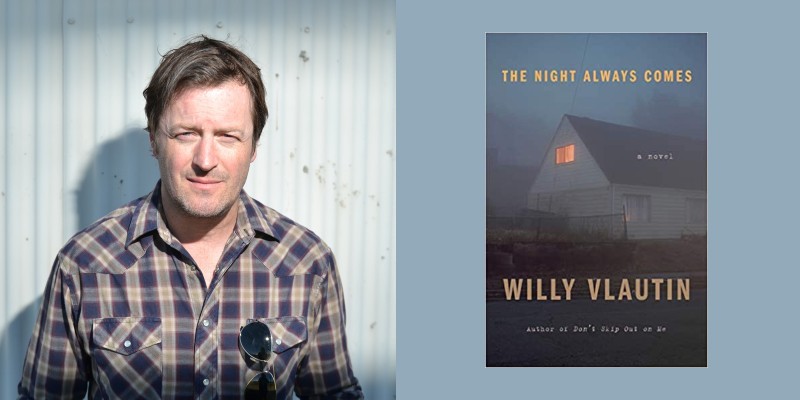 Willy Vlautin, a 54-year-old novelist and musician living in Portland, Oregon, has steadily constructed a body of work that possesses sociopolitical power, without compromising on literary merit, holistic character development, or nuance and complexity. David Mamet, the Pulitzer prize winning playwright, essayist, and screenwriter, has often cautioned writers with grand ambitions to never drift too far from the campfire. The primary purpose of the storyteller is to entertain. Vlautin certainly entertains, but also meets grand ambitions.

His latest novel, The Night Always Comes, is his best work yet. A hybrid of John Steinbeck and James M. Cain, its protagonist, Lynette, is a young woman working two menial jobs while, along with her cynical and selfish mother, also taking care of her developmentally disabled brother. When her mother backs out of cosigning a loan to purchase the house in Portland that they rent, Lynette scrambles to scrape together sufficient funds to buy the home. Her lousy credit eliminates her from independently qualifying for the loan. 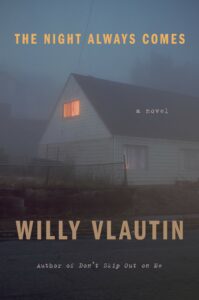 She then navigates the underside of Portland that she first explored when moonlighting as an escort. Her struggle to obtain something as simple as a home in a city with rapidly rising real estate costs forces her to deal with a variety of ruthless men and women who earn their living in the underground economy. There are drug deals, the theft of a safe, assault, stab wounds, and other hardships that accompany a tour of an American universe that is perpetually percolating directly underneath the surface of strip malls, suburbia, and vapid talk of “economic growth.”

The entire story of The Night Always Comes unfolds over a period of two days; one breathless weekend Lynette is lucky to even survive, let alone acquire the substance of modest dreams. To fill out the background, the narration is replete with flashbacks to Lynette’s previous episodes with depression, the emotional and financial losses that have transformed her mother into a withdrawn cynic, and her bond with her brother, whose condition is such that he will forever have the mind of a three-year-old.

The characters that Lynette must persuade, fight, or evade range from charismatic and slightly unnerving to absolutely horrifying. Essential to the events that transpire is empathy. No matter how far outside the bounds of law Lynette moves, or how self-destructive her risks become, the reader wants nothing more for her to prevail. She is a troubled, but decent woman who hopes only to care for her brother in a house they like, but lives in a city in a country that has made it impossible for a woman working two jobs to expect to own a house that isn’t even luxurious. There are consistent references to the house needing repairs, the old carpet that looks terrible, and fears of what will malfunction next, along with the daunting bill that is sure to follow.

As much as The Night Always Comes is about Lynette, and her dangerous and ambitious weekend, it is also about the deliberate demolition of the American dream, and with it, the transformation of a society from middle class stability to a giant marketplace where the prevailing ethos is, in the words of Lynette’s mother, “fuck over whoever is in your way and get what you want.”

The strength of the novel is not merely that it packs a sociopolitical punch equal to the right hook of a heavyweight champion, but how it takes its swing. Vlautin has the discipline as a storyteller to avoid didacticism. With the sole exception of one rant from Lynette’s mom (quoted above), the book never directly addresses the political catastrophe that made housing insecurity, extreme inequality, and the economic category of “working poor” possible in the world’s wealthiest nation.

Vlautin has sufficient respect for his audience to expect them to appreciate the context. All he does, as Mamet would have it, is takes us to the campfire. The balance between the politics of material interest and gripping literature is exactly why The Night Always Comes can and should become instructive to an American pop culture that lost its sense of reality, and beamed into outer space.

There are notable exceptions, but too much of American storytelling, whether on the page or screen, now falls into one of two genres: fantasy and farce. In the former, there are the countless superhero, comic book, and magic stories that have come to dominate mainstream cinema. The latter is full of slightly less realistic tales of celebrity drivel, multimillionaire navel-gazing, and endless iteration of the “Real Housewives of Neptune.” The stories of social realism that do exist tend to deal with important issues of race, gender, and sexual orientation, but treat class as if contemporary America is a socialist utopia where distinctions of economic status are distant memories.

Too often contemporary social realism also violates Mamet’s campfire rule. More concerned with the “message” than the characters, plot, or setting, many novels and films have something important to say, but put their audience through a slog to hear it.

The Night Always Comes, contrary to contemporary trends, upholds and advances the best of the crime storytelling tradition. Norman Mailer once explained, while discussing, The Executioner’s Song, his brilliant “true life novel” about convicted murder Gary Gilmore, the first to receive the death penalty following a ten-year moratorium, that crime stories allow the writer to explore “most of the class groups” in America. In The Executioner’s Song, readers meet poor, blue collar families in Utah, along with upper class professionals, such as attorneys, therapists, and judges. Everyone but those on the far margins, whether the homeless or the affluent, have some representative figure in the story.

As much as American crime stories deal with the ungovernability of human passions, from illicit sexual desire to simple greed, they also emanate out of the conditions of a country that places vast importance on wealth, while often failing to present legitimate means of upward mobility to those chasing prosperity. Lynette’s mother, during her bitter monologue, describes the frustration, and eventual corruption, of navigating a society where the social compact has collapsed into the dirt.

With the exception of that half-page speech, Vlautin knows, like Cain, Raymond Chandler, and James Crumley, that he doesn’t have to always point to the obvious. Class is the hand on the back of his characters, pushing them into various directions and corners, some more dangerous than others. Similar to the best stories of the tradition, the reader cannot extract the protagonist from his or her surroundings.

Walter Huff, in Double Indemnity, isn’t exactly a pauper, but he works for an insurance agency. Certainly, the ignoble industry of his employ has exerted an influence on his deficit of ethics. The adventures of Phillip Marlowe, as detailed in Raymond Chandler’s essential oeuvre, deal with the downtrodden, the financially frozen, and the victims of war. Michael Connelly has asserted that the greatest moment in American literature takes place in chapter 13 of The Little Sister, when Marlowe takes a drive through merciless Los Angeles, and concludes, “You’re not human tonight.”

One of the only crime novels that Chandler thought challenged his own supremacy in the genre was Kenneth Fearing’s, The Big Clock. Among its storytelling devices is the presence of an omnipotent corporate sector, always stripping layers of humanity from those who inhabit its domain—a domain that the novel implies will soon include the entire country.

The specificity of setting is important, but similar to New York in The Big Clock and Marlowe’s L.A., Vlautin succeeds with The Night Always Comes by making Portland into America, and America into Portland. Clearly, not every city has undergone as prohibitive gentrification as Portland, but the cost of housing afflicts Americans in every region. A comprehensive study from the National Low Income Housing Coalition in 2020 concluded that a minimum wage worker would have to work two full time jobs—that’s 80 hours per week—to afford a 2 bedroom rental unit in any state in the country. Meanwhile, a recent headline from a Portland, Oregon news network offers a grim assessment to any of the real life Lynette’s out there: “Portland home prices skyrocket with record-low real estate inventory.”

Knowledge of economic intricacies is not essential for comprehension and enjoyment of The Night Always Comes. Anyone can recognize that if housing costs were not out of control, and/or if Lynette’s jobs, bartending and preparing pastries at a bakery, paid higher wages, she would not have to transform her life into an inner-city death-gamble on theft, drug dealing, and prostitution. The obstacles obstructing middle class comfort might not require the average American to contort himself in ways as dramatic as Lynette, but the consequences manifest in ways that are still injurious. What sacrifices does the average family make because there isn’t any savings in the bank account after each month’s bills? After all the physical effects of financial precarity take their toll, what possibility remains for emotional satisfaction?

These are the questions that Willy Vlautin deftly explores in his novel before the action begins, and they become all the more urgent because Lynette is a caretaker. Her brother’s future is at stake, even more desperately than her own. Early in The Night Always Comes, she has no choice but to bring him to an accounting course she is taking at a nearby community college. Her plans to earn a degree are barely off the ground, and now made worse by her brother’s inability to sit quiet and still during her professor’s lecture. He also complains of having to use the bathroom. Realizing that they are not disrupting the entire academic proceedings, she promptly leaves, rushing off to her car, which starts on the third attempt, to cry into her palms before driving home.

It is that quality of image that brands itself into the reading memory when Lynette begins to take increasingly unwise risks. You cannot help but feel invested in her story, deeply concerned for her and her brother’s welfare, and empathetic, even when she makes foolish decisions. You cannot help but feel that you would do exactly the same if you were in her situation, and given the reality of modern America, you might be.

Issues and struggles of class, rather than distract from the character development and storyline, imbue it with force, offering a lesson to novelists and filmmakers less imaginative than Vlautin. Reality as it pertains to storytelling is far from a drag. It is actually key to liberating a story’s potential to resonate, inspire, and entertain.

In an era when pop culture, and even much of the arts, feels trivial, and detached from ordinary circumstances, and when celebrities become better known for their self-congratulatory social media ramblings than any work that they manage to produce, The Night Always Comes is a rare example of art that matters—a rare example of a novel that is heartbreaking, but also a combative condemnation of American injustice, while also a love letter to the beleaguered working class, and still damn fun to read.

Vlautin’s ambition is high, as are the stakes of his novel. If there is any justice—a questionable proposition, as his own literature makes clear—his readership will scale the same heights. 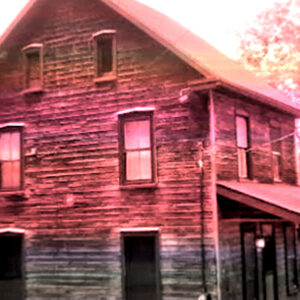 It’s an adolescent rite of passage: wait until well after dark, then load up the car with a few friends (and maybe a six-pack...
© LitHub
Back to top