On 'Our Man in Havana' and the Stories Greene Missed

Writers have long been fascinated with Cuba, that long serpent of an island, the largest in the Caribbean that sits ninety miles from Florida. Just as there is Ernest Hemingway’s Paris and Christopher Isherwood’s Berlin, there is the Cuba of Graham Greene, whose novel, Our Man In Havana, creates a resonant image of expat Havana in the 1950s.  Comedy, violence, passion, scandal. All these are masterfully rendered and leave the reader with an enduring picture of that city.

A while back, I came across the story of William Morgan, an U.S. citizen, who fought in the Cuban Revolution and helped Fidel Castro’s forces defeat President Fulgencio Batista’s army. Morgan was among two dozen Americans who fought in the revolution, and one of only three foreign nationals (another was Argentine Che Guevara), to rise to the rebel army’s highest rank, comandante. Morgan was a big, flamboyant man, who came of age in the Cold War, and like an earlier generation of idealistic young men who volunteered for the Republican cause in the Spanish Civil War, he wanted to make a difference in the world. He found his cause in Cuba’s struggle. Morgan served under Castro until he was accused of being a CIA spy. After a brief trial he was executed at dawn on March 11, 1961 in La Cabaña, the eighteenth-century stone fortress that overlooks Havana Harbor. He was thirty-two. I was drawn to Morgan’s short, tumultuous life and soon found that it helped shape the fictional events and figures that would soon become my second novel.

There was, however, a problem. The events I was interested in, the pivotal moments of Morgan’s life, took place in the months leading up to Batista’s overthrow—the exact time period in which Our Man in Havana takes place. Of course, I had read Our Man in Havana and enjoyed Carol Reed’s film version, shot on location in the city in 1959. I worried, as I’m sure other authors before me have worried, that writing about expatriates in midcentury Cuba would invite comparisons to Greene’s classic novel—and whose work can stand up to that sort of comparison?

Graham Greene’s novel gives life to the decadence of pre-revolutionary Havana as it spins out a comedic tale of a cash-strapped Englishman, Jim Wormold, who successfully cons British Intelligence into paying him for vacuum cleaner drawings that supposedly depict missile installations. The novel begins in El Prado, Old Havana’s main thoroughfare and home to the Wonder Bar, where Wormold begins his day with a drink. Wormold’s daughter, Milly, 17, holds him hostage with her spending habits, and Wormwood is forced to pad invoices to Britain’s Intelligence Service, MI6, by inventing sub-agents in whose name he draws expense accounts and on whose “word” he concocts missile diagrams he takes from appliance brochures. He finds the names of his fictitious agents in the phone book, so they exist in real life, and begin to die when the Cuban police crack his simple coded messages to London.

In his autobiography, Ways of Escape, Greene explains that the idea of the novel came to him while working in MI6 1943-1944. He came across German Abwehr agents in Portugal, who were inventing imaginary double agents and sending false information to Berlin to be reimbursed for expenses and salaries to keep their imaginary sources in the field working on behalf of the Nazis. Greene was drawn to the comedy of the story. He wrote the first version of what would become Our Man in Havana in the mid-1940s—an outline on a single piece of paper. He placed the story in Estonia in 1938, where a British agent’s wife’s extravagance led him to cheat MI6 and as war loomed, his enemies began to take him seriously. Greene didn’t write that novel, but the story remained in the back of his mind resting in a preconscious state until the early 1950s, when he made the first of six visits to Havana.

Greene was drawn to the louche atmosphere of Havana. He enjoyed El Floridita, famous for its daiquiris and Morro crabs, indulged the brothel life, gambled at the fruit machines that spilled out jackpots of silver dollars in hotel lobbies, and visited the Shanghai Theater, where for one dollar and twenty-five cents he could see a nude cabaret of extreme obscenity. In this lush world the story idea reawakened and he realized that Havana was the right place for his comedy.

The dark shadows of war in 1938 weren’t right for a comedy, but now he thought he’d found the right situation and the right period. As he wrote, the right place for the story was there in “fantastic Havana among the absurdities of the Cold War (for who can accept the survival of capitalism as a great cause)?”

Greene, who presciently captured the cynical conflict in Indochina in The Quiet American just three years earlier, takes almost no interest in the underlying unrest that gripped Cuba during his sojourns.

In a few pages of his novel, we come to know Havana—the beauty of the women, the nightclubs, the wild weather streaming in from the Caribbean, and our understanding of the city comes in tandem with the increasing understanding of the danger to Wormwood from his conjuring of fake agents. The outline of the original story is intact, except that the extravagant wife has become an indulged daughter.

Greene’s visits to Havana were short and he used his time to explore the city’s scandalous offerings. He says he never stayed long enough to be aware of the sad political background or arbitrary imprisonment and torture—or was too distracted to care. This is the telling thing about Our Man In Havana. It is a comedy set in the midst of brutal civil war.  Greene, who presciently captured the cynical conflict in Indochina in The Quiet American just three years earlier, takes almost no interest in the underlying unrest that gripped Cuba during his sojourns. Graham, ironically, succumbed to the problem that he had hoped to avoid, setting a comedy in the shadow of war. None of this affected the book’s commercial success, but now the book seems oddly out of joint to its historical setting.

I was happy to discover the novel’s provenance—and relieved. It was a feeling confirmed on re-reading the novel and looking again at the film. Although my story would have some humor, I wasn’t writing a comedy. I was writing about an ex-CIA agent, George Mueller, who arrives in Havana in August 1958 to look into the activities of a former colleague suspected of harboring sympathies for the rebel forces fighting the unpopular Batista regime. It is a story of ideals, passions, betrayals, and corrupting political rivalries in the months before Castro’s triumphant march into Havana on New Year’s Day 1959. The novel addresses the conflict that Greene largely ignored.

No author, even a giant like Greene, can define the experience of a city, and there are always new stories to tell.

Setting may be the novelist’s first critical choice. Choice of setting carries with it the things that draw characters to a place and it establishes a novel’s atmosphere. Setting isn’t an illustrator’s presentation of a location, although that is part of setting, but it is the mood and ambiance of a place that evokes the imaginary world of a story. Setting illuminates the yearnings, fears, attractions, and possibilities that are available to characters who find themselves at a unique moment in a particular place.

William Morgan was drawn to a different Cuba than the one that attracted Greene, and it was Morgan’s Cuba that I found interesting. The tension between democratic ideals and predictable tyranny was on full display. Morgan saw civil war and young nationalists fighting for a better life for their children. No author, even a giant like Greene, can define the experience of a city, and there are always new stories to tell, especially in a place as diverse and rich with history as Havana. 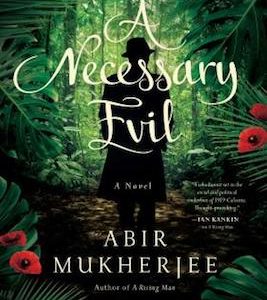 Friday 18 June 1920 It’s not often you see a man with a diamond in his beard. But when a prince runs out of space on his ears,...
© LitHub
Back to top