Is Donald Trump the Last Move in the Cold War?

The cast of characters is almost too much to believe: a Russian pop star, a British tabloid veteran, an attorney with mysterious ties to the Kremlin, a Moscow-funded lobbyist running a White House campaign, a real estate scion married into political power, and the son of the soon-to-be President of the United States. But there it is, laid out in emails for all to see in The New York Times, raising a few unavoidable questions: What constitutes a conspiracy? What’s the Kremlin’s end game? Just what in the hell year is it, anyway? Is the Cold War still on?

Spy literature is looking freshly relevant these days. For more than 50 years, novelists have been puzzling out the clash between Russia and the West, burrowing into the minds of operatives and chiefs on either side of the Iron Curtain. The schemes we find unraveling on the covers of the Times and the Post have close analogues—uncannily close—in the pages of Len Deighton and John le Carré, expanding and complicating our view of the day’s political moment. Reading espionage fiction, you can cover nearly the entire history of the Cold War, from the historical sagas of Furst and Downing to Daniel Silva’s up-to-the-minute thrillers.

Whether you’re looking for a better understanding of the Cold War antecedents or a scathing portrait of the kind of greedy buffoons who tend to get caught up in these Russian conspiracies, or if you’re just hoping for escapism to pass the time until the first Mueller indictments come down, you’ll find some choice summer reading among these titles. And as you make your way through, rest assured that some enterprising novelist is reading the same news as you and preparing to turn this insanity into a reasonably coherent story, starring the pop singer, the black sheep son, and the Moscow co-opted commander-in-chief. 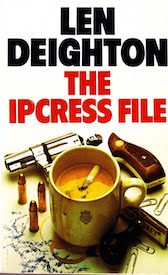 The Ipcress File, Deighton’s first novel, is the book that earned the genre some literary bona fides, and more than 50 years on, it retains its place among the great English-language thrillers. An unnamed British operative is tasked with rooting out a Soviet plot to kidnap and expatriate officials and scientists currently enjoying the protection of Her Majesty’s Government. The job takes our man through the sleaze of the London underworld to Beirut and on to the South Pacific. Nuclear capability is at stake, and a line of dead bodies has been left behind. Leighton established so many of the genre’s staples, but more than anything it’s the narrative tone of The Ipcress File—cynical, paranoid, and savvy—that set the mark for future spy thrillers. 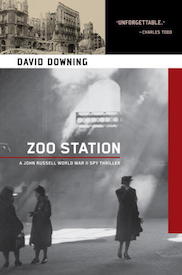 Downing’s John Russell series wrapped in 2013 but has lately enjoyed a surge in popularity thanks to its selection as the first title in an informal book club run by the popular podcast, The Watch. Russell is a journalist working in Berlin in the build-up to WWII. He’s Anglo-American by citizenship, sympathetic to the Russian cause, and father to a proudly German son, so it’s fair to say his allegiances are muddled. But ultimately, he sees the evil coming with the Third Reich and decides to take on some freelance work funded by Russian intelligence. The lush detail of everyday life in pre-war Europe is the great pleasure of these books, but as the series goes on, the spycraft gets quite compelling, too. Germany and Britain are the great forces tugging at Russell, but it’s the Russians who fuel the book’s most interesting dilemmas and adventures. 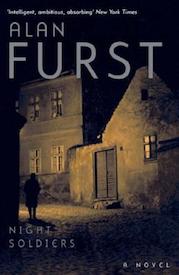 Over the last 30 years, Furst has established himself as the towering figure of historical spy fiction. Night Soldiers is a portrait of the clash between Nazi Germany and the early Soviet state as they struggled for influence in Europe and the Eastern bloc. In Bulgaria, Soviet spies recruit a young man from named Khristo Stoianev. He’s shipped off to serve the cause in Spain, where the Civil War is raging and all the key international players are assembling. When Khristo’s name ends up on the wrong side of a purge coming to Moscow, he takes off for Paris and ultimately falls in with the Resistance. The settings are always intoxicating in Furst’s novels, nowhere more so than in Night Soldiers, which is brimming with life in a wildly tumultuous time. 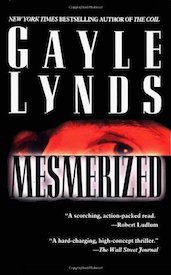 Gayle Lynds, the reigning queen of spy fiction, offers up any number of portraits of Russian intrigue in the US, but Mesmerized presents a particularly unusual and strangely gripping scenario. A young hotshot DC lawyer receives a heart transplant and begins developing Russian tastes and affects. Soon, her thoughts follow suit—snippets of language, dreams, hazy memories. She decides to track down the donor, and naturally that embroils her in a plot hatched by former KGB men who have dispersed to the corners of the globe, including the US. 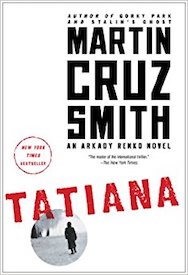 Tatiana is this list’s outlier—a detective novel rather than an espionage thriller, and not strictly about the Kremlin’s spy games. But how could you credibly count down a list of Russian chicanery without an installment of Martin Cruz Smith’s Arkady Renko series? Beginning with Gorky Park, Cruz Smith has launched one of contemporary crime fiction’s great social explorations, by way of Renko, the brooding, independent mind of the Militsiya. In Tatiana, Renko investigates the deaths of a mafia scion and a widely respected reporter. The search takes him to the empire’s edge, where he finds a hidden naval city and begins to unlock the capital’s secrets. 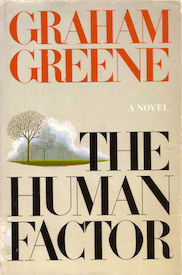 In Greene’s 1978 novel, an MI6 man feels he owes a debt to the Communists who helped his wife escape from apartheid-era South Africa. He begins with small actions believed to be of assistance to the cause on the continent, but ultimately finds himself ensnared in something larger. Greene long denied that this book was based on Kim Philby, his old boss at MI6, but the comparisons run deep, and the author ultimately acknowledged basing certain details on the accounts of Philby’s wife, Eleanor. Greene and Philby were reunited over a series of dinners in Moscow in the late 80s, and among the topics of conversation, according to reports, was Philby’s objection to the excessively dreary Soviet life Greene had built for fictional defectors. 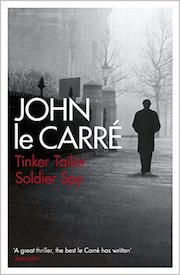 Just about any Le Carré novel would fit the bill, but Tinker, Tailor is the ne plus ultra Russian spy game. There’s a mole at the top of the Circus, and George Smiley, recently drummed out of HM’s service, is quietly brought back to uncover the double agent’s identity. One-by-one, Smiley works the senior staff (methodically, always) in search of secrets and weaknesses. On the other side is Karla, the Russian puppet master, with whom Smiley shares a bit of history. Le Carré is the genre’s high water mark, and this story (another Kim Philby tale) has him at his very best. 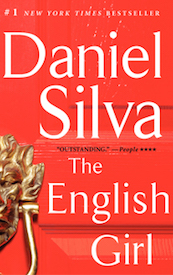 In Silva’s 13th Gabriel Allon novel, the Prime Minister of Britain is having an affair and falls under the sway of foreign agents threatening him with exposure and the murder of his mistress. The trail, of course, leads to Russia, where a tangle of oligarchs, operatives and dissidents lead Silva’s hero toward a political conspiracy. In a recent conversation with Literary Hub, Silva cited The English Girl in discussing Russia’s efforts to support Trump. “This is KGB Playbook 101,” Silva said. “They have been doing this for a very long time, to weaken and divide the West.” 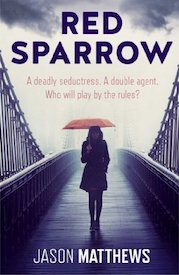 Jason Matthews, a former CIA operative, came onto the scene in 2013, when Red Sparrow earned the kind of acclaim first-time novelists (and longtime spies) dream about. At his story’s center is Dominika Egorova, a kind of lethal Estella Havisham, a Russian operative trained to entice and compromise the enemy. Her foil is Nathaniel Nash, a greenhorn CIA man. The spy versus spy action unfolds at a breakneck speed, but it’s the eccentric character points that make Red Sparrow such an enjoyable read. Most notably, Dominika has a form of synesthesia that allows her to interpret other people’s emotions in the form of colors. That might sound a little far-fetched, but it provides for some poignant moments in the middle of a master-class in US-Russia espionage games. 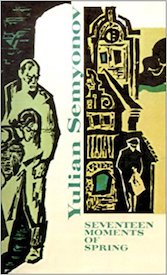 Why not try a Russian hero from a Russian author? Maxim Isaev is a Soviet intelligence operative working undercover in the Third Reich, having penetrated the SS at the highest levels. Himmler is charged with negotiating a pact with the American side of the Allied forces, so that the Nazis can reorganize for a push against the Soviets to the East. Isaev is the one man who can scuttle it all and save the Soviet cause. Is your head spinning a little, Western reader? That uncanny feeling is no small part of the book’s appeal. And if you decide to give over entirely, you may also be able to get your hands on the 1973 mini-series adaptation, one of the great touchstones of post-war Soviet pop culture. 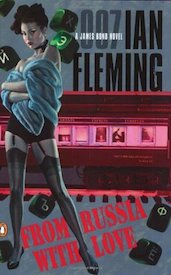 Ian Fleming, From Russia with Love

And finally, 007. Go ahead, enjoy yourself, no need to feel guilty. From Russia with Love is easily one of Fleming’s best, and if you need the extra motivation, remember that at least one US President—none other than JFK—counted this among his favorite novels. Soviet co-intel sends a phony defector—an attractive young woman, as it happens—into Bond’s hands. The goal is to compromise 007 and ultimately dispatch him. (Yes, sex is involved. Tuxedos and negligee, too. A classic honey trap.) 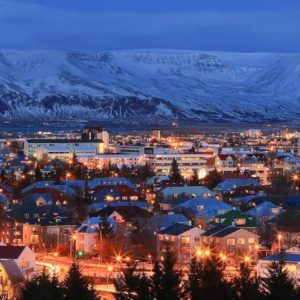 What does Reykjavik bring to mind for most people? A pretty city of charming houses with pastel-colored roofs, Bjork, geo-thermal...
© LitHub
Back to top