What does Reykjavik bring to mind for most people? A pretty city of charming houses with pastel-colored roofs, Bjork, geo-thermal springs, and a particularly messy banking crisis. The city is not known for its crime rate and, if surveys can be believed, its citizens are not overly worried about being murdered in their beds. Visitors rarely get mugged or slaughtered in a city where the biggest problem is usually pronouncing the street names—Kalkofnsvegur, Laugavegur, Arnarhóll, Lækjagarta. The city is a very safe place in reality, but decidedly less so in fiction.

Let’s start in Skuggahverfi, Reykjavik’s so-called Shadow District—the warren of streets that ran from the grandeur of the National Theatre, National Library and High Court down to the abattoirs of the meatpacking yards—which were, during the Second World War, at the very heart of “The Situation.” “The Situation” was the problem of British soldiers, and then slightly later many, many more Americans and Canadians, billeted in Reykjavik from 1940. The British occupied the city after the Nazi invasions of Denmark and Norway to stop Hitler controlling this important trans-Atlantic staging post. The Americans, who effectively ran the country until 1945, took over the occupation in 1941. Icelandic girls inevitably met and rather liked the GIs and Tommies. It got hot and heavy, often around the dimly lit alleys and doorways of the Shadow District. In the 1940s this was a rundown rookery, though it’s now the stylish and centrally located Reykjavik 101 area. In Icelandic crime writer Arnaldur Indriðason’s recent The Shadow District (2017) the murder of a 90-year-old man in contemporary Reykjavik reawakens the ghosts of a wartime murder of a beautiful young seamstress in an alleyway behind the National Theatre.

Indriðason is the biggest name in Reykjavik crime writing with his Detective Erlendur series that started in 1997 with Sons of Dust. The 14 Erlendur novels (only a couple have not been translated into English so far) are phenomenally popular with local readers. If you want an indication of whether or not Indriðason captures his hometown well consider that, in 2004, of the top ten books loaned from Reykjavik’s public libraries seven were Indriðason titles. If there’s one that stands out as the best then perhaps it is Jar City (2000), which, like his later Shadow District, concerns a modern day crime that sheds light on an older, unsolved, case. The Icelandic movie director Baltasar Kormákur turned the novel into a successful film of the same name in 2006. Erlendur worked his last case in 2014 in Strange Shores. It may seem an odd suggestion to start reading a detective series in reverse but Strange Shores is written with such a melancholic feel it is by far the most literary of Indriðason’s works. Erlendur is a reflective sort of cop, always looking back and reminiscing, so reading the series backwards is not a problem.

As we’ve mentioned Baltasar Kormákur we should quickly note his recent long-form TV show, Trapped (Ófærð) that concerns a dead body washing up in a remote Icelandic town that becomes snowed in and totally isolated. The elite murder squad from Reykjavik can’t reach the town and so the local cops have to solve the case. Technically the action occurs in stark and beautiful eastern Iceland rather than the capital but Trapped was Iceland’s most expensive TV show ever and deservedly won a ton of awards for its ten episodes of constantly tense atmosphere and tight plot.

What the detectives in Indriðason’s books and Trapped have in common is a certain Icelandic introspection and methodical nature. In this sense Icelandic noir with its minimalist aesthetic is clearly part of the wider phenomenon of Scandi-noir that’s dominated crime writing and the genre’s sales for some time now. What, if anything, distinguishes Icelandic writing from the Kurt Wallanders (Wallander), Sarah Lunds (The Killing) and Sara Nogens (The Bridge) of Scandinavia? Well, it’s hard to hide in somewhere as small as Iceland (332,000 people) and a capital city as compact as Reykjavik (about 124,000 people in the city itself) is by its very nature socially incestuous. Consequently witnesses always seem to know the suspects in Icelandic crime stories. There’s also a common theme of genetic disorders—an issue of more concern in Iceland, so long remote and attracting few incomers, than most places due to the small and close knit population.

Another theme is how Icelandic nationality has recently been put into question by the ending of the country’s isolation with the growth of mass tourism, and as immigration brings new Icelanders with different skin colors, traditions and religions. As well as this, local scandals such as the 2008-2011 Icelandic financial crisis that brought the country to its knees created a level of self doubt that hadn’t existed in the country since before the national prosperity that came with the Allied influx and their spending power in World War Two. Indriðason’s novels, and others, often indulge in a certain amount of national nostalgia, something that Jakob Stougaard-Nielsen (himself a Dane observing Iceland), the author of the study Scandinavian Crime Fiction (2017) thinks goes back to the very origins of the country’s crime writing traditions in the 1920s when Icelandic writers who had emigrated (mostly to other Nordic countries or across to Canada) began to write short detective stories.

Yrsa Sigurdardòttir has rivaled Indriðason for success with her Attorney Thóra Gudmundsdóttir series. The first, Last Rituals (2009), starts with a horrific murder in Reykjavik that seems to have been the result of a young student’s keen interest in ancient torture practices and witchcraft rituals in medieval Iceland (Vikings, folklore and traditional myths are another oft-recurring theme in Icelandic crime writing). Most of the Thóra Gudmundsdóttir series take place out of Reykjavik and in Iceland’s volcanic and rugged countryside. This is territory Sigurdardòttir knows like the back of her hand—as well as being a prolific crime writer she has a career as a civil engineer. Several years ago I met her at a literary festival and asked her what sort of engineering she specialized in. Geo-thermal, she replied. I was, of course, impressed, never having met a geo-thermal specialist before. However Yrsa dismissed my excitement telling me that just about every engineer in volcanic Iceland specializes in geo-thermal engineering!

Ragnar Jónasson (who teaches law at Reykjavik University by day) has found sales success with his Dark Iceland series featuring Detective Ari Thor. There are already six books in the series starting with Snowblind (2010). Ari is a rookie cop who has left his girlfriend in Reykjavik to be a cop in the remote fishing village of Siglufjörður. In a later book, Rupture (2012), Ari works with Ísrún, a news reporter in Reykjavik. Jónasson is a man steeped in crime—he’s a lawyer, best-selling crime writer and has also somehow found time to translate 14 Agatha Christie novels into Icelandic!

Árni Thórarinsson’s Season of the Witch (2012) is a great novel about a sophisticated Reykjavik journalist posted to the remote north of the country. He finds the contrast between bustling Reykjavik and the northern village of Akureyri maddeningly dull, until a murder occurs. Small-town intrigues and feuds turn out to be as hard fought and deadly as big city scandals.

And we have to mention Quentin Bates, a Brit who has set several crime novels in modern-day Reykjavik featuring Sergeant Gunnhildur Gisladotti of the city police. Moving to the capital from a sleepy village she encounters the nasty realities of the drugs trade, political corruption and violent murder. The series starts with Frozen Assets (2011) and now runs through to the fifth Gunnhildur book, Thin Ice (2016). Bates moved to Reykjavik for his university gap year in the 1970s—married, learnt the language, got to know the city inside out and became (what the English crime reviewer and massive Scandi-noir fan Barry Forshaw dubbed) an official “Scandi-Brit.” No lesser than Yrsa Sigurdardòttir has praised Bates’s books for their Icelandic feel.

Reykjavik crime writing can feel like a family affair sometimes. Most authors know each other and the vast majority—even if they sell well in Iceland—have to keep their day jobs. The amount of Icelandic crime writing making it into English is slowly increasing (Germany actually translates more, and there’s a healthy inter-Nordic translation market so the Scandi-noirists can read each other), but many writers have to rely on their tiny home-language market. For now perhaps Reykjavik is not as familiar to crime readers as Stockholm, Copenhagen or Oslo but the sizeable pool of talent in Iceland is increasingly breaking through the language barrier and getting translation deals. Expect to visit Reykjavik more often, at least on the page, in future.

Leonardo Padura on a Lost Generation of Cubans, and the Arrogance of Trump 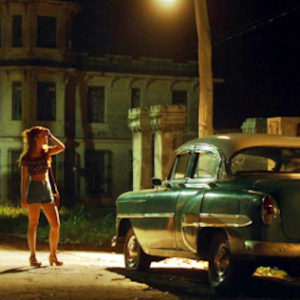 Leonardo Padura on a Lost Generation of Cubans, and the Arrogance of Trump

At this point, it’s fair to wonder whether relations between the US and Cuba will ever really be “normal.” Only a hundred...
© LitHub
Back to top