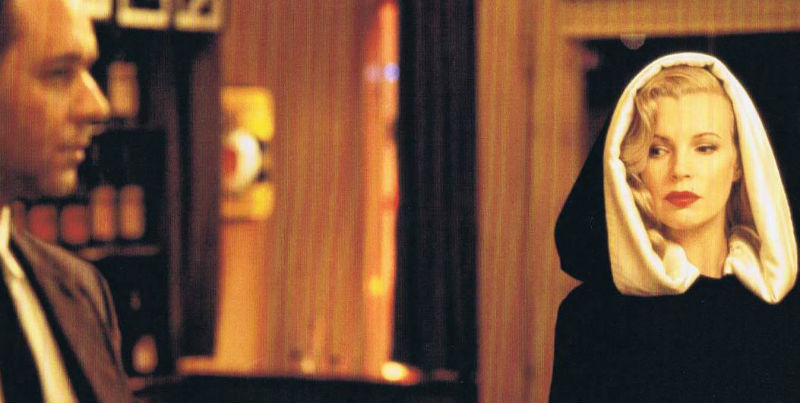 Holiday Movies for the Family...Maybe Not the Whole Family.

I love holiday movies, and for me nothing’s finer than sitting around with family watching It’s a Wonderful Life or The Holiday for the twentieth time, but occasionally you find yourself in the mood for something that gets the blood pumping just a little bit more than Zuzu with her flower petals or Jude Law doing Mr. Napkin Head. Every now and again, your wine is mulled, your warm socks are on, the fireplace is crackling and you want to watch Robert Redford unravel a government conspiracy. That’s where the Christmas thriller comes in. What’s better than watching some heart-pounding, spine-chilling mystery unfold as a guy in livery rings a silver bell and a kids’ choir sings the heart right out of “The Holly and the Ivy”? Luckily, you have options. You probably know already that Die Hard and Lethal Weapon take place during the holidays, but did you know there’s a whole world of other fantastic thrillers that feature Christmas pretty prominently? Whether you like car chases, surveillance coverups, or psycho-sexual odysseys into the belly of the American class system, there’s a Christmas Thriller for you and your loved ones to enjoy this holiday season.

There’s just nothing like the holiday season in New York. The storefronts are decorated, the lights are up, silver bells ring in the street, and when you step out to the lunch counter to pick up a few sandwiches, wet units come in to take out your entire office and all your coworkers. In this classic, Robert Redford plays a bookish CIA man caught up in the middle of an explosive revelation / coverup job that sends him on the run, using only his knowledge of mystery novels to elude capture and certain death. In the wind, he comes across Faye Dunaway, doing a little last minute shopping before heading out of town for a ski trip with her boyfriend, and together they pretty much outfox all the intelligence agencies of the western world. Meanwhile, in the background, again and again, choirs are singing, “God Rest Ye Merry Gentlemen” to make sure you never forget it’s Christmas. 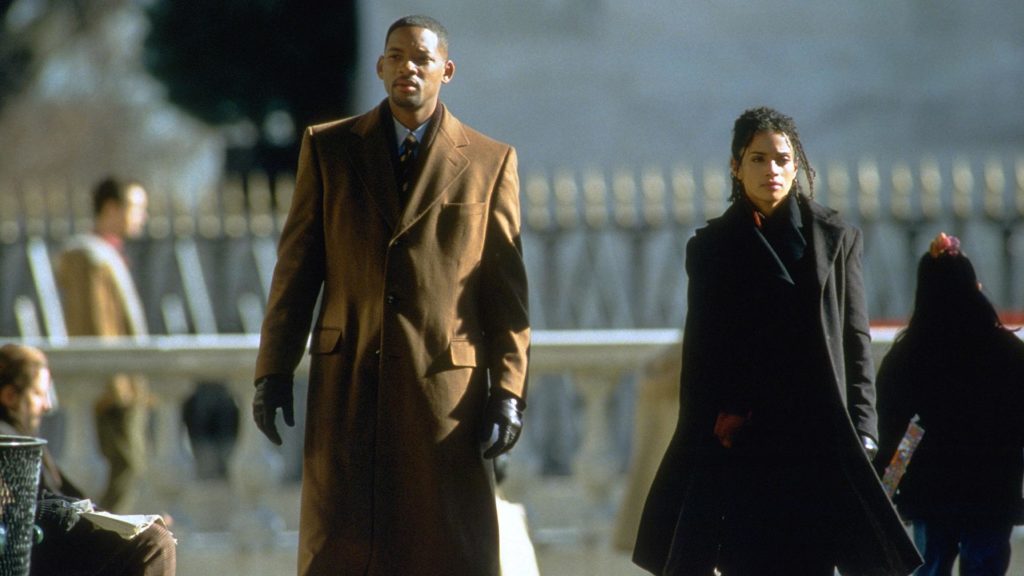 It’s appropriate enough that Tony Scott and Jerry Bruckheimer’s homage to the 70s conspiracy thriller took place during Christmas, like its progenitor, Three Days of the Condor. Will Smith plays Robert Clayton Dean, a labor lawyer who’s just trying to spend some rare down time shopping for lingerie for his wife, when he bumps into an old college friend who desperately plants highly-sensitive material on his person, setting off this individual-against-the-agency chase film. In fact, Christmas presents play a crucial role in this one, again and again, as the pivotal package, some very incriminating video taken by a wildlife researcher, gets mistaken for Christmas presents and lost in the shuffle of the holiday season. Also, Dean’s Georgetown home is just lovely and decorated for the season. 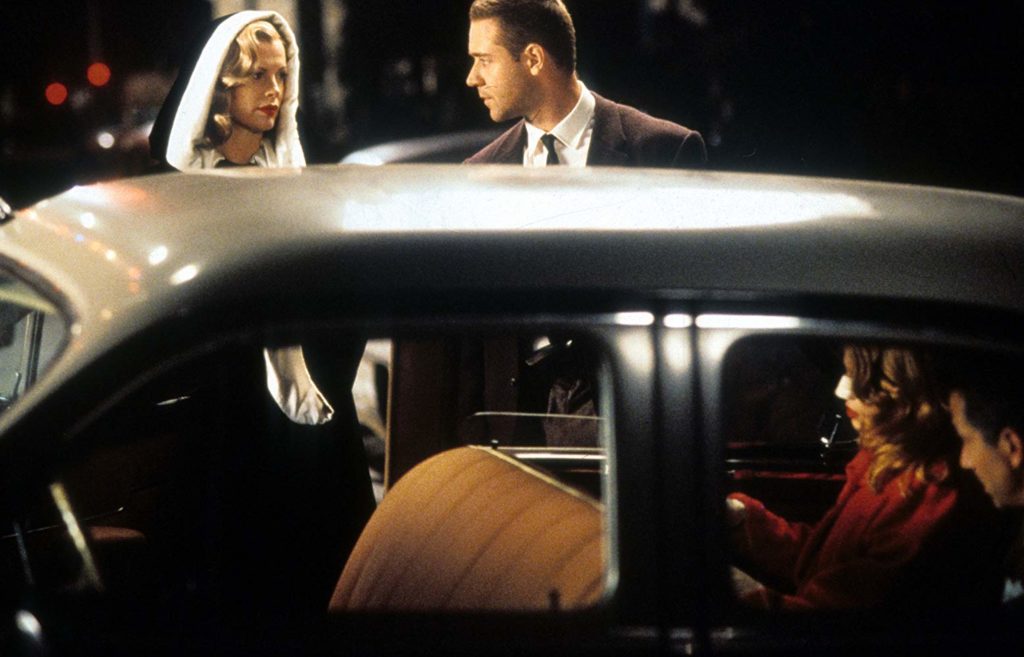 The first time Officer Bud White lays eyes on Lynn Bracken, the Veronica Lake dopelganger played by Kim Basinger, he’s picking up a case of booze for the precinct Christmas party, the same party where a slew of drunken cops go downstairs to beat the hell out of the detainees they blame for a cop shooting. It’s known as the “Bloody Christmas” disaster, and it makes the career of one ambitious young cop named Preston Exley (Guy Pearce) and destroys a few others. By the time the Nite Owl murders come around, the holidays are in the rear view, but the festive season lingers as a sinister turning point in this neo-noir classic adapted from the Ellroy novel. 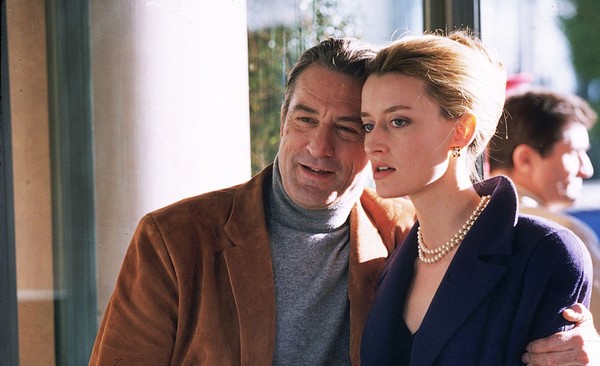 This late 90s action thriller is mostly remembered for the car chases, the buddy chemistry between Robert De Niro and Jean Reno, and the incandescent performance by Natascha McElhone (okay you probably don’t remember that part primarily but I do). Recall, if you will, this is also a Christmas-time-in-France movie, just like Home Alone is, kind of. A group of elite special ops mercenaries are brought together to snatch an undisclosed package on behalf of shady militant types, likely an IRA splinter group. Then all hell breaks loose, Stellan Skarsgård takes a sinister turn, and next thing you know a bunch of very quaint Christmas choirs are in mortal danger as cars, guns, and explosives go charging through the villages of southern France. Also, there’s some samurai mumbo-jumbo espoused as a life philosophy for a bunch of crafty hired guns. But mostly there’s De Niro, Reno, McElhone, Skarsgård, and Christmas. 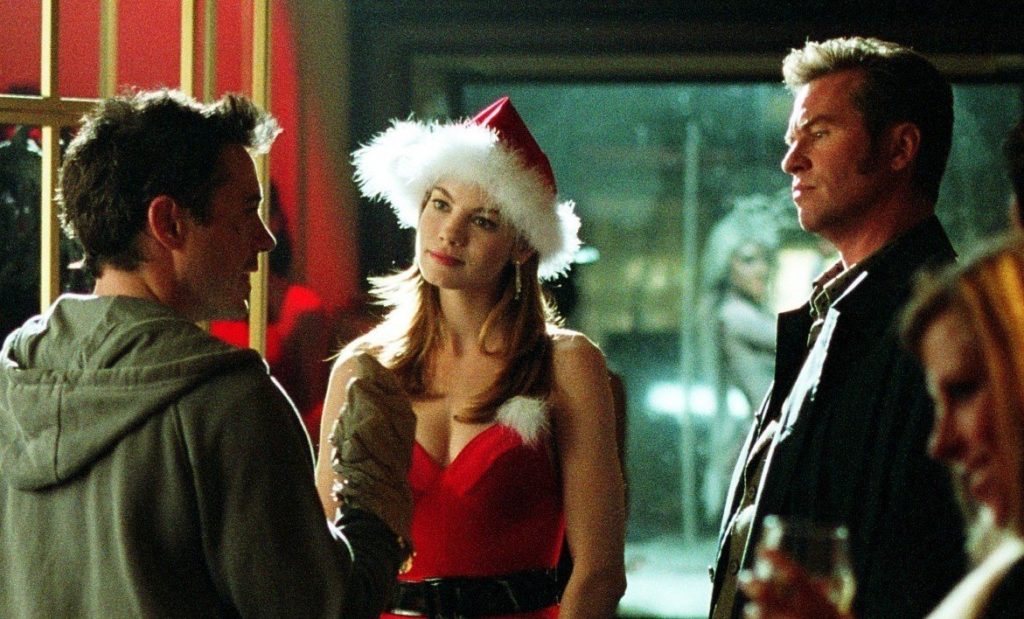 If you’ve seen this Shane Black crime flick you probably didn’t forget that it took place during Christmas, since that seedy Christmas-in-L.A. vibe is stamped all over this one, plus Robert Downey, Jr.’s NYC thief opens the movie robbing a toy store looking for a present for his niece, but it’s still worth revisiting every year come the holidays. Val Kilmer and Monaghan take turns stealing scenes throughout this one (the sexual politics are not aging well—let’s keep that in mind—still the two are dynamite in their parts), as this Chandler homage gets increasingly madcap and borderline nonsensical as the scenes progress. Come for the holiday setting; stay for the patter. 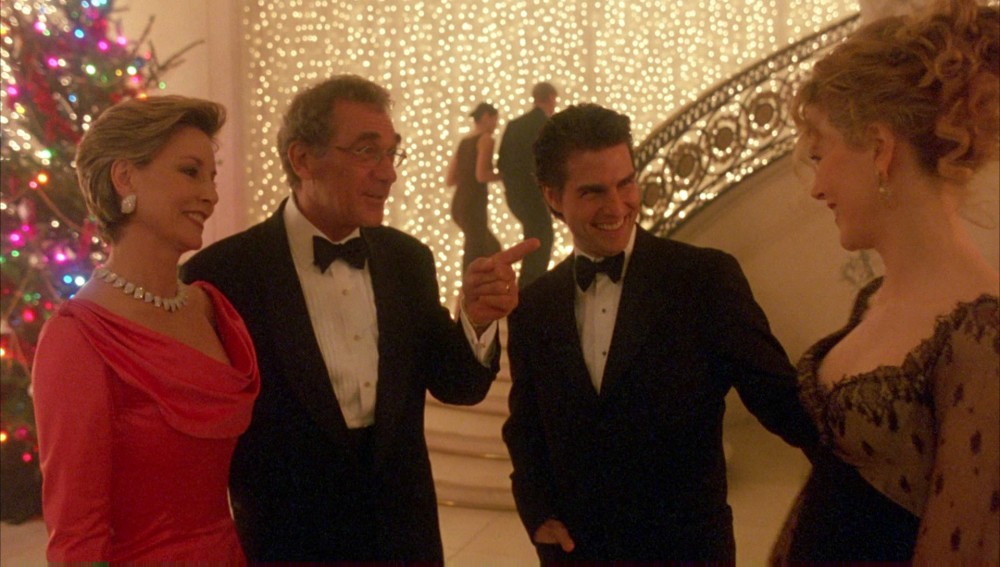 Sure, it might be a stretch to call Stanley Kubrick’s brooding 1999 meditation on a marriage a “thriller,” but if you’re into amateur sleuths, high society mysteries, and long walks down the dark streets of New York City, you might very well find this one as thrilling as I do. (Also, that piano music…chilling.{) The whole thing kicks off with Dr. Bill Harford and his wife, Alice Harford, attending an annual Christmas ball, where all the usual holiday stuff happens—an intense flirtation with a Hungarian count, an overdose in a breakout room, and a confidential chat afterwards between husband-and-wife, where they disclose their deepest, darkest secrets. Once Dr. Bill goes mobile, Kubrick revels in all the holiday kitsch of 90s Greenwich village, with the sleazy lounge acts, the garish light displays, and cold street walkers working the corners. Maybe your family usually sits around the hearth and watches It’s a Wonderful Life every Christmas. But consider throwing a curve ball at them this year and introducing them to the world of Kubrick’s Eyes Wide Shut as a new holiday tradition. 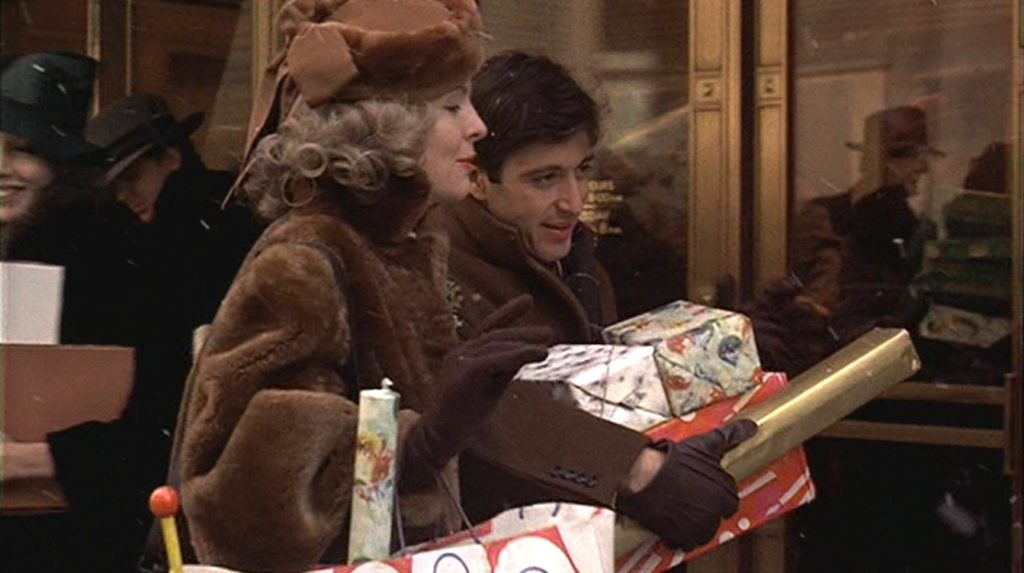 Okay, sure this is more of an epic and can’t be said to “take place” during any one time of year, but the holiday scenes sure are memorable, whether it’s Michael and Kay out Christmas shopping in New York when they find out that somebody has tried to assassinate Michael’s father, the big man himself, Vito, or the haunting notes of “Have Yourself a Merry Little Christmas” playing as a bulletproof vest is secured in place. Plus The Godfather remains one of America’s most commonly watched movies at year’s end, probably because cable loves to eat up that airtime with the trilogy (or the first two at least), and anyway it’s all about family, isn’t it? 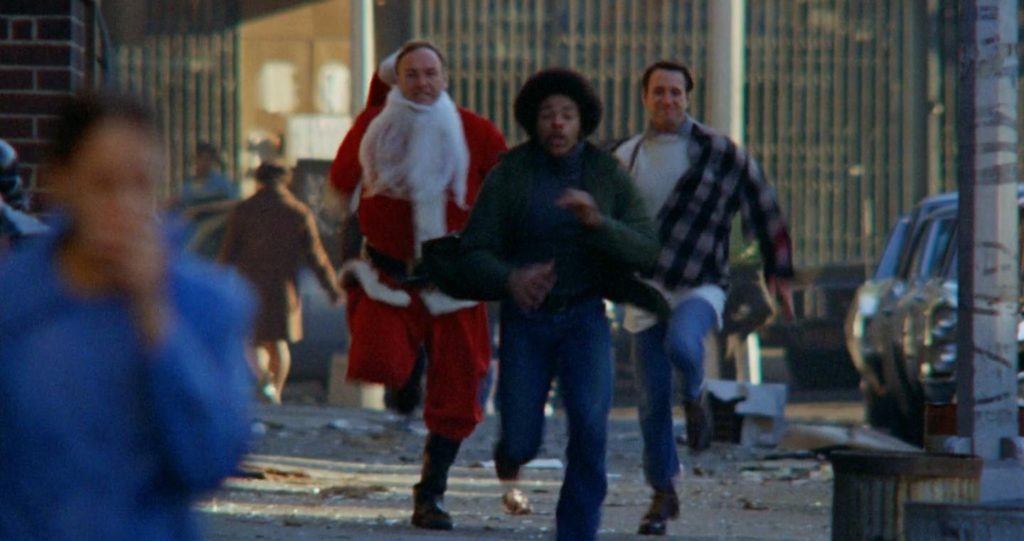 Who could forget Popeye Doyle in that Santa suit? The film opens with its Christmas bona fides: “Merry Christmas,” Popeye says, then pretty quickly after launches into a high-speed foot pursuit through the streets, back alleys, and dive bars of Brooklyn. Pretty soon he’s going from street level busts up the chain, following the middle traffickers across New York as they do their department store holiday shopping, meanwhile the kilos of dope are pouring in through the city’s ports. It’s everything you want in a Christmas movie: foot chases, car chases, Frenchmen, weird musical interludes, more car chases, and Popeye in that iconic porkpie. 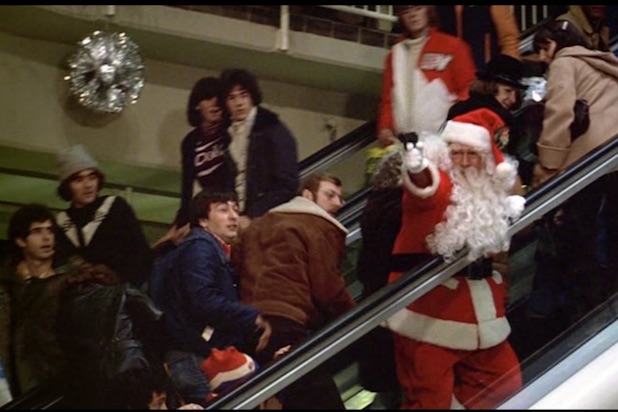 You might not be familiar with this one but you should be. Elliot Gould and Christopher Plummer star as a bank teller and a bank robber, respectively, who get tangled in an intricate and really pretty strange series of con jobs, setups, and thefts, all revolving around Christmas. In fact, when we meet the pair Plummer is dressed up as kind of a sleazy mall Santa in the middle of a bank heist. All that and you get a really interesting jazz score by none other than the legend, Oscar Peterson. It’s basically a cooler version of Charlie Brown’s Christmas. 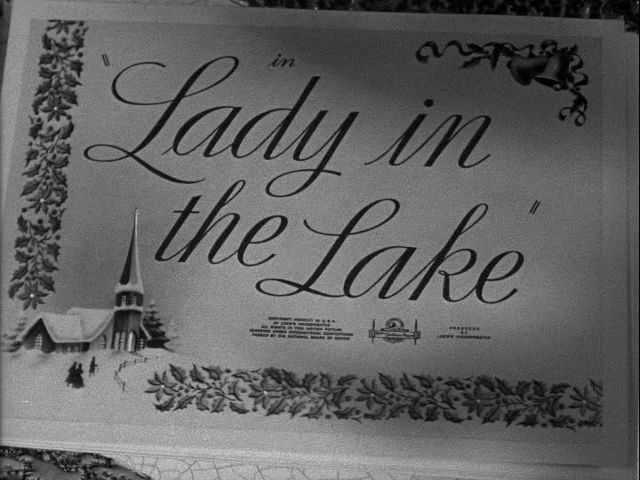 From the opening holiday-themed credits, you’d be excused for thinking this is a Frank Capra movie, but no, this is all Raymond Chandler, slightly less heralded than some of the splashier adaptations, but still a Philip Marlowe investigation and well worth the watching, especially for the innovative first-person perspective employed by director Robert Montgomery. Also, the choral soundtrack is pretty haunting, not to mention all those bizarre Christmas decorations lying all over the place as Marlowe goes in search of a missing person / murderer.

I just love this scene so much. There’s just nothing quite so good as the British Secret Service getting together at the holidays to do some heavy drinking, heavy petting, and a rousing rendition of “The Second Best Secret Agent in the Whole Wide World.” 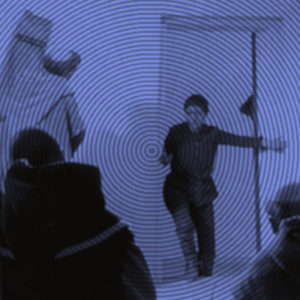 Lo stands, an antidepressant clutched in a shaking hand, in front of the stone-faced captain of the cruise ship she’s stuck...
© LitHub
Back to top