12 Books You Should Read in September

September is regularly one of the best months on the crime reader’s calendar, and this year does nothing to disappoint. That’s why we’re going with twelve recommendations for the month, rather than the usual ten. Below you’ll find exciting debuts and brand new thrillers from some of the most accomplished and widely read authors in the game. Check back throughout the month for more on these and other great books coming down the pipeline. 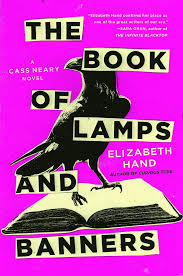 The Book of Lamps and Banners, by Elizabeth Hand
(Mulholland)

Hand is experiencing a well-deserved surge of popularity in the States, and readers who are new to her work are in for a treat, as she returns to a favorite character, the photographer Cass Neary. After Neary returns home to a stolen camera and few options for making ends meet, she  inserts herself into the purchase of one of the world’s most sought after books, an illuminated manuscript supposedly rescued from the library at Alexandria. When the book goes missing, Cass and her ex go on the trail, navigating a shady world of antiquarian books and the obsessives who chase after the books’ legendary wisdom. Hand is one of the most talented storytellers at work today, and The Book of Lamps and Banners is a strange, subversive tale that puts her talents on full display. (Dwyer Murphy, CrimeReads Editor-in-Chief)

These Violent Delights takes us into the twisted relationship by two college students, in what feels to me like Rope if it was set in the late 1960s and was influenced by nihilistic disappointment in the horrors of the mid-20th century rather than Nietzschean thrills. When two teenage boys, Paul and Julian, meet in an ethics class, they are drawn together immediately, sharing a passion for justice (and soon for each other).

The book’s narrator, Paul, is the artistic working class son of a Holocaust survivor father who kills himself before the novel begins; he’s raw, angry, self-loathing, and full of the potential for violence, and he thinks of Julian as a god whom he’ll never be worthy of, and can never quite fully believe. He hunts butterflies for his collection, because it’s the only way he can keep a thing of such beauty for himself. Only Julian sees him for exactly who he is, but lucky for Paul, Julian much prefers who he is on the inside to the shy, unassuming boy Paul presents to the rest of the world. Julian is the son of a man so dedicated to assimilation that he registers the family as Episcopalian and taunts a visiting Paul by sprinkling every dish with bacon. His French shiksa wife is equally as status hungry, and just as needlessly cool.

They would each do anything for the other—except stop trying to gain the upper hand. Each endures slight after slight from the uncaring world around them, until they can endure no more. Brilliant, multi-layered, and with the most fascinating interplay of deed, morality, and symbolism I’ve come across since Watchmen. (Molly Odintz, CrimeReads Senior Editor) 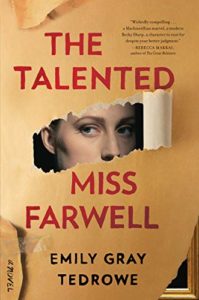 Becky Farwell has always been good with numbers—but it isn’t until she develops an obsession with collecting art that she begins shuffling them around to take from the town she works for and give to herself. She keeps promising herself that she just needs to amass a collection worth enough and then she’ll sell and get the town out of the hole, but instead she just keeps screwing her town over more and more. It’s sharp, darkly comedic, and full of fascinating facts about the art world. (MO) 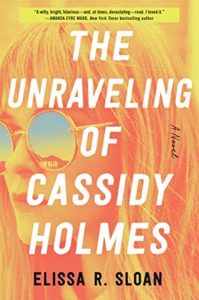 The Unravelling of Cassidy Holmes, by Elissa R. Sloan

As a forever fan of the Spice Girls, I devoured this take on early aughts fame, set during the height of the girl group craze. When Cassidy Holmes gets to the finals of a televised singing competition, only to lose as runner-up, she’s devastated, but an offer to become the fourth member of a girl group soon reverses her fortune. The four members of Gloss are talented, intelligent, beautiful—and completely out of their element. Their managers dress them in skintight bodysuits, the media christens each with a nickname guaranteed to evoke lewd and racist imagery (a la Spice Girls), and professional boundaries are violated in large and small ways as the so-called price of fame. A decade and a half later, Cassidy Holmes is dead, and the other members of Gloss are determined to find out what killed her. (MO) 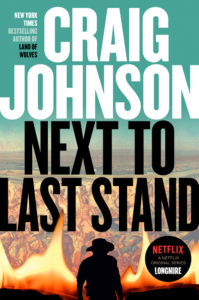 Next to Last Stand, by Craig Johnson
(Viking)

Leave it to Craig Johnson to unite the art heist thriller and the western in his latest Longmire novel. In Next to Last Stand, Walt is called into the Wyoming Home for Soldiers & Sailors to assist in a case that links together a shoebox full of money, a dead veteran, and Custer’s Last Stand, a famed painting supposedly lost in 1946, and since turned into a cottage industry of reproductions with a major beer company at the helm. Following Walt through a world of paintings and western rogues is a disorienting, highly enjoyable odyssey, and readers are lucky Johnson is willing to take some risks and keep his popular series innovative and fresh. Devoted Longmire fans and new readers alike will relish this one. (DM)

Rachel Howzell Hall introduces a new PI heroine up against a formidable first case in her latest. Grayson Sykes is hired to track down a missing dog, kidnapped by the owner’s former girlfriend, Isabel Lincoln. The longer Sykes is on the trail of her elusive subject, the less she understands her—until she suddenly understands all too well. Meanwhile, Sykes gets to overcome some of her own personal challenges in ways that should lead easily into more volumes in the series. (MO) 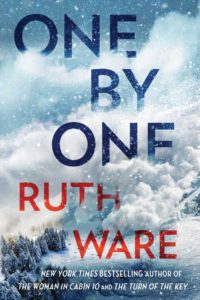 One by One, by Ruth Ware
(Gallery Scout)

Ware has quickly earned herself a place atop the psychological thriller world in recent years, and One by One, which brings in elements of traditional mystery, is an exciting new addition to her body of work. A London tech company organizes a corporate retreat in the French Alps, complete with team-building exercises and all the powerpoint presentations a person can stand. The surroundings are luxurious, but a storm and an avalanche ratchet up the tensions, as does the possibility of a company buyout. When one of the co-workers goes missing on the mountain, the stakes are raised that much more, as colleagues and uneasy friends begin to turn on one another. Read this one now and it’s a safe bet there’ll be a very scenic adaptation for you to watch in the near future. (DM) 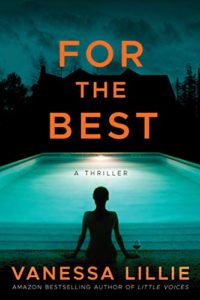 For the Best, by Vanessa Lillie
(Thomas & Mercer)

For The Best, Vanessa Lillie’s timely and unsettling tale of white privilege, is fascinating. A woman gets into a fight with a colleague at a work event, and becomes a suspect in his murder when the body is discovered the next day. She was drinking heavily—so heavily she can’t remember. But perhaps there’s something she needs to forget. And perhaps her racist father knows something. I loved this study in the ways in which white privilege and entitlement become lethal. (MO)

When No One Is Watching, by Alyssa Cole
(William Morrow)

Alyssa Cole’s When No One is Watching isn’t just a great thriller—it also got me out of my initial month-long Covid reading funk. Cole’s gritty narrator is already struggling to deal with creditors, her mother’s illness, and the fallout of a bad relationship, but the rapid gentrification of her Harlem neighborhood is making everything worse. The real estate agents are increasingly pushy, the new white neighbors will do anything in the name of their own security, and longtime residents of the neighborhood are vanishing overnight at an alarming rate. As the protagonist finds out (in glorious, pulpy fashion) there’s a lot more going on to the changes in the neighborhood than just a few housing sales. (MO) 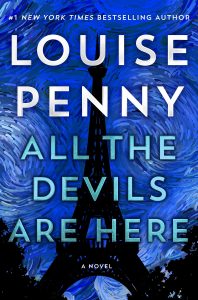 All the Devils Are Here, by Louise Penny
(Minotaur)

The Gamaches have decamped to Paris on holiday in Penny’s latest, but of course, they won’t get to enjoy their vacation for long; Armand’s billionaire godfather is attacked in what is no random act of violence, and the Inspector must dig deep into the secrets of the past in order to protect his loved ones from any further harm. (MO) 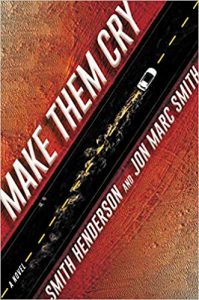 Henderson’s first novel, Fourth of July Creek, was one of the most powerful debuts in recent memory. His follow-up, co-authored with Jon Marc Smith, is sure to have thriller readers feeling very encouraged, as he turns to a high-octane world of drug violence, dangerous borders, and government conspiracies. Make Them Cry is reminiscent of the best 1970s thrillers, but its secrets are of the moment, as a former prosecutor turned DEA agent gets wind of a cartel secret and heads to Mexico City to investigate. This is chiseled, adrenaline-fueled thriller writing at the highest level. (DM) 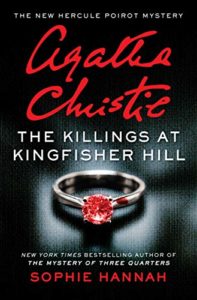 The Killings at Kingfisher Hill, by Sophie Hannah
(William Morrow)

Among the many posthumously-continued mystery series, is any in better hands than Poirot is in Sophie Hannah’s. The poet and crime scribe has managed to keep the spirit of Agatha Christie’s novels alive while always introducing new touches and flourishes to keep readers guessing and delighted. In her latest, Poirot is summoned to the proverbial country estate, traveling by luxury train where a fellow passenger’s mysterious fears of being murdered, later confirmed, may have a link to the case Poirot has been asked to address: the possible vindication of a woman soon to be hanged for murder. Insidious motivations and secret pasts converge in high Christie fashion, as the puzzle plays out in highly satisfying fashion. (DM) 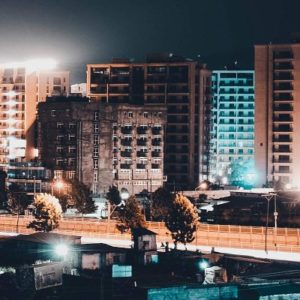 The faint bedroom light spilled across the floor and slumped against the window. I stood with my ear plastered to the wall,...
© LitHub
Back to top