Alex Segura's Guide to the Classic Books of Miami Noir

Our books have many mothers and fathers. The novels that inspire us to put pen to paper on our own work tend to linger. I’ve talked a good game about the private investigators that drove me to create my own Miami PI Pete Fernandez. Characters like Laura Lippman’s Tess Monaghan, George Pelecanos’s Nick Stefanos, Dennis Lehane’s Patrick Kenzie and Angie Gennaro, Lawrence Block’s Matt Scudder, to name a few. These books gave me a crash course in modern, flawed and human protagonists, and I knew, even before Pete Fernandez showed up in my brain, hungover and cranky, that I wanted something close to that. I wanted to tell crime stories that not only crackled with twisty plot, but told the story of real people—missteps and victories and everything in between. I also wanted to tell crime stories that were soaked in setting, where the place was almost as important as the people. It’s an ingredient of the best PI fiction, in my view—Marlowe’s Los Angeles, Tess’s Baltimore and Moe Prager’s Coney Island come to mind immediately, but there’s a lengthy list of private eyes that are inexorably tied to a specific city or place.

So, in the hubris of youth, as I immersed myself in the works of these writers, I thought, “Hell, I should write a Pi novel. But it has to be in Miami. There aren’t any books like this set in Miami.”

I, of course, was wrong. It happens a lot when you’re younger. While my take on Miami is different from that of other crime novelists and very much based on my own life there—as you can see for yourself in Blackout, the just-release fourth novel in the Pete series—it wasn’t created in a vacuum. And while the novels included below—the best Miami crime novels in my humble opinion—all vary in scope, tone, prose and lots more, they all share a unified take on Miami: as a conflicted, beautiful but dangerous stretch that manages to be a bit of all things: neon-soaked tourist destination, underbelly of crime and corruption, hotbed of off-the-wall characters and, most importantly, immediately compelling. Few places are as noir as Miami. The stark contrast of the intense Florida sunlight and the back-room dealings that a good Miami crime novel can evoke speak to me in ways the smoke-filled alleys and concrete jungle of New York never will. It’s home, and I love books that can, for a moment, pull me back to those familiar, sun-drenched streets. 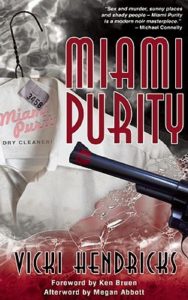 Hands down, the purest, most evocative piece of Miami noir ever. An ode to James M. Cain’s The Postman Always Rings Twice with a dollop of crackling sexuality to boot, Miami Purity doesn’t wallow in the tourist-y trappings of Miami some might expect, instead giving you a harsh dose of reality from the perspective of sexy, sharp and conflicted laundromat employee Sherri Parlay. You can easily get lost in Hendricks’s delectable wordplay, even as you’re ensnared by a story so soaked in noir it hurts. 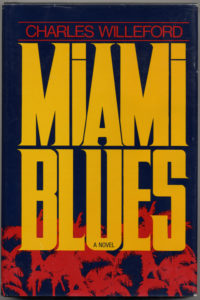 Crime fiction fans are no stranger to Willeford’s expansive (and impressive) body of work—but, for my money, the gem of the collection is his Hoke Mosely series, which starts with the aptly titled Miami Blues. Willeford spotlights Miami at a moment of great change—as the infusion of Cubans from the Mariel boatlift intersected with the burgeoning and terrifying international drug trade, presenting it through the prism of embittered but still good-spirited Miami homicide detective Hoke Moseley. The perfect mix of proto-#FloridaMan wackiness and seething, hardboiled crime fiction, Willeford’s series gives readers a tour through Miami’s weirdest corners and introduces them to some of the city’s quirkiest—and most menacing—characters. 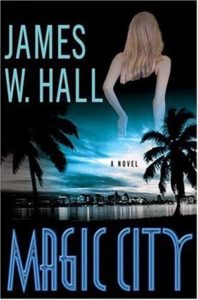 If, like me, you tend to read your crime series in order, let me suggest you do this here with the first novel in the series, Under Cover of Daylight, because it will be very much worth your time. Hall’s Thorn novels, chronicling the Florida misadventures of his Florida Keys-based private investigator, bring a literary and poetic sensibility to Florida crimes most sinister. While I love the entire series, and Thorn as character, Hall’s Magic City stands out as one of the best, mixing historical fiction, true crime and Thorn’s own conflicted worldview to create a novel that feels both epic in scope and very, very human. 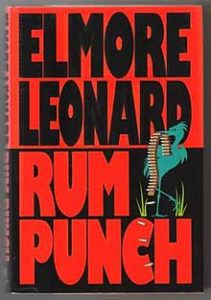 These next two are a bit of a cheat, in that they don’t happen in Miami, per se, but do evoke a strong Florida crime sensibility that’s influenced dozens of writers. Elmore Leonard needs no introduction. His westerns and Detroit-set crime novels are required reading. But something interesting happened along the way for Leonard, and his evolution from hardboiled Detroit street poet to chronicler of Florida Weird is a sight to see. The basis for Tarantino’s Jackie Brown, Rum Punch features the best elements of Leonard’s Florida novels—impeccable, free-flowing dialogue, shady dealing and more memorable characters than you could ever hope for. If I’m ever asked to suggest one Leonard novel to a new reader, this is the one I choose. But do read them all. You’ll be better for it. 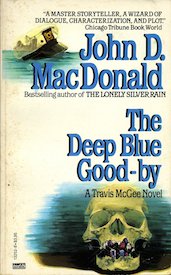 Like Rum Punch, John D’s first Travis McGee adventure isn’t a Miami novel, per se, but it is Miami-adjacent, and is so hugely essential to any Miami or South Florida reading list, I’d be remiss if I didn’t mention it. A tainted knight in the mold of Marlowe and other classic PIs, McGee will find whatever you’re looking for, as long as he gets half the value once the job is done. As far as crime novels go, few are as influential as The Deep Blue Good-By, and for good reason. MacDonald crafts a masterful, hardboiled novel that introduces one of the most beloved protagonists ever in McGee. A beach bum with a heart, McGee finds himself reeled in by a country girl looking to get revenge on a devious ex-boyfriend. But like most of McGee’s later adventures, our hero finds that his latest case is much more than it seems. Be warned: once you read this one, you’ll burn through the rest of the McGee books at a good clip. 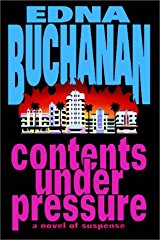 You can’t talk about Buchanan without mentioning her seminal work of true crime, The Corpse Had a Familiar Face, which recapped her decades on the crime beat as a reporter for the Miami Herald. Buchanan’s transition to fiction is seamless, and her protagonist, Britt Montero, shares many characteristics with her creator—namely, she’s a reporter for a major Miami newspaper and just as obsessed with her job as Buchanan was with hers. Buchanan’s knowledge of not only the city’s landscape but the feel of its criminal underworld help make her debut snappy and genuine. 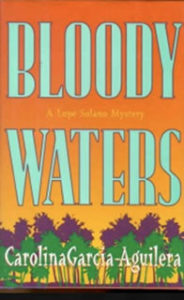 Garcia-Aguilera’s Lupe Solano books were eye-opening to me as a young reader of crime fiction. Here was someone like me, a Cuban-American as the hero. With Lupe, Garcia-Aguilera balances the tropes and expectations of the PI genre with an injection of new wrinkles, mostly stemming from Lupe’s background and experience. Bloody Waters makes for a great debut to an often-overlooked series that served as a major influence on me and Pete. 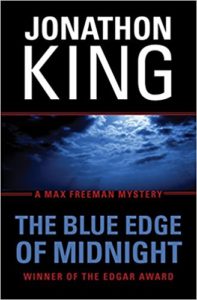 Like Buchanan, Hiaasen, and myself, King has a South Florida journalism pedigree—spending years as a columnist for the Sun Sentinel before diving into writing full time. His first Max Freeman mystery finds the ex-cop hiding in the darkest corners of the Florida Everglades, reeling from an incident he can’t shake from his time on the Philly police force. When he stumbles over a murdered child, he finds himself pulled back into the life he’d tried to forget. Unflinching, moody and somber, King’s debut does a masterful job of contrasting the natural beauty of Miami and Florida with the dark deeds committed by the criminals who live there. 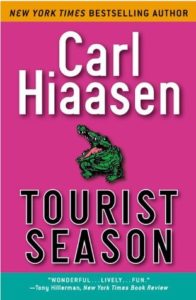 If you have even a passing interest in Florida crime fiction, you’ve probably read a few Carl Hiaasen books. The longtime Miami Herald columnist transitioned seamlessly into writing fiction, using his keen eye for people and the humid, tropical landscape of Miami to create a boatload of darkly funny mystery novels. I’m partial to Hiaasen’s first, Tourist Season, because it retains some of that first novel grit that writers tend to lose as they become more polished in their prose and plotting. It doesn’t all hang together as well as later books, but that’s part of the fun. An affordable and memorable trip to Florida awaits you if you pick this book up. Just make sure you have a can of mace to accompany your sunscreen. 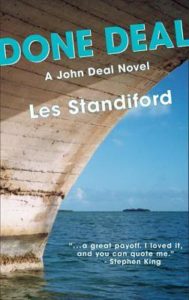 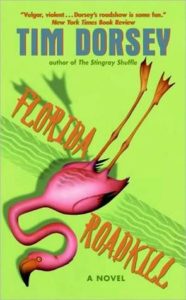 You can’t have a list of Miami crime novels and not mention Tim Dorsey. Though he doesn’t write about Miami routinely, his contribution to Florida crime fiction is massive—thanks in no small part to his colorful characters, off-the-wall situations and sizzling plots. His first Serge Storms novel is a great place to start, but it won’t be your last Dorsey joint. 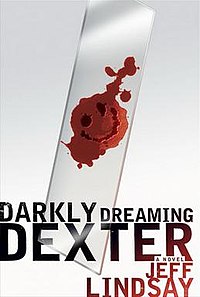 The book that inspired the hit television series hits readers like an over-sugared shot of Cuban coffee, with a premise that probably lead a few writers to slap their foreheads in jealousy for not thinking of it first. Incognito serial killer Dexter Morgan makes for a surprisingly likable protagonist and Lindsay’s light and breezy stylings produce a fun novel that leans more toward Miami Vice than Miami Purity, but that’s not bad. 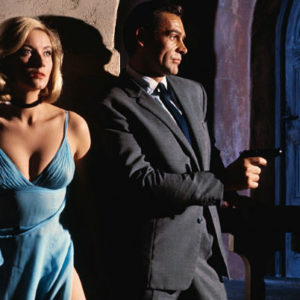