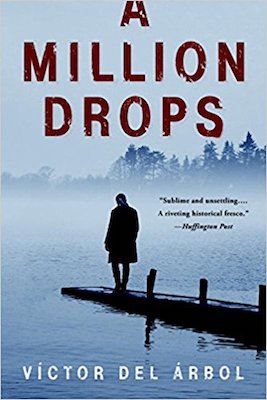 The following is an exclusive excerpt from A Million Drops, by Victor del Árbol, a wide-ranging international espionage thriller that dives into the complex political landscape of Spain and Russia in the 1930s and 40s, and explores the legacy of mid-century upheaval in the present day.

The landscape took on a certain density after the rain, the colors of the forest seeming deeper. The windshield wipers were still beating back and forth, though less desperately than an hour earlier, as they were leaving Barcelona. Ahead lay the mountains, which now, as night began to fall, were nothing but a dark mass off in the distance. The young man drove carefully, paying attention to the road, which narrowed as it wound higher, curve after curve. The cement mile markers along the edge of the road didn’t seem like particularly good protection against the cliff that dropped off steeply to their right. From time to time he glanced in the rearview mirror and asked the boy if he was queasy. The kid, half asleep, shook his head, but his face was pale and he kept his forehead pressed to the window.

“Not long now,” the young man said to make him feel better.

“I hope he doesn’t puke; this upholstery is new.”

Zinoviev’s hoarse voice brought the driver’s attention back to the road.

Zinoviev shrugged, extended his enormous hand, tattooed with a spider much like the one covering half his face, and lit a cigarette with the dashboard lighter.

“Well, the upholstery’s only three years old, and I’m still paying it off.”

The young man’s eyes darted quickly to the cell phone on the tray. He’d taken the precaution of silencing it, but it was too close to Zinoviev. If the screen lit up, he’d see.

The main road led to a dirt one, overlooking a valley surrounded by trees. People called it “the lake” although in fact it was a small dam, which supplied power to an electric plant built in the forties. In the summertime, the area filled with tourists eager to spend a day in nature. Over the years, they’d made it easier to get to, built a little slate-roofed hotel with stone façade, a playground with swings, and a café. But in October the forest ranger’s cabin closed for the season, there were no day-trippers to serve at the prefab unit with the Coca-Cola ad, and the plastic chairs stacked at the cafeteria’s barred doors were a snapshot of sadness.

The young man stopped the car so close to the shore that the front tires almost kissed the water. He turned off the engine. On the north side of the lake was a fenced-off area filled with heavy machinery and a few billboards put up by the Ministry of Public Works. They were going to drain the reservoir in order to build a luxury development. The drawings advertised semidetached homes with private swimming pools flanking a huge golf course. They’d already begun to clear the area and cone off the surrounding forest; tree trunks were piled chaotically around stacks of rebar, concrete, and mounds of sand. Nothing could be heard but the howling wind rocking the firs along the shore and the intermittent banging of one of the hotel’s shutters, which hadn’t been battened down properly. Rain fell on the lake, dissolving in gentle waves. It all seemed surreal.

Rain fell on the lake, dissolving in gentle waves. It all seemed surreal.

Zinoviev opened the door. When the young man tried to do the same, he stopped him.

“It’s better if I go with you. The boy only trusts me.”

Zinoviev opened the back door and asked the boy to get out. He tried to be nice, but this sort of thing didn’t come naturally to the Russian, whose voice and tattooed face were already frightening enough. The boy began to cry.

He watched Zinoviev take the boy’s hand and begin walking toward the gray water of the lake. The boy turned back to the car, and the young man waved confidently. Through the flicking of the wipers he could discern the wooden boardwalk and gazebo. It was almost entirely dark. Disobeying Zinoviev’s order, he got out and approached. Dry leaves crunched beneath his feet and soon the wet ground penetrated the soles of his shoes. When he reached the gazebo he saw Zinoviev’s broad muscular back, his hands in his pockets and a spiral of bluish smoke swirling over his shoulder.

The Russian turned slowly and gave him a look. “I told you to wait in the car.”

“We don’t have to do this, there’s got to be another way.”

Zinoviev took the cigarette from his mouth and blew on the tip.

“It’s already done,” he said, starting back to the car.

The young man walked to the edge of the lake, its calm waters glimmering like brass. Come, the darkness beckoned, Come, forget about it all.

The boy was floating facedown like a starfish, and rain blurred his body, which slowly began to sink.

Eight months later, Zinoviev was concentrating on his breathing. He liked to go for a run in the mornings, eight or ten kilometers at a decent pace, listening to music on his headphones for motivation. This morning it was Tchaikovsky’s Nutcracker. As he ran, jumbled thoughts cluttered his mind, things impossible to articulate in exact sentences. He was thinking of all the men he could have been, if he wasn’t who he was.

Spiders were to blame for everything. Zinoviev’s biggest fear had its roots in the basement of his childhood home—a cold cellar, full of spiderwebs. Small spiders, tiny really, colonized the darkness by the thousands. He could feel them crawling all over his legs, his arms, his neck, into his mouth. Attempting to wriggle away from them was useless; they were everywhere, touching his skin with legs like hairy fingers, trying to ensnare him in their sticky silk traps. Had it not been for that cellar, he’d probably be another man today. He’d learned to conquer his fear, to turn it into a strength. His spider tattoos were a declaration of intent: Whatever doesn’t kill you makes you stronger.

The last stretch of his run was the hardest. As soon as he could see the house through the fog, he clenched his teeth and picked up the pace. Behind the fence he heard the familiar gruff bark of Lionel, his Doberman.

“Not bad, not bad at all,” he said to himself, trying to catch his breath as he checked his GPS watch. His heart rate began to slow. Opening the front gate, he gave Lionel a friendly kick. The Doberman was still limping—an American Stafford had almost ripped off his hindquarters in the last fight. Zinoviev stroked the dog’s square head, his powerful jaws. He should get rid of it. What the hell was the point of a fighting dog that could no longer fight? But he was fond of him.

“What do you say, warrior? Any visitors today?”

He walked to the porch and sat on the front step, rummaging in his belt pouch for his cigarettes. He loved smoking, even right after a run, before his heartbeat had fully recovered. The tobacco hit his lungs like an avalanche. Wiping his face on the sleeve of his sweatshirt, he exhaled a mouthful of smoke. Renting this house had been a good idea. Isolated, quiet, a portrait of bucolic countryside. Surrounded by dense pines, it was almost invisible, even from the top of the hill. If anyone got lost and approached the gate, Lionel dissuaded them from doing anything but carrying on their way. And if that wasn’t enough, there was always the Glock he kept hidden behind the TV.

Zinoviev took off his muddy running shoes and walked across the creaky wood floors. The fireplace was lit and its heat quickly warmed his damp socks. He turned on the TV and smiled, seeing the cartoon channel. He was using Disney cartoons to learn English, but the truth was he really liked that big mouse. Every time he saw Mickey, he wondered at the fact that he had once been eight years old. That was a long time ago. Too long. He looked away from the plasma screen and went into the kitchen to make a protein shake, still listening to the television.

Suddenly, over the sound of the TV, he heard the dog growling. Retracing his steps, Zinoviev looked out. He’d forgotten to close the front door. The dog growled, hackles raised, paws pressed into the floor, staring at the fence. Zinoviev inhaled sharply.

The first shot shattered the dog’s chest, and the animal jerked up into the air with a throaty whimper and then landed heavily on his side. A powerful shot, a sawed-off shotgun, almost point-blank. Zinoviev ran for the TV to grab his Glock. He didn’t see Mickey hand Minnie a bouquet of roses. Snatching his gun, he turned. Had he not hesitated, Zinoviev would have had time to take aim. But for a fraction of a second he stood still, mouth open in shock.

All he received in exchange was a cold stare, a look that left no doubt as to the man’s intentions. Before Zinoviev had time to react, the butt of the shotgun slammed into his forehead.

How many ways are there to end a man’s life? As many as he can imagine. And the worst of them were passing through Zinoviev’s mind when he opened his eyes to find himself with a wool hood pulled tight over his face. The fabric cut into his mouth, suffocating him. The hood stank of sweat. He was naked and had been handcuffed in an unnatural position, to some sort of post or beam. His arms and shoulders were killing him, supporting the weight of his entire body, his feet barely brushing the ground. Hanging there like a sausage, he felt his muscle fibers tearing, felt the metal handcuffs cutting through the flesh of his wrists.

How many ways are there to end a man’s life? As many as he can imagine.

“You shouldn’t have killed him. He was a harmless little kid.”

The voice, coming from behind Zinoviev’s head, made him tense up, as though an invisible rod had been rammed through his spine. He began to sweat and tremble. The worst can always get worse. He shivered as something cold and sharp grazed his back. A knife.

“How many people have you injected with your poison? Do you paralyze them first so they can’t move while you do horrible things to them?”

Control yourself. Get a grip. He’s only trying to scare you. Zinoviev was clinging to this idea, but the first slash of the machete disabused him of such a thought. It was quick, between the ribs. He clenched his teeth. Don’t scream. It’s only pain.

“The innocent don’t fear monsters, did you know that? Children aren’t afraid of evil.”

Zinoviev felt the machete’s blade being drawn from his clavicle down to his nipple.

“I’d like this to last awhile. So do me a favor and don’t die right away.”

Zinoviev knew, now, that his death was going to be atrocious, like returning to the cellar of his childhood with all of those spiders waiting for him. Millions of them.

He withstood as much as possible. But in the end, he let out a shriek that no one heard.

From A Million Drops. Used with the permission of the publisher, Other Press. Copyright © 2018 by Victor del Árbol, translated by Lisa Dillman. 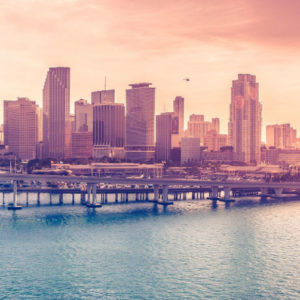 12 Essential Miami Crime Novels Our books have many mothers and fathers. The novels that inspire us to put pen to paper on our own work tend to linger. I’ve...
© LitHub
Back to top