Fifty years ago, Milano Calibro 9, or Calibre 9 as it was released in the United States, hit Italian cinema screens. A small time mafia foot soldier, Ugo Piazzo (Gastone Moschin, a famous Italian comic actor at the time), leaves prison only to be caught up in a conspiracy around the disappearance three years earlier of $300,000 from a Milanese crime boss known as the Americano. Believing that Ugo took the money and stashed it while he was in jail, the Americano sends Rocco (German Italian actor Mario Adorf), a clownish but lethal mob enforcer, to retrieve it. Ugo denies he had anything to do with the missing cash, but no one, including the police and his ambitious stripper girlfriend (Barbara Bouchet), will believe him. Calibre 9 is an excellent entry point to examine the Italian crime film phenomena known as the poliziotteschi, well over a hundred of which appeared from the late 1960s to 1980. It also serves to focus some overdue attention one of the lesser-known but more interesting of the many poliziotteschi directors, Fernando Di Leo. 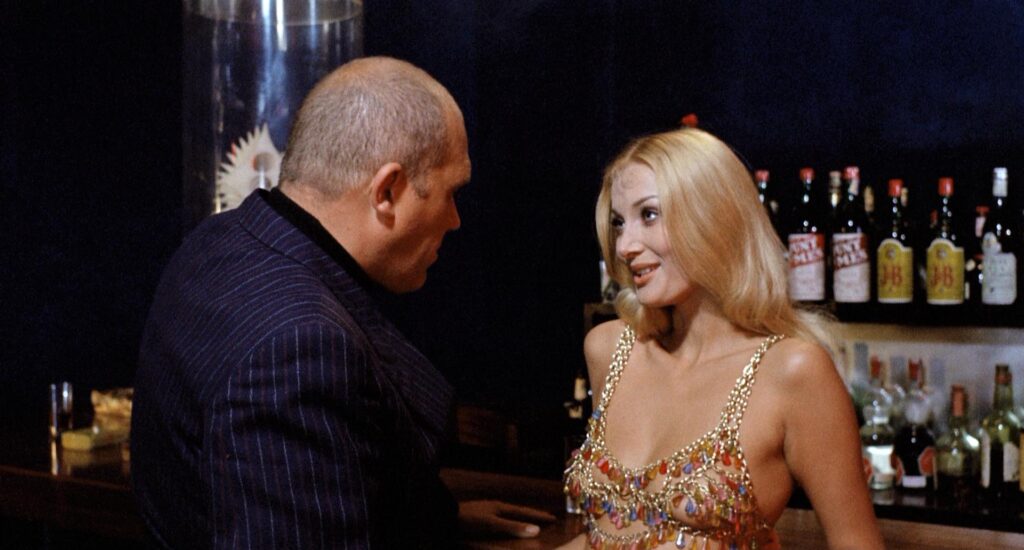 The poliziotteschi was significantly influenced by the international box office success of American crime movies such as Bullitt (1968), Dirty Harry and The French Connection (1971), The Godfather (1972), and Michael Winner’s 1974 vigilante movie Death Wish. Poliziotteschi are characterised by fast paced action and graphic, often quite brutal on-screen violence, including at times sexual violence. As well as their European stars, the films also functioned as vehicles for American and British male stars whose big screen careers were on the slide in their home countries at the time. Henry Silva, Woody Strode, John Saxon, Richard Conti, Lee Van Cleef, Jack Palance, Telly Savalas, Yul Brunner, Edward G Robinson, James Mason and Joseph Cotton all appeared in poliziotteschi films.

In addition to American crime cinema, the poliziotteschi were profoundly influenced by and reflected the political, economic and social turmoil that swept Italy from the late 1960s to the early 1980s. This period, referred to as Italy’s anni di piombo or ‘Years of Lead’, is generally acknowledged to have started with the December 1969 bombing of Milan’s Piazza Fontana, in which 17 people were killed and 88 injured. Initially blamed on left wing militants, suspicion for the act rapidly shifted to a paramilitary neo fascist organisation known as the New Order. A lengthy investigation and numerous court trials never managed to pinpoint definitive responsibility for the bombing, in a large part due to the obstruction by right wing forces within the Italian government and intelligence services. The case kicked off a decade of political violence between right- and left-wing militants, culminating in the kidnapping and killing of prominent Christian Democrat statesman and former prime minister Aldo Moro by the Red Brigades in 1978.

In his 2019 book Blood in the Streets: Histories of Violence in Italian Crime Cinema, Austin Fisher contends that the poliziotteschi cycle actually comprised several distinct sub-genres of Italian crime film: the police procedural; the mafia story, the vigilante film; a strand that incorporates strong elements of the Italian giallo horror cinema also popular at the time; and, among the most interesting of the poliziotteschi films, the conspiracy thriller, usually focusing on attempts to unmask official culpability for large scale corruption, crime and acts of right-wing violence and terror. Calibre 9 forms part of a loose trilogy, along with The Italian Connection (1972), and The Boss (1973). All three films straddle multiple aspects of categories put forward by Fisher. They are mafia films and, in Calibre 9’s case, at least, incorporate a police procedural element. In addition, all three films showcase the changing nature of organised crime and the dissolution, that began in the 1970s, of the Italian working class as a strong political force, as well as the right/left conflict that engulfed Italy at the time.

Adorf appears in The Italian Connection as a pimp called Luca Canali who gets blamed for the disappearance of a shipment of heroin en route from Milan to New York. Two hit men, David (Silva) and Frank (Strode), are dispatched to kill Canali, but he proves far more cunning than anyone gives him credit for. The Boss begins with the massacre of a group of gangsters in a porn theatre by a hit man (Silva again, manifesting an Italian version of Donald Westlake’s Parker character) using rocket-propelled grenades, at the request of rival gangster Don Giueseppe, who wants to eliminate his competition. In revenge, one of the relatives of the murdered mobsters kidnaps Don Giueseppe’s heroin addicted, hipster daughter. Giueseppe’s boss, Don Corrasco (played with venal charm by Conte), forbids Giueseppe to pay the ransom requested for his daughter lest it make their organisation appear weak.

The career of Di Leo, who directed these and other poliziottesch films, spanned the years 1964 to 1985. He started out doing screenplays for spaghetti Westerns and worked with Sergio Leone to turn Akira Kurosawa’s Yojimbo (1961) into the 1964 classic, A Fistful of Dollars, as well as working on the script of For a Few Dollars More (1965). He dabbled in soft-core porn and giallo before moving into the crime genre. He was adept at delivering the mix of fast paced thrills, bare-knuckle violence and graphic sex that characterised the poliziotteschi. To a cracking progressive rock soundtrack, the first five minutes of Calibre 9 involve a rapid series of scenes in which money changes hands several times, only for it to go missing at some point, the intended criminal recipients ending up with blank slips of paper. The criminals, headed up by Adorf, violently retrace the series of exchanges back, executing the final two couriers with dynamite in a cave on the outskirts of Milan. Di Leo was inspired by the success of The French Connection and the work of French noir director Jean-Pierre Melville, particularly the 1967 hit man film, The Samurai. He also had a deep immersion in American film noir, dumped in Italy in a large quantity after World War Two.

Di Leo’s films evince an overt noir sensibility that is unusual in many of the Italian crime films of the period, blended with references to the political debates that divided Italian society in the early 1970s. Cops have conversations about how organised crime can’t survive without the connivance of bankers and businessmen. In response to a junior colleague’s complaint in Calibre 9 that the police should be out chasing anarchists rather than wasting their time on mobsters, his superior retorts, “Everyone is an anarchist to you since those students beat you up.” Di Leo’s films also contain a sharp examination of the changing power structure of the Mafia. He portrays organised crime not as a principled organisation dedicated to family and a strict criminal code, but as an anonymous, bureaucratic business entity. When Ugo gets out of the jail in Calibre 9, he is surprised to find the mob now has offices in a skyscraper. In addition to portraying high-level crime and corruption, Di Leo’s work focuses on the foot soldiers of organised crime, men who grease the wheels of the larger mafia organisation and who are devoured by their bosses the moment they are of no use. 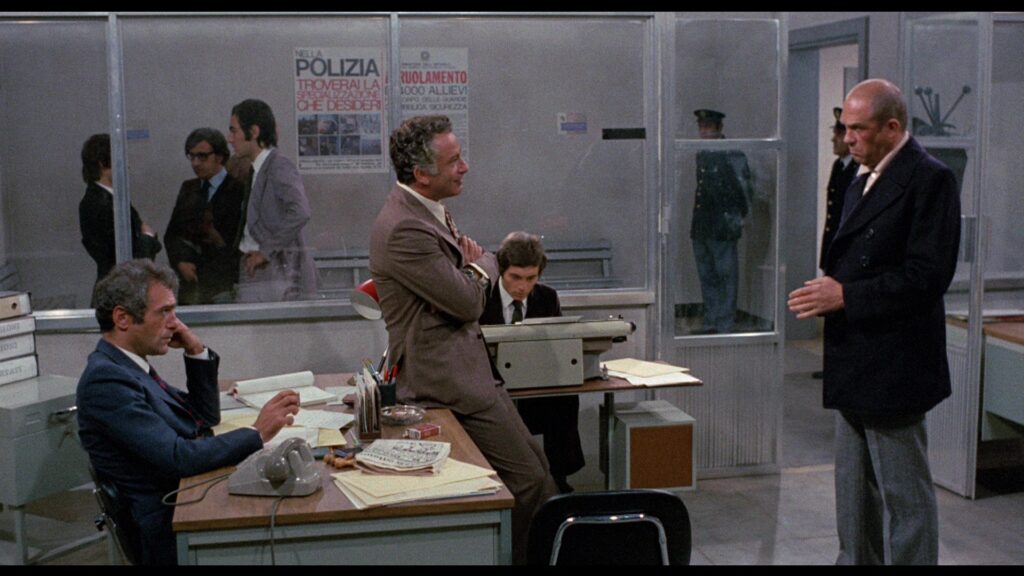 The main character in another Di Leo film, Shoot First, Die Later (1974), Lieutenant Domenico (Luc Merenda, a Poliziotteschi regular,) is a tough, celebrity cop with a beautiful art gallery owning girlfriend and a proud old school father who works as a low-level policeman in the suburbs of Milan. Behind the public image, Domenico is in the pay of a venal Mafia boss, Pascal, and his lieutenant, Mazzati (another Conte performance). His worlds collide when an old man makes a complaint to his father about a car blocking the exit to his run-down house, including details of the car’s number plate. Unknown to the father and the old man, the information could be crucial in solving the murder of the son of a wealthy Swiss shipping magnate involved in drug trafficking, whose body has been found by a couple of local kids encased in concrete. Pascal directs Domenico to get the report from his father, which necessitates him admitting to his corrupt activities. The father reluctantly hands over the report to his son and, in disgust, disowns him. In response Domenico says: “How many times have you had to beat a poor guy to death to make your superiors happy? How many men have you convicted by inventing some phoney rotten story and how much corruption have you been involved in just to get yourself a lousy stinking present at Christmas time? But that kind of corruption isn’t bad, is it?”

Even though the report is retrieved, Pascal decides to make extra sure all loose ends are tied up and dispatches assassins to kill not only the old man, but Domenico’s father. Next they murder Domenico’s girlfriend and try and kill him with a bomb. Domenico survives and an innocent policeman is killed instead. After Domencio tracks down and dispatches Pascal’s hired killers, Mazzati offers him a deal: he will help Domenico kill Pascal, if the rogue cop agrees to shift his loyalty to him. Domenico kills the old mob boss, only to himself be shot dead by his police partner, who is also on the take. The circle of murder and corruption is complete.

Di Leo’s controversial take on Italian society got him into trouble with the authorities. He was denounced by a minister in the ruling government for having a character in The Boss read out the names of ten leading conservative Christian Democrats politicians implicated in anti-Mafia trials as the names of corpses in a mortuary. At a time when the Italian government was still in official denial about the Mafia’s existence, The Boss raised further ire by showing the Mafia collaborating with members of the Catholic clergy, and for Di Leo’s decision to film the Mafia boss’s car stops outside of the actual local headquarters of the Christian Democrat party in Palermo. The Milan police objected to Shoot First, Die Later being advertised in the city and, according to Di Leo, deluged him with complaints. 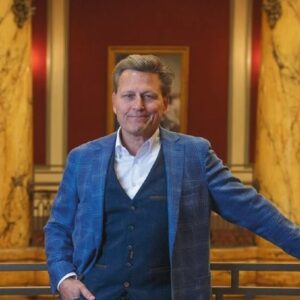 The cliché rings true. David Baldacci was an overnight success.  It just took him 15 years to get there. His first...
© LitHub
Back to top