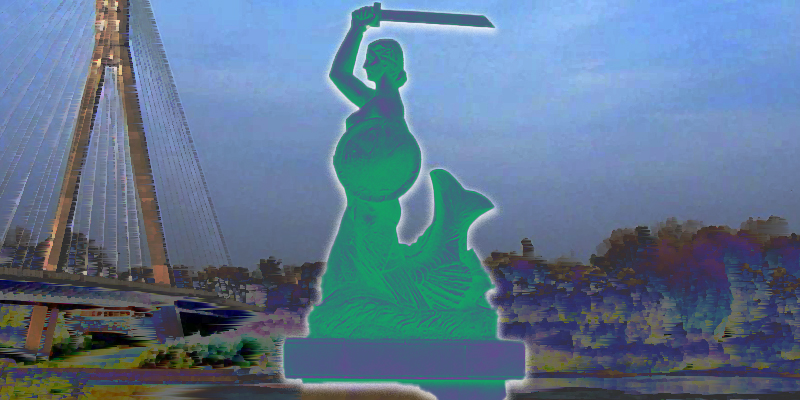 Readers will let you get away with just about any setup—as long as the world building makes sense.

Cozy mysteries are a popular genre. But there are many sub-genres that capture the attention of amateur sleuth-lovers. One of those niches is the magical cozy mystery, a strange mix of murder mystery mixed with fantasy, paranormal or supernatural elements.

I think my mystery series, the Enchanted Bay Mysteries, must on paper read like one of the most bizarre of the sub-genre. Mermaids. Murder. Mystery.

But I think (I hope) it works because I write the series as realistically as possible. Does that seem contradictory? It might but if you create the world of your series based on reality that just happens to have magic in it… maybe not.

For example, in A Hex For Danger, the main character Alex Sobieski is descended from the Mermaid Of Warsaw. That’s a real myth in Poland, and you can find her statue all over Warsaw. I ask the question: What if she was real? Got married. Had children. What would that look like in our world?

I surmise that through natural selection her descendants would’ve lost their ability to shapeshift from their Mer to human form, leaving them looking like every day folk but with a little mermaid DNA which gives them some extra-sensory abilities like telepathy, heightened sense of smell (which fish actually have), obviously the ability to swim long distances and stay under water for very long periods of time (even longer than a Navy Seal for example). And a few other abilities, like command of water, just for kicks and giggles.

And what would the town folk think about these women… that they were different? Special? Maybe… witches? Also a reasonable assumption, since historically women who seemed to be different from the other women were sometimes called witches. Politics or power play, that’s also realistic.

I would actually describe myself as a speculative writer who happens to be writing a cozy mystery at the moment. Science fiction… fantasy…. Sometimes there’s a very thin line between what is magic and what is just technology or an extra-sensory ability we can’t understand.

And that is how I approach the Enchanted Bay Mystery series. A world very much like our own in which some pretty spectacular things are possible. Magic or no? Who can say, it just depends on your orientation. But it’s fun, yes—to read stories set in worlds where anything is possible. Witches can cast spells, animals can talk, and mythological characters like mermaids, fairies, and leprechauns are a thing. And just in case you need a bit of edginess to tone down the sensational factor… there’s murder.

That’s what a magical cozy mystery is… at least to me.

And there are several magical cozy mysteries in particular that I think are excellent examples of the sub-genre. They span the gambit in the amount of magicality (is that a word?) that is shared in the story to subtle and barely there, to glitter-in-your-face obvious. And the tone can vary too in tone to lighthearted fun romp like Jennifer Chow’s Sassy Cat Mystery series to introspectively dark and complex, like Julia Buckley’s Hungarian Tea House Mystery series… and everything in between.

All you have to do is pick your literary poison. Here’s six of my favorites to get you started. 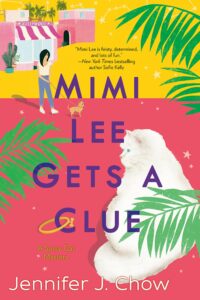 Mimi Lee Gets A Clue by Jennifer Chow

This is a series that surprised me. The gorgeous bright cover will lead you to believe this is a fun, fast-paced, light-hearted mystery set in Los Angeles and in the world of pet grooming. And you’d be right. But it also features a talking cat. A talking cat!

I’ve never read a cozy mystery with a talking animal and I wasn’t sure I could suspend my disbelief for a talking cat and really enjoy the mystery. (Because obviously a talking cat is so much more fantastical than women descended from mermaids. Lol) But the story is just a regular mystery and there’s a cat that talks. And there’s a scientific reason for it—so it makes sense. And isn’t that the thing with magical anything: that the world building makes sense to the reader?

And also, Jennifer gives the cat THE BEST LINES. I was actually laughing out loud as I read this story (and the rest of the series). And now, I love the cat.  And I love this series. 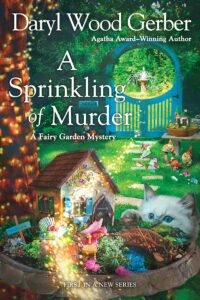 A Sprinkling of Murder by Daryl Wood Gerber

I honestly think a mystery series featuring fairies is even more out there than mermaids, but I’ll tell ya – I’m here for it. I love fairies and have been waiting for a writer to give them the cozy mystery treatment. There are fairies, fairy gardens, fairy houses, just miniature stuff and then regular people doing regular people stuff.

In the book, just like in real life, there are people who believe in fairies, and people who don’t believe.

I don’t think a cozy mystery featuring fairies is for everyone BUT if you believe or want to believe in magic THIS is an enjoyable read. 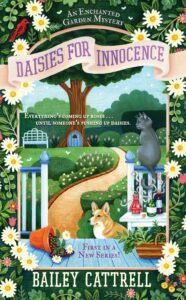 Daisies for Innocence by Bailey Cattrell

Some magical cozies are more magical than others. Baily Cattrell’s Enchanted Garden Mystery series is very subtle. There are beautiful flowers and herbs and women who seem to know things and magic things that happen. But nothing is overt, kind of like Hallmark’s The Good Witch series. It’s not in your face but it’s there if you’re looking for it.

As I read the series, I find myself leaning in wanting more magic. But magical restraint is also good.( I would also love more books in this series if anyone is listening. 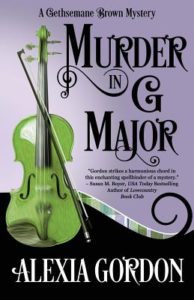 Much like talking cats, I didn’t start out a fan of ghosts in mysteries. But I am a big fan of mysteries featuring African-American sleuths, the Irish countryside and whiskey. So, I gave this series a chance and fell in love with a sexy Irish dead guy. It doesn’t MATTER that he’s not alive. He’s alive on the pages and in my heart—okay?

And I really want him and Gethsemane to get together. Logistically, I don’t know how that would work out BUT I love Alexia Gordon’s stories and the way she brings frequencies and music and smells as signs of paranormal activity. It’s science-y yet magical.

Much like mermaids and herbal apothecaries, on paper it doesn’t seem like a mystery about a classical musician from Virginia paired with an Irish ghost should work—but it works. Oh does it work!

This is a fantastic series. Think any BBC mystery, but with ghosts, and you get the idea. 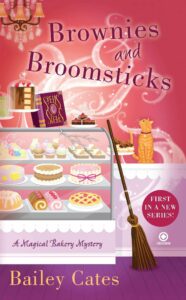 Brownies and Broomsticks by Bailey Cates

Okay, so this is a hardcore witch cozy. No dancing around the May pole here—there are women in this book who identify as witches, they have a coven and they cast spells. Bam. In your face. And if you’ve never read a witch cozy before you’ll be in for a surprise because this series is also about strong capable professional women who support each other and figure stuff out.

It’s also a culinary cozy mystery—so if you loved baked goods (that do things, i.e. magic) this is your series. 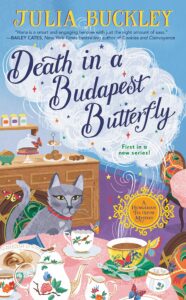 Death in a Budapest Butterfly by Julia Buckley

The Hungarian Tea Shop Mystery series reminds me of the Enchanted Bay Mystery series in that it shares a culture. My series features Polish culture and history, Julia Buckley’s?  Hungarian. Lots of food and language and culture—I love it!

So when I discovered that the main character in the story has psychic abilities and feelings about things and people I was SO surprised. I knew the grandmother read tea leaves but I didn’t read—pun intended—too much into that. I thought this was just a series about tea (which I love by the way).

But this series has paranormal elements, a bit light at first but the further you go into the series the more pronounced it becomes. And like the Enchanted Bay Mystery series which is heavy on mythology, the Hungarian Tea Shop Mysteries are full of Hungarian fairy tales.

I’ve listened to the audiobooks for all three books and the tone feels a little dark and atmospheric, which is very unique, and the main character is very introspective perhaps because she is psychic?

This paranormal cozy mystery has a special magic all on its own. 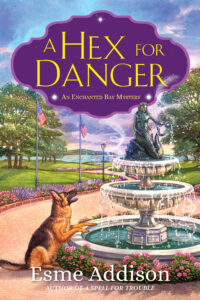 Ever since Esme discovered Nancy Drew, she's wanted to solve mysteries. As a mystery author, she's finally found a way to make that dream come true. A former military spouse, Esme lives in Raleigh, NC with her husband and three boys. When she's not writing, you can find her visiting B&Bs, breweries, wineries, and historical sites. Her novel, A Spell for Trouble, is now available from Crooked Lane Books.

Shop Talk: Jordan Harper Pulls Down the Blinds, Turns Up the Heat, and Writes Novels on Hotel Stationery 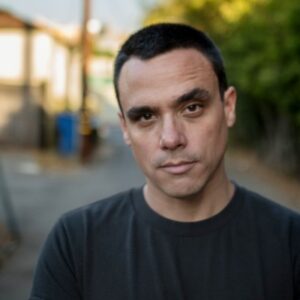 Shop Talk: Jordan Harper Pulls Down the Blinds, Turns Up the Heat, and Writes Novels on Hotel Stationery

I’ve been a fan of Jordan Harper’s ever since I first read She Rides Shotgun, his Edgar Award Winning debut novel published...
© LitHub
Back to top