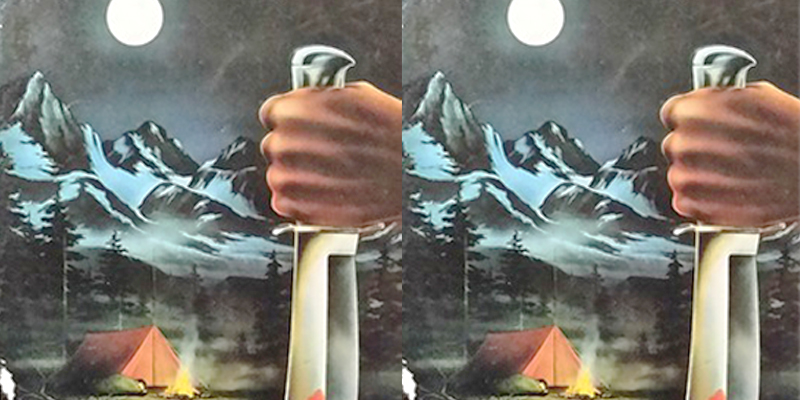 Grady Hendrix reads an unhealthy number of murder books. Here are some of the most absurd(ly entertaining).

Serial killers are super cool. They’re in every moody Scandinavian crime show and lurking on the pages of every single grimdark mystery novel, but only a few leave a lasting impression. I read an unhealthy number of murder books when I wrote The Final Girl Support Group and I want to take a moment to introduce you to some I can’t get out of my mind. 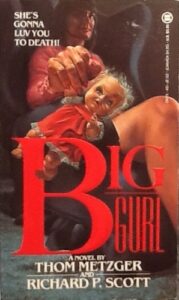 Years before Joyce Carol Oates and Bret Easton Ellis wowed readers with their big important literary novels, Zombie and American Psycho, told completely from a serial killer’s point-of-view, Metzger and Scott gave us Mary Cup, aka Big Gurl. We’re never quite sure how big Big Gurl is, but she’s so large that when she wants to murder someone she simply picks them up and carries them home, or she yells at them until they meekly follow her to their doom. Mary lives alone in an attic, protected by her social worker who’s in love with her, and she spends most of her days watching TV, licking blocks of frozen SPAM, and worshipping a mutilated baby doll name Vuvu who she sometimes has sex with. When people annoy her, she murders them, like Jerry Jeru the lounge singer at the Golden Gondola. When he won’t take her request that he play “Only the Broken Hearted Know What It’s Like to Cry Cry Cry All Night Long Cause They Lost Their True Loves and They’re Down and Out and in Their Beds Crying Burning Tears of Woe” she leads him back to her apartment, seals his mouth with electrical tape, and rubs baked beans into his chest before shooting whipped cream up his nose until he dies. As she says, “Big Gurl got to be happy every minute of every single day!” 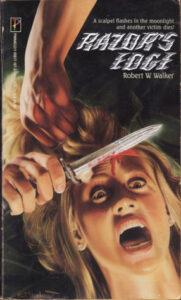 Robert Walker’s series of novels featuring Chicago medical examiner Dr. Dean Grant are like Patricia Cornwall’s Kay Scarpetta books except much, much weirder because you get the feeling Walker is just making up the details of forensic science as he goes along. Seconal, the barbituate, glows when it detects moisture, infrared light, used to show heat, reveals footprints, there’s something called a scintillation counter, and Bourbon is described as “a chemical.” Even weirder are the killers he confronts. My favorite are Van and Dean Hamel, of Orlando, Florida, also known as The Scalper Brothers. Van is a dwarf with long hair growing from every part of his body, including his earlobes. The only place he doesn’t have hair is on top of his head, and this is a big problem because Satan loves hair and he’ll never make Van a wizard until every inch of his body is hairy. Van forces his handsome brother, Dean, a police psychiatrist, to scalp victims for him so he can fashion human hair toupees, hoping that will fool Satan. When Dead resists, Van beats him with a bullwhip woven from human hair. 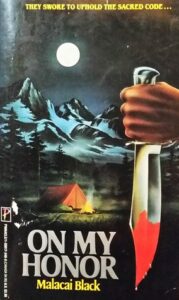 A pudgy, beer-bellied Scoutmaster in an Illinois suburb, at first you think you’ve got Schultz’s number when he spends lots of time “grooming” his 13 year old Boy Scouts, luring them into his tent late at night. The kids later complain of having gaps in their memory and find themselves standing outside Schultz’s tent at all hours not knowing how they got there. Then author Malacai Black pulls the rug out when he reveals that Schultz is not a meek purveyor of dental supplies but he’s actually a coolly efficient hitman who kills his targets in elaborately engineered accidents. And who are his minions? Hypnotized Boy Scouts. Yes, this is a book in which we’re treated to scenes of 11 and 12 year old boys with glassy eyes being hypnotized into pushing people in front of trains, crushing them with their own cars while they open garage doors, and chasing their moms around the house with knives. 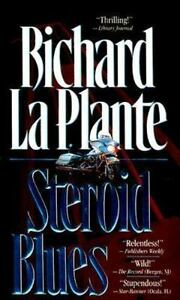 A meth-gobbling, steroid addicted bodybuilder living in a depressing Philadelphia home, Jack Dunne is a massive mountain of muscle, completely covered in hair (I’m sensing a theme). He likes to pump iron until his body hurts, then he calls random strangers and screams in a high-pitched falsetto, “Help me! Help me!” over and over again. He also has a wiener that’s always flopping out of his bodybuilding trunks and dangling halfway down to his knees. He likes dressing as his dead sister, Jacqueline, and punching people to death. Turns out he’s hunting the neo-Nazi, steroid-dealing powerlifters who got his sister addicted to steroids before murdering her. When he finds them it’s revealed that Jack Dunne is actually Jacqueline Dunne. Her steroid abuse turned her into a man and made her grow a penis. This is not medically possible. 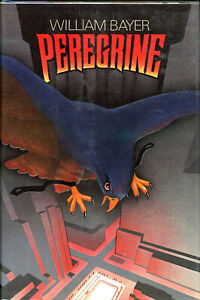 New York City cowers in terror beneath the talons of Hollander’s trained falcon who hunts his master’s prey: petite women, including ace local news achor, Pam. The NYPD are so desperate to stop this feathered fury they bring in the number one hunting falcon in the world, Kumataka of Japan! It’s bird on bird action that only ends when Hollander’s peregrine tears off Kumataka’s head. Hollander gets obsessed with Pam and decides he’ll turn her into a bird. This is not medically possible but serial killers don’t accept your limitations. Hollander abducts Pam and brain washes her into thinking she’s a falcon with the help of a feather cloak he makes her wear. I think he also makes her wear a beak? In the end, it turns out that Hollander wants to die by bird, so Pamela helpfully pecks him to death. 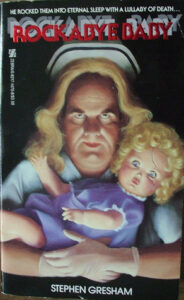 Maris Macready is not just a serial killer pedophile, he also pretends to be handicapped so he can get a discount at Shoney’s breakfast bar and use a free taxi service. Dressing as a nurse in an outfit he inherited from his sister, Maris prowls the Alabama woods, spying on little girls, asking to examine their glands, then strangling them. He loves comic books, hates Bruce Springsteen, and has an enormous collection of Garfield memorabilia. At one point, he tries to abduct a one-armed child while dressed as Garfield. Maris calls himself the Bloofer Lady, Sister, the Monster, and Tootsie but after getting beaten up by a small child he breaks into an elementary school classroom, writes “Nobody gets out of here alive” on the chalk board, and decides that he will become The Beautiful Phantom, an ethereal being who will transcend gender and allow him to live free of the chains of sexual identity. Later he gets shot. 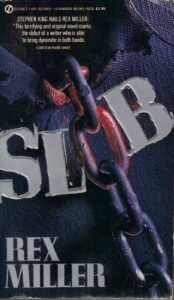 Rex Miller’s widely hyped Slob introduced readers to Daniel “Chaingang” Bunkowski, a 469-pound homeless man living in his car who prowled the Midwest, committing random sex murders. Bunkowski began as a junk food addicted monstrosity who put away 40 egg rolls at a time and whose breath smelled like “stale burritos, wild onions and garlic, bad tuna, and your basic terminal halitosis.” However, as Miller wrote more Chaingang novels, he made his killer the product of a Vietnam-era black ops program to breed the perfect killer and told repeatedly reminded readers he was “an autodidact with a genius intellect.” He had a photographic memory, the ability to detect the presence of human life in a house, he understood fluid mechanics and possessed “the natural skills of a consummate actor.” He knew how to make “a smart bomb activated by an ordinary kitchen food timer. A device for starting an undetectable fire.” He was immune to poison ivy. By the time he reached the last book, Chaingang had developed the ability to turn invisible in darkness by regulating his respiration and heart rate like a ninja and had adopted five adorable puppies who lived in the pockets of his overalls.

Grady Hendrix’s new book, The Final Girl Support Group, is out July 13 and available now for pre-order. There’s more dumb junk like this over at his website, gradyhendrix.com 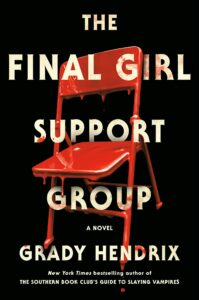 Grady Hendrix is a writer and journalist and one of the founders of the New York Asian Film Festival. A former film critic for the New York Sun, Grady has written for Slate, the Village Voice, Time Out New York, Playboy, and Variety. His latest novel, The Southern Book Club's Guide to Slaying Vampires, is now available from Quirk Books.

Which Psychological Thrillers Should You Read This Month? 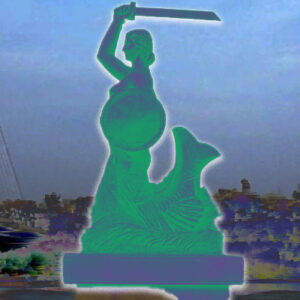 Cozy mysteries are a popular genre. But there are many sub-genres that capture the attention of amateur sleuth-lovers. One of those...
© LitHub
Back to top