Can cinema capture the heroic efforts of investigative journalists?

There was a time when the church and the government were the arbiters of moral authority. But since those institutions have often proved corrupt (and, at times, both corrupt and criminal), another institution has often filled the void—the free press. Investigative reporters, bolstered by the first amendment, are often the last resort for individual citizens seeking the truth. They follow the breadcrumbs of information, burrow into the dark recesses of corporations or government agencies, and expose secrets hidden by those in power.

In my debut novel, Truth and Other Lies, I explore the moral imperative journalists have to expose treachery both here and abroad. So it’s no surprise many of my favorite movies deal with the importance an independent press plays in a functioning democracy. Here are nine films which examine that role, ranging from reporters who expose corporate malfeasance to child sexual abuse, human rights violations, even criminal acts originating at the highest level of our government.

Jeremy Renner is Gary Webb, the Sacramento journalist who not only exposed the racism behind this country’s crack epidemic but implicated the CIA in funneling profits from those drug sales to the Contra rebels in Nicaragua in the 1980s. At first lauded by his peers, he’s later the target of government pushback amid falsified accusations of sloppy fact-checking and fabricating sources. 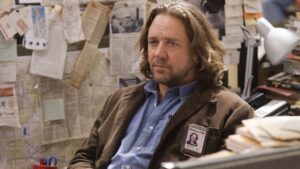 Russell Crowe portrays a no-nonsense newspaper reporter teamed with blogger Rachel McAdams to cover a story involving Congressman Ben Affleck, private security contractor Point Corp. and the possible murder of a young aide. One of the first films to pit online media against the traditional printed word with Helen Mirren (as the editor) caught up in pressure from the new corporate owners to sell papers any way they can. This is a spot-on portrayal of how newsrooms operated in the “good old days” when breaking news was delivered to our front stoop rather than from a flickering screen. 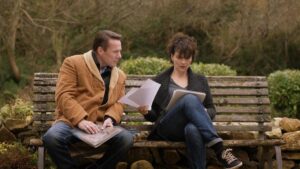 Many great films have examined the excitement and danger of being a foreign correspondent, including Salvador, A Private War, and The Year of Living Dangerously. But this neglected gem hits close to home by focusing on one specific photojournalist (played with quiet power by Juliette Binoche) whose expose of Afghan women forced to become suicide bombers wreaks havoc on her relationship with her husband and two young daughters. She holds fast to the belief that her photos can make a difference while grappling with the role she may have played in a terrorist bombing. When her husband presents an ultimatum, she’s forced to make a life-changing decision. 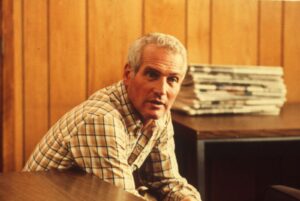 What happens when an ambitious young reporter listens to innuendos, makes tenuous connections and spins them into facts, then prints a story that targets an innocent man? Sally Field and Paul Newman face off in this film that pits an ordinary citizen against the all-encompassing maw of the media. The truth gets lost in their game of cat-and-mouse, until Field is forced to admit the role she played in an innocent person’s death, which kicks her role in the investigation into a new direction.

This claustrophobic, black-and-white film, directed and co-written by George Clooney, focuses on the confrontation in 1953-54 between journalist Edward R. Murrow and Joseph McCarthy, when the chairman of the Unamerican Activities Committee began a smear campaign against ordinary Americans, accusing them of ties to the Communist Party. Interspersed with actual historic footage and more cigarette smoke than any recent film I can remember, David Strathairn as Murrow projects the gravitas and moral rectitude you want from a real-life hero. As the CBS news team works to expose McCarthy’s shoddy tactics, they’re also under pressure from both their sponsors and the network brass to drop their coverage. 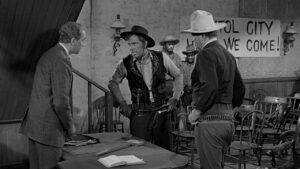 One of the earliest examples of the role media can play in spreading a story—in this case, it’s the Wild West and newspapers are just beginning to flex their muscles when a greenhorn lawyer (Jimmy Stewart) and a hired killer (Lee Marvin) face off in a small-town and the bad guy winds up dead. Edmond O’Brien, the town drunk (and editor of the newspaper) publicizes the event, and before the ink is dry, our hero is speaking in public meetings, running for office, and elected to the US Senate. But is the story true? When Stewart and his wife return for the funeral of local rancher John Wayne, the missing pieces of the puzzle are revealed. 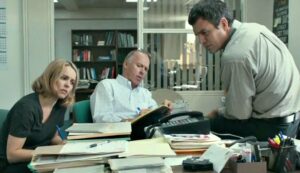 What starts as a simple investigation into rumors about a parish priest evolves, through the dogged efforts of an investigative team at the Boston Globe, into a sexual abuse scandal that rocked the Catholic church to its core. In their quest to uncover the truth, reporters Michael Keaton, Rachel McAdams, Mark Ruffalo, and Brian D’Arcy Jones canvass door-to-door, dig into archives, interview victims, and confront those in power, including the revered cardinal of the Archdiocese, Bernard Law. Before they’re done, they’ve implicated  more than 250 priests and discovered more than 1,000 survivors in Boston alone, with ripple effects through every state in America and over 200 foreign countries.

This gritty film centers on Jeffrey Wigand (Russell Crowe), head of R & D and a corporate VP at tobacco company Brown and Williamson. Wanting to expose the complicity of big tobacco in covering up the addictive properties of cigarettes, he resigns and teams up with 60 Minutes producer Lowell Bergman (Al Pacino). But as ramifications mount up, including the loss of his severance package, the estrangement of his family, and serious legal action, Wigand waffles. Soon it’s not just him under pressure, but all of CBS, as they’re threatened with a multi-million dollar lawsuit at the same time the network is up for sale. Will the news division, including famed reporter Mike Wallace, give in to pressure and bury the story, or will they speak truth to power? 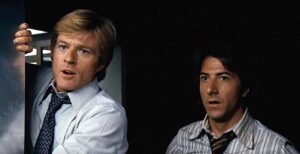 The granddaddy of them all, this film recalls that period of time in the early ‘70s when everyone in the country was reading the Washington Post and their unfolding expose of criminal activity at the highest levels of power. Post reporters Bob Woodward and Carl Bernstein (Robert Redford and Dustin Hoffman) follow the minor story of a burglary at the Watergate Hotel, only to find it’s connected to a massive cover-up of illegal actions that leads straight to Richard Nixon’s White House. This is a shining example of the role investigative journalism can play in exposing corruption—two dogged reporters, armed with little more than a typewriter, a notepad, and their keen ability to ferret out the truth, eventually topple a sitting President. 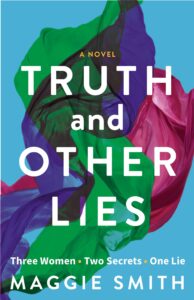 Maggie Smith is the author of TRUTH AND OTHER LIES (March 8, 2022; Orange Hat Press) and hosts the Hear Us Roar podcast, which features interviews with debut women authors. She also serves as a board member for the Chicago Writers Association where she edits  Write City Magazine, contributes quarterly blog posts and oversees a monthly independent bookstore feature. A graduate of Northwestern University’s Medill School of Journalism, she lives in Milwaukee, WI. You can visit her at maggiesmithwriter.com. 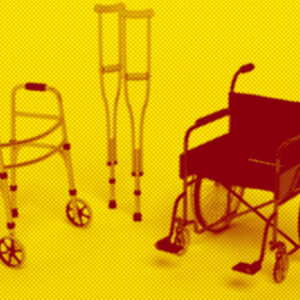 The phrase #RepresentationMatters permeates the queer writing community as a reminder that we all need representations of ourselves...
© LitHub
Back to top