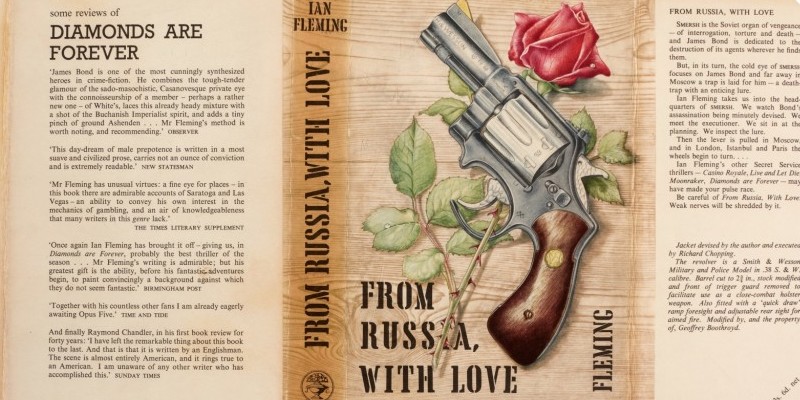 Here’s your chance to bid on Bond

If you happen to smuggle gold or diamonds, as some of Ian Fleming’s villains do, and enjoy rare books and manuscripts, read on. Sotheby’s in London is currently hosting an online sale through November 11 that features “undoubtedly the most significant collection of Fleming ever to appear on the market.” Whose collection it is, we don’t know. As they say in the auction business, it is “the property of a gentleman.” (Fleming, a well-known book collector himself, actually wrote a story titled “The Property of a Lady,” in which James Bond visits Sotheby’s!)

Every Bond book is represented in the 114-lot sale, either in manuscript, proof, or first edition, several containing inscriptions to famous friends, plus a few from Fleming’s own legendary library. Here are the highlights: 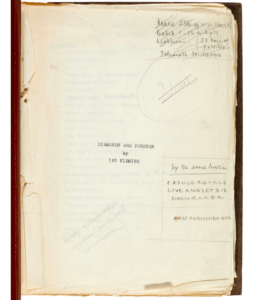 If dropping $100k on 007 is within your means, the lot estimated to top the sale is Fleming’s final revised typescript of the fourth Bond book, Diamonds are Forever, published in 1956. The typescript shows numerous alterations in pencil and blue pen, one of which is worth quoting: he changes “an elderly woman” into “a hatchet-faced woman with a bosom like a sandbag.” 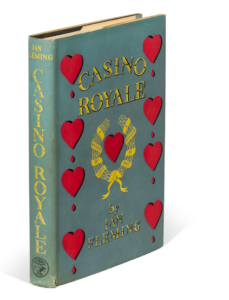 But to begin at the beginning, start with a corrected proof of Fleming’s first James Bond novel, Casino Royale (1953), a spy novel based on his own experience in British naval intelligence during World War II. The original green wrappers may look tatty, but for an estimated $6,000-10,000, the proof will arrive encased in its custom blue morocco box. A clean, standard first edition of the novel in dust jacket could cost upwards of $30,000. 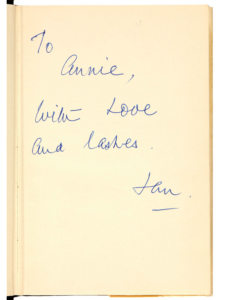 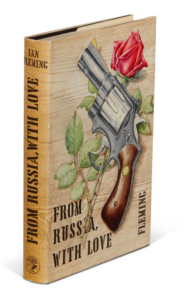 Fleming literally inscribed this first edition of From Russia, with Love (1957): “With Love / and lashes” to his wife, Ann Fleming—nudging its auction estimate up into the $25,000+ range. So says the Sotheby’s catalog: “The author’s inscription presumably refers to the Flemings’ sadomasochistic sexual preferences.” 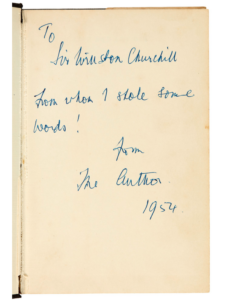 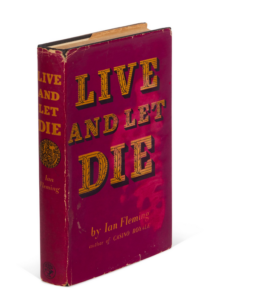 While that’s, um, a provocative dedication to jot on a book’s endpaper, Fleming’s presentation copies to fellow politicos and writers are more perhaps more noteworthy. A first edition of Live and Let Die, inscribed “To / Sir Winston Churchill / from whom I stole some / words!” is expected to draw bidders into the high-five figures. Award-winning Fleming bibliographer Jon Gilbert said of it, “I can think of few better inscriptions, or even those of equal significance.” 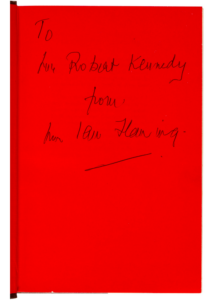 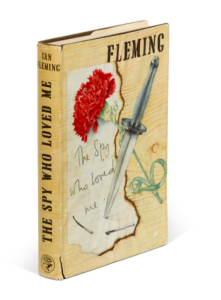 The books Fleming inscribed for John F. Kennedy would rank alongside the Churchill, Gilbert added, but this auction offers up Robert Kennedy instead: a first edition of 1962’s The Spy Who Loved Me, presented to him by the author, should fetch something north of $50,000. Both politicians were huge James Bond fans and had bolstered Fleming’s reputation among American readers. On June 10, 1962, Fleming wrote to the younger Kennedy, “I am delighted to take this opportunity to thank Kennedys everywhere for the electric effect their commendation has had on my sales in America.” 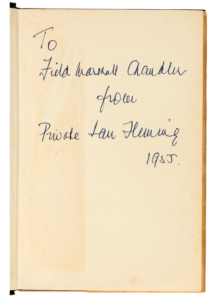 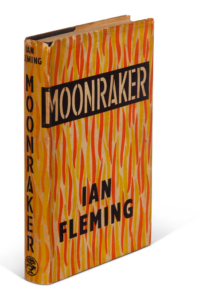 Not one but two first editions that Fleming inscribed to novelist Raymond Chandler are among the auction’s most coveted. Opening at $75,000, Moonraker (1955), presented “To / Field Marshall Chandler / from / Private Ian Fleming,” also retains notes in the hand of Chandler, who concluded that page 18 was “All Padding.” Sotheby’s calls this book “an outstanding association copy,” and that’s not hyperbole; the two writers met in 1955, and according to Fleming’s biographer, Chandler encouraged Fleming to continue with Bond novels when he was ready to give up. Their relationship is embodied in the books they presented to one another. In 1958, Chandler sent Fleming a first edition of his Playback, inscribed “To / Ian / with love / Ray,” and Fleming returned the favor with Goldfinger (1959). Each volume will easily turn out bids in the tens of thousands. 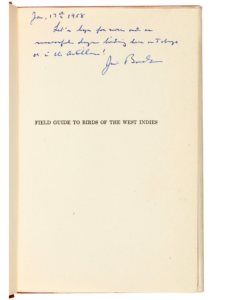 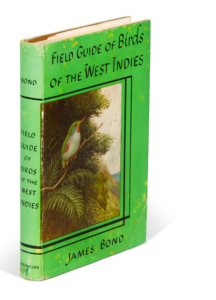 In addition to the books Fleming wrote, several from his personal collection, which was vast—he loved books so much, he launched a magazine called The Book Collector in 1952—are for sale, as well. This 1947 Field Guide of Birds of the West Indies might seem random, but Bond enthusiasts know that Fleming nabbed the author’s name from it, as he was typing up Casino Royale in Jamaica in 1952. He later wrote, “It struck me that this brief, un-romantic, Anglo-Saxon and yet very masculine name was just what I needed, and so a second James Bond was born.” This particular copy is one that the author inscribed to Fleming in 1958, and for $2,000-3,000, it seems like a steal. 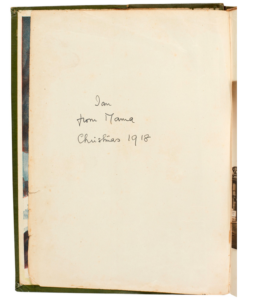 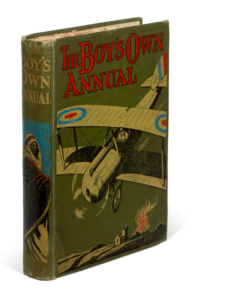 Another sweet pick from Fleming’s library is a book he received as a child that is thought to have inspired the creation of 007. The Boy’s Own Annual, published in 1918, was a Christmas gift from Fleming’s mother when the author was just ten. As the pictorial cloth cover illustrates, it’s a book full of adventures and escapes. Valued at $6,000-9,000, the volume is described in the auction catalog as “well-read and, it seems, well-loved … Many years later Fleming pasted a photograph of himself in naval uniform to the verso of the frontispiece, giving evidence that the volume was indeed of significance.” 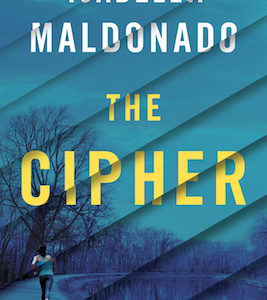 FBI Washington, DC, field office Nina sat on the edge of a stiff vinyl chair in the waiting area outside Special Agent...
© LitHub
Back to top