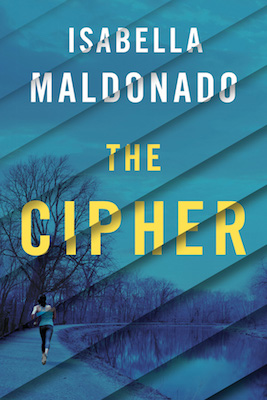 The following is an exclusive excerpt from The Cipher, by Isobella Maldonado. When FBI Special Agent Nina Guerrera was 16, she escaped the clutches of a serial killer. As an adult, when she's caught on a viral video for defending herself against a random attacker in a park, she falls on the killer's radar again. Committing a terrible murder to lure her into chasing him, he plans to turn this pursuit into a game, becoming a social media phenomenon for his clues and riddles. But the game's not over yet.

Nina sat on the edge of a stiff vinyl chair in the waiting area outside Special Agent in Charge Tom Ingersoll’s office. He had been holed up inside with Supervisory Special Agent Alex Conner, her immediate boss, for the past half hour.

Conner had left a message with the front desk directing her to the SAC’s office as soon as she arrived for work this morning. In two years at the Washington field office, her first assignment after joining the FBI, she had never been summoned to see Ingersoll. Certain this had something to do with her off-duty jog in the park yesterday, she replayed the events in her mind for the hundredth time, unable to figure out what—if anything—she had done wrong.

She gingerly touched her side and winced. Had the oaf cracked one of her ribs when he landed on her? Every muscle ached from his crushing weight slamming down on her small frame. The local PD had called an ambulance, but she’d waved off the paramedics, who then made sure her attacker hadn’t sustained lasting injuries. She’d refused transport to the hospital and spent the rest of the evening giving her statement to her former Fairfax County police colleagues. Now she wondered if an X-ray at the ER might have been a smarter move.

Conner opened the door, interrupting her ruminations. “We’re ready to see you now.”

She stood and strode into the office, confident facade in place. Once inside, she greeted Ingersoll with a curt nod before easing herself into one of the two seats positioned in front of his desk.

“I was concerned to hear about what happened in the park yesterday,” Ingersoll began. “Glad to see you’re okay.”

Conner took the seat next to her. “According to the police report, you used a tactical pen on your attacker.”

Agents could carry weapons off duty and were encouraged to do so, but jogging presented a challenge. She couldn’t run through the park holding a handgun without someone calling the police, and there was nowhere to stash it in her spandex running outfit. Given her limited choices, a small device she could hide in her hand was the best option.

She slid the pen from her inside jacket pocket and held it out. “I always carry something for personal defense when I go for a run.”

Conner took the proffered instrument, twisting the cylinder to extend the writing tip. “I agree that a lone . . . person in a heavily wooded park should take reasonable precautions.”

She was sure Conner had almost said lone woman but managed to stop himself before his size 11 wing tip ended up in his mouth.

Ingersoll took the pen from Conner’s outstretched hand to inspect it. “These aren’t standard issue.”

“I used to carry it as a beat cop before I came to the Bureau. Used the carbide tip on the back end to break out the window of a burning car once. Managed to get the driver out in time.” She shrugged. “Handy little tool.”

The black aluminum-alloy casing, slightly thicker than a normal ballpoint pen, seemed innocent enough. In trained hands, however, the gadget could be formidable.

“The police report says you used the mandibular-angle technique,” Ingersoll said, handing it back to her.

The maneuver generated compliance without unnecessary force. She had pressed the tip of the pen on a specific point behind the jawline near the base of the ear, causing excruciating pain to fork like an electric current along his inferior alveolar nerve. After she’d done it, she kept her commands short and simple. His brain, overloaded by stimuli from pain receptors, wouldn’t process complex instructions. When he complied, she’d used a control hold to detain him while a passerby called the police. Her cell phone had been crushed during the attack.

Ingersoll picked up a file from his desk, effectively changing the subject. “This is a copy of the Fairfax County police incident report.” He opened the folder. “Have you been following the story in the news or online?”

She looked from Ingersoll to Conner and back again. “My mobile phone was pulverized, and I haven’t watched television this morning. What’s going on?”

Ingersoll glanced down at the papers in his hand. “Ryan Schaeffer wasn’t working alone when he attacked you.”

“Local PD told me he had an accomplice,” she said. “They tracked him down after Schaeffer turned on him.”

Ingersoll flipped to another page in the file. “Are you aware the accomplice livestreamed the entire incident before he ran away?”

She felt her jaw slacken. “No.”

“As my daughter would say, you’re trending.”

Ingersoll gave her a wry smile that didn’t reach his eyes. “As my daughter would say, you’re trending.” She had the odd sensation of walking into a theater after intermission and trying to figure out the plot.

Conner spoke up. “Someone edited the video and set it to the soundtrack for Wonder Woman.” He gave his head a small shake. “That’s when it went viral.”

“You ordered me straight here this morning.” She spread her hands, palms up. “Never had a chance to replace my cell or go to my office and sign on.”

“The guy who did the soundtrack ran a contest to see who could ID the woman in the video,” Ingersoll said. “Took until early this morning, but somebody finally got it right. Public Affairs has been fielding requests from reporters asking the Director for a comment.”

Her mind reeled. The Director of the FBI, a man in charge of over thirty-eight thousand federal employees, was being hounded for a statement about her. “Holy mother.”

Ingersoll continued, “But that’s not why we asked you to come here.”

She gazed back at him, unable to fathom what else could possibly have happened.

“A killer left a note at a crime scene in an alley behind M Street last night. We have reason to believe it refers to you.”

A chill swept through her. “What crime scene?”

Ingersoll forestalled her question with a raised hand. “I’d like to verify a few things first.” His brow furrowed. “Did you legally change your name from Nina Esperanza to Nina Guerrera ten years ago?”

The tilt-a-whirl in her head spun off in a new direction. “It was part of my emancipation process. I was seventeen.”

Ingersoll and Conner exchanged a meaningful glance. Apparently, she had just confirmed something. Beyond frustrated, she looked from one man to the other, her brows arched in a tacit demand for answers. “I appreciate that this is highly personal,” Ingersoll said. “But it has a direct bearing on what we are about to discuss.”

“The juvenile court records are sealed,” Conner added. “We’re in the process of obtaining a subpoena, but we’d rather hear the story from you first. Did you petition the court for emancipation after you ran away from foster care?”

“Was that after you were . . . abducted?” Ingersoll wouldn’t meet her eyes.

Which meant he knew. Her hands clenched in her lap. They both knew what had happened to her.

“I was sixteen.” She kept her response clinical, devoid of emotion, as she recounted the most harrowing events of her life. “I had run away from a group home and was living on the street. A man drove by in the middle of the night. He stopped and . . . grabbed me. Tied me up in the back of his van.”

She didn’t say what happened next. The unspoken details of the hours she’d spent with her captor hung in the air between them.

“I managed to escape in the morning.” She ended the story abruptly, then directed a question at Ingersoll. “Why is this important now?”

“A sixteen-year-old girl was murdered last night in Georgetown,” Ingersoll said in a low voice. “She had run away from her foster family.” His final words were barely audible. “Her body was left in a dumpster.”

Conner took over. “Metropolitan PD has the case. Their crime scene techs found a note stuffed into her mouth, sealed in a plastic baggie.”

She pictured the scene, and the long-buried pain inside her bubbled close to the surface. A young life snuffed out. A monster prowling the street, searching for his next victim.

Ingersoll slid a sheet of paper from a folder. “The note contained a message printed on standard copy paper.” He tugged a pair of reading glasses from his shirt pocket, shook them open, and slid them on. Glancing down at the paper, he cleared his throat.

Heart pounding, she listened as he read the killer’s message.

“After years of seeking, I thought I would never have Hope again. But today, everything changed. She calls herself a Warrior now. But to me, she will always be . . . The One That Got Away.”

Ingersoll looked up, his eyes finally meeting hers. “He spaces down three times, then adds two more words in all caps.”

She waited for Ingersoll to read the end of the message.

Excerpted from The Cipher by Isabella Maldonado. © 2020 Published by Thomas & Mercer, November 1, 2020. All Rights Reserved. 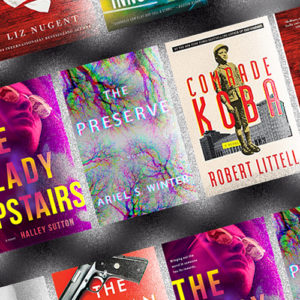 10 Novels You Should Read This November The election results won't be finished coming in for a while now, so while you're waiting to find out the fate of democracy...
© LitHub
Back to top