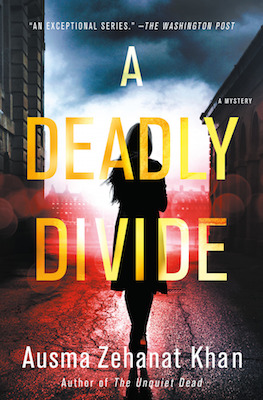 The following is an exclusive excerpt from A Deadly Divide, the fifth in Ausma Zehanat Khan’s Community Policing series, which finds her ethically-minded detectives Esa Khattack and Rachel Getty back home in Canada, investigating the bombing of a mosque in Quebec, and coming face-to-face with rising nationalist sentiment.

The vast machinery of law enforcement was put to work. There were crime scene technicians on the scene, mortuary vans waiting to take bodies to the morgue, grief counselors keeping family members of those who hadn’t returned home away from the scene using a wait-and-see vocabulary, senior officers conferring in government offices with local and provincial politicians, guards at the local station with strict instructions on the transfer of the priest Étienne Roy, others at the hospital with those who had been wounded in the shooting and taken away before Esa and Rachel’s arrival, and armed guards outside the room of one victim in particular.

Killiam was dealing with politicians. Khattak and Rachel were en route to the hospital with Lemaire.

“There’s more,” Lemaire told them abruptly, leaning on his horn to clear the road ahead.

Rachel leaned forward in her seat. “More what?”

“There’s another crime scene. Well, it’s part of the same scene, but we cleared it before you got here. That’s why the press arrived so quickly. That’s why your friend Diana Shehadeh is here.” He said this to Khattak, but the words didn’t have the effect Rachel was anticipating; she thought Khattak might interpret them as an insult and choose to respond in kind. Instead, his face had gone pale—but then, he often made connections that weren’t apparent to Rachel.

“The shooter began in the women’s section?”

Lemaire turned left, his car slowing down on the long climb up the hill.

“How did you know that?” He made no effort to mask the unease in his voice.

“We were called to the scene because of our expertise.”

“We were called to the scene because of our expertise.”

Khattak’s tone and words were neutral, but Rachel knew the undercurrents all too well.

“Yes, the women’s section. It’s in the basement. Four more bodies. We processed them first. They’re already at the morgue.”

“So the shooter came in the side entrance.”

Khattak’s voice had thickened slightly. He turned to look out the window.

“Back entrance. This is not the most enlightened community.”

Lemaire made no apology for his statement. When Khattak didn’t react, neither did Rachel.

She’d learned to hold her tongue, to wait for the opportune moment to speak. And she kept Martine Killiam’s assessment of Lemaire in mind. She’d called him an excellent police officer, one of the best she knew. So Rachel would wait to see if that was true. She asked a diferent question, hoping to confound Lemaire’s expectations.

“If the shooter hit the women’s prayer area first, why didn’t the men have enough time to escape?”

Lemaire drew into the hospital’s parking lot. The receiving area was clogged with ambulances, their lurid lights flashing against the gray concrete. It struck Rachel that for a scene of such urgency and chaos there was a cathedral hush around events.

“Christ,” Rachel whispered. “How many were wounded in the shooting?”

“Another dozen. The chief surgeon has warned us that many of them will die. You know what an assault rifle does to a person’s body—the wounds are too severe. And to answer your other question, the basement is insulated. It has no windows, and the door and rafters are solid.”

Khattak shook his head. “They would still have heard an assault rifle.”

“You’re right,” he said. “But each of the four women in the basement was killed execution-style. A single gunshot to the head.”

“Back or front?” Khattak asked.

“Front. Just like the one in the upstairs hallway.”

“It was personal, then. The shooter wanted to look them in the eye. Do you have anything else in terms of victim profile?”

Lemaire had locked his vehicle and they were headed to the hospital concourse, slipping past the cordon set up by team members to hold back nonessential personnel.

“Too soon. It’s too soon for any of that. The women were different ages, different backgrounds. The only thing they have in common is that they all wore the veil.”

At the elevator, Lemaire paused to consider her. He didn’t say, as she expected, What difference does it make? He rocked back on his heels in the lift.

“So that’s why they called you. Because of the politics here.”

“Lemaire,” he reminded her. “I don’t let anyone call me sir.” He went on to answer her question. “We could see their faces, so I suppose they wore head scarves. Possibly that made them a target, or maybe they were just in the wrong place at the wrong time.”

“No.” Khattak’s response was definitive. “A head scarf worn in the mosque doesn’t necessarily translate into one worn outside the mosque. We’ll need to check that out as it could speak to targeting. But execution-style killing is personal, regardless. We can assume the man in the hallway was killed in the same manner to buy the shooter . . . or shooters . . . time to use the assault rifle. Which brings us to the subject of your priest, a subject we need to discuss.”

The elevator doors opened on to a scene of chaos. Though triage was still taking place in the emergency department, the surgical ward was packed with medical staff, police officers, and family members.

“You think this is a hate crime, eh?” There was something needling about his tone.

Khattak replied evenly, “I think it’s an act of terror. That’s why INSET is here.”

Lemaire ran his hand over the bristles on his chin. He nodded at a passageway that led off the main reception area. At its end, four armed guards were stationed outside a door.

It was Rachel’s turn to be cut off.

“We have a suspect under guard in a hospital room. He’s being treated for shock.” He shifted his body closer to Khattak, sizing him up head to head. “We caught him running from the mosque after police arrived at the scene and began lockdown. When we caught him, he had blood all over his clothes, and on his face and hands.” He jabbed Khattak’s chest with a finger. “If this was a hate crime, or an act of terrorism as you say, why was he shouting, ‘Allahu Akbar’?”

Khattak took a step back. But he did so in a way that suggested nothing more than distaste at Lemaire’s unwarranted encroachment.

“Who was he? Who did you arrest when it was your priest who was found with the rifle in his hands?”

Despite the press of people waiting to speak to him, Lemaire’s attention focused on Khattak. “Fine, then. He identified himself to police.”

Khattak was shaking his head. He pulled Lemaire a little aside.

“So you’ve arrested a young black man, while the priest you found with the weapon in his hands hasn’t been processed or arrested?”

“So you’ve arrested a young black man, while the priest you found with the weapon in his hands hasn’t been processed or arrested?”

Lemaire fired up, at once. “There’s no prejudice here. Not in my department. The boy ran, he was arrested.” He caught the sharp edge of Khattak’s smile, the instant of recognition, and his eyes flared in response. He nodded to himself, clasping his large hands together.

“All right. You’ve made your point, Inspector Khattak. I won’t make assumptions about you, and you won’t make them about the Sûreté du Québec.” He glanced over at Rachel. “You should have warned me about your boss.”

Rachel flashed him an insincere smile. “The superintendent said you’re good at what you do. I figured you’d find out for yourself.”

Khattak interrupted. “Amadou Duchon. Where is he?”

Lemaire pointed to the door under guard. “He’s been cautioned and interviewed.”

“By you?” Khattak’s eyebrows went up.

“And did he confess?”

Khattak was heading toward the room under guard when a commotion broke out at the elevator. A young woman’s voice called out Rachel’s name.

Rachel turned at once. For a moment, memory slashed through her, sharp and sickening, of a beautiful, blank face on a table at the morgue.

The face looking back at her was just as beautiful but very much alive.

She hurried over to the elevator and clasped the young woman’s hand urgently in her own.

“Alizah,” she whispered, shaken by a surge of joy. Sometimes the past was less like a weapon that wounded you and more a harbor from pain.

She wasn’t alone in feeling it. Alizah reached out and hugged her tightly. Then both women turned at the sound of Khattak’s voice.

Alizah stood still, her arms dropping to her sides.

She tilted up her chin, eyeing Khattak with an expression Rachel couldn’t interpret. Until she spoke, her voice rich with undertones of regret.

“I’ve missed you,” she said to Khattak, as if the admission surprised her.

Khattak regarded her gravely, his green eyes steady on hers.

With a sigh of defeat, he said, “Not as much as I’ve missed you.”

Then he seemed to remember where he was. “Give us a few moments,” he said. “We’re in the middle of something.” He gestured at the reception desk and reluctantly she moved away.

When he would have headed off to Amadou Duchon’s room, Lemaire stepped into his path. Rachel’s eyes widened at Lemaire’s confrontational air.

Something in Khattak’s face softened.

“From a case some time ago in Waverley. From the murder of Miraj Siddiqui.”

From his expression, it was clear Lemaire was familiar with the case. A young woman had been found murdered on the pier in the Ontario township of Waverley—a case that had made the national news as the first in a string of so-called honor killings.

Lemaire swore loudly in French. “You worked that case? Meaning you have a prior relationship?”

Khattak’s eyes narrowed in suspicion. “I didn’t know she was here. I haven’t spoken to her in some time. How do you know her, Lemaire?”

“She’s been a goddamned thorn side in my side since the day she moved to this town. She’s a graduate student at the Université Marchand. A journalism student. You watch her, Khattak. And I don’t care what your relationship with her is, you don’t tell her anything about Amadou Duchon.”

He glanced back at the reception desk and groaned. Next to Alizah, a smartly dressed blond woman was waving to Lemaire from the other side of the corridor. He raised a hand in halfhearted greeting.

The woman was so attractive that Rachel was taken aback by Lemaire’s reaction.

“Isabelle Clément. Press liaison for the premier. He sends her to represent the province when matters like this occur. I’ll need to speak to her.” His eyes moved to Rachel’s face. “Let me speak to her first; then I’ll introduce you.”

It would have been good to know how the premier of Québec was planning to spin this tragedy—as a premeditated hate crime or the act of a deranged lone wolf? But the players were just beginning to assemble, so Rachel agreed to wait.

From A DEADLY DIVIDE. Used with the permission of the publisher, Minotaur Books. Copyright © 2019 by Ausma Zehanat Khan. 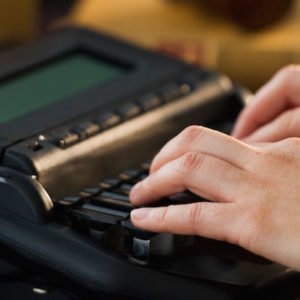 Stenography Stole My Mother's Fingerprints My mother has no fingerprints. Or, at least, she has no identifiable fingerprints. This is a fact she learned at a federal...
© LitHub
Back to top