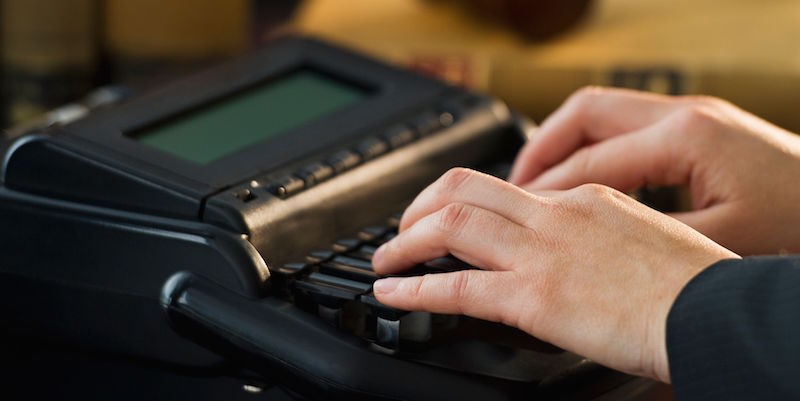 Craft Advice and Life Lessons from a Court Reporter

My mother has no fingerprints. Or, at least, she has no identifiable fingerprints. This is a fact she learned at a federal courthouse, where they run a background check on every contract employee before granting them access to the hallowed halls. My mother’s prints turned up as little more than a smudge. They did not give up any pertinent information as to who she was or what she might have done.

My mother is not a criminal. She is a freelance court reporter, a career she began when I was three. She types approximately two hundred and twenty-five words per minute. She switched careers from legal secretary to stenotype because she wanted to make her own hours and be her own boss. My father was a Kentucky State Trooper who worked unpredictable hours at best. I was an only child who often interrupted my mother’s work in her home office to ask how much longer I had to nap, how much longer was she going to be working, how much longer . . . I didn’t understand then that my mother was processing some dark demons—car accidents complete with gruesome photos, threesomes that led to divorce, teacher revocation hearings resulting from possession of child pornography.

The very profession that brought her to the federal courthouse is the one that took her fingerprints. She is the keeper of the official court record, the person in the corner of the courtroom with a straight spine and keen ear. She is the one who must capture every word with her flying fingers, wearing the pads down to smudges.

I can remember whispered conversations between my parents, cop and court reporter, truths they knew about the world because they had seen them with their own eyes, truths they wanted to keep from me but also wanted me to know so I could protect myself.

When I was older, my mother sensed my own obsession with language, the beginnings of a career as a writer even though I couldn’t yet admit it to myself. I wanted to be an ophthalmologist, for no reason other than that it required extensive education and training, and I liked school. My mother asked me if I might like to proofread some depositions for her. I was thrilled. What would I get? Murder? Intrigue? Sex?

She is the keeper of the official court record, the person in the corner of the courtroom with a straight spine and keen ear. She is the one who must capture every word with her flying fingers, wearing the pads down to smudges.

Tax evasion. What seemed like a thousand pages of it. As my eyes began to cross, I worked my way through questions and answers, correcting the witness’s Kentucky grammar, crossing out any prepositions the attorney put at the end of the sentence and suggesting they be moved elsewhere. My mother took one look at my work and, although she acknowledged it was grammatically correct, she also said something that has resonated with me for decades. “This isn’t the way people talk.”

This one sentence has shaped my career as a writer, especially in television. I had been trying to make everyone in that deposition sound the same. No one does. The way people talk, the similarities and differences, are a key facet of character. Your dialogue gives you away—where you’re from, your education, your confidence or lack thereof.

In all the years I helped her with proofreading, I never heard the tapes of hearings and depositions my mother kept in order to double check her work, but, even with only words on paper, I could hear the different voices in what would become the official court record as clear as old friends. I became comfortable with people I’d never met in person talking to me. It didn’t seem strange.

Even more important was the fact that my mother trusted my knowledge and attention to detail enough to allow me to check her own work. It was not a responsibility I took lightly. We were a tight team, given I was an only child, and my dear father was working the road, his shifts constantly changing in a way that did not allow him to ever get proper sleep. When he entered the canine unit of Kentucky State Police, he had the only bloodhound for miles. The calls were constant—drugs, bodies, abductions. My mother and I were often on our own, because my father and Duke were out dealing with literal life and death.

Growing up, my mother was a talented pianist, her fingers flying over the ivory keys with an intensity and focus that would have sent her to Juilliard, had she not married the wrong man way too young (Note: Not my father—he and my mother have been married for over forty years.) I did not inherit any of my parents’ musical talent—my mother’s piano playing or my father’s pitch perfect singing voice. I tried to quit piano lessons with my mother when I overheard her laughing with a friend about how, at age eight, I wanted to be playing Bach, not Swans on the Lake, a repetitive tune that still gives my mother nightmares in its monotony.

The next morning, I told her in tears that I had heard what she said. My mother apologized. Then she sat me down and taught me Bach. She didn’t make it easy, but she sat next to me while I struggled, with her straight spine and her quiet strength, letting me know I might be out of my league, but she would always be right next to me. As a writer, this means the whole world.

MELISSA SCRIVNER LOVE was born to a police officer father and a court stenographer mother. After earning a master’s degree in English Literature from New York University, Melissa moved to Los Angeles, where she has lived for over a decade. During that time, she has written for several television shows, among them Life, CSI: Miami, and Person of Interest. She and her husband, a comedy writer and Los Angeles native, welcomed their daughter in 2014. Her second novel in her Lola Vasquez series, American Heroin, is now available from Crown Publishing Group.