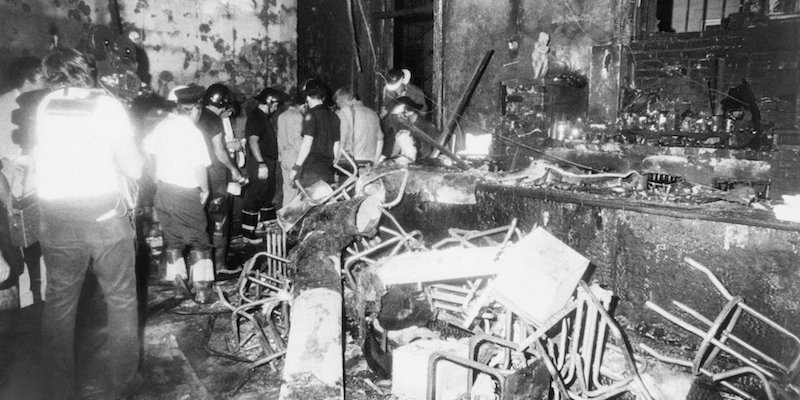 The following passage is excerpted from Tinderbox: The Untold Story of the UpStairs Lounge Fire and the Rise of Gay Liberation, currently nominated for an Edgar Award in the “Best Fact Crime” category. The excerpt describes the immediate aftermath of the UpStairs Lounge Fire, an arson attack on a gay night club in 1973 New Orleans that claimed 32 dead and many more injured. The failure of police to thoroughly investigate the incident helped spur on the growing gay rights movement.

Barreling down a stairwell that plunged from the rooftop, and the secret back exit of a burning gay bar, Ronnie Rosenthal emerged into a New Orleans street teeming with fire trucks. Ronnie guided Ricky Everett, a fellow fire survivor, from spot to spot. Cloaked in soot and human cremains, Ricky was unable to see for the tears clouding his eyes. “They had all that space for people lying there [on the street],” recalled Ricky. “And they were pulling the burning clothes off of them.” By some strange fate, neither Ricky nor Ronnie turned the corner onto Chartres to witness Ricky’s best friend, pastor Bill Larson, in his final repose: seared to the windowsill of the Up Stairs Lounge, one floor above them.

Closeted church deacon Joseph “Courtney” Craighead, however, did so and became dumbstruck. The legendary essayist Michel de Montaigne once described this traumatic condition as the body’s inability to express the “torpor that paralyzes us when events surpassing our capability overwhelm us.” Indeed, Courtney struggled to inhale and exhale alongside Rusty Quinton and the other fire survivors who, by some miracle or some curse, were forced to look up at carnage also intended for them. Their guilt was sudden and uncontrollable.

Courtney moved like a stranger in his own limbs. Dropping all of his social defenses, which had protected him from the dangers of wayward openness at a time when openness about one’s sexual secret could cost a man his job, his home, his family, and his freedom (not to mention, his church), Deacon Courtney Craighead inadvertently used his real name when answering questions from bystanders and police. Just then a throng of reporters and news crews seemed to materialize, among them John LaPlace of the Times-Picayune and Bill Elder of the CBS-affiliate WWL-TV. They showed press credentials, and police lifted the tape to allow them immediate access.

In this era, little adversity between police and the press seemed to exist. It was Frank Hayward, the police information officer serving as the department’s liaison to the Mayor, who managed the list of journalists approved to receive official city press passes for crime scenes. If a press pass was denied or revoked, a journalist ran the risk of getting scooped, and thus could members of the press be favored or squeezed by the gatekeepers of City Hall.

En masse, reporters rushed survivors like Courtney, who’d only had seconds to escape a room of friends being eaten alive by an inferno.

En masse, reporters rushed survivors like Courtney, who’d only had seconds to escape a room of friends being eaten alive by an inferno. The cacophony of voices made it difficult for Courtney to hear orders from police and firefighters. As the ranking officer on the scene, Major Henry M. Morris of the New Orleans Police Department made a statement to the States-Item, a New Orleans newspaper, about the Up Stairs Lounge. “Some thieves hung out there, and you know this was a queer bar,” he said. A second police officer, perhaps attempting to qualify Morris’s comment, explained how it was “not uncommon for homosexuals to carry false identification.”

Ronnie LeBoeuf, a photojournalist, captured images of the dead and despairing. “Fire came up the stairs fast,” Courtney muttered to the States-Item, which quoted him by name—linking him indelibly to the incinerated gay bar called the Up Stairs Lounge. “Two guys told me to jump, and I was small enough,” survivor Adolph Medina said to the Associated Press. “What was done was done intentionally,” an anonymous man, interviewed with his back to the camera, told Elders, the WWL reporter. Seeing the macabre, ashen-gray face of Bill Larson in the window, photographer Pat Bourke of the Daily Record, displaying a gallows humor common to newsmen, took a picture and jested, “At least it was only a mannequin factory.” “Those aren’t mannequins,” someone else told him.

A nearby tourist provided testimony to the Daily Record: “We watched those people burn before our very eyes, and we couldn’t do a thing to help them. Don’t use my name. I just won’t think about it, it never happened, it never could have happened.” Down the street, an Associated Press reporter watched a bartender set up a drink station on the sidewalk and do “a brisk business with spectators.”

Up Stairs Lounge bartender, and fellow survivor, Buddy Rasmussen wound through the crowds looking for a person of interest. Something instinctual told Buddy that the destruction of his bar was connected to a ruckus that happened earlier. “I had already in my mind,” Buddy later told investigators, “and said to myself that it was arson because of the way this fire started.” Buddy ran into Mark Allen Guidry, a nineteen-year-old hustler who’d come to their happy hour “beer bust” with a man named Roger Dale Nunez, a man who’d screamed “I’m gonna burn you all out” when Buddy ejected him from the premises. It was Guidry who directed Buddy toward a hustler bar named Wanda’s, mere steps away. At the corner of Royal and Iberville Streets, among well-dressed hotel guests observing the blaze from a distance, Buddy spotted his man. He ran up to Roger, who was drinking a cup of beer, and grabbed hold of him.

Buddy Rasmussen wound through the crowds looking for a person of interest. Something instinctual told Buddy that the destruction of his bar was connected to a ruckus that happened earlier.

“Where have you been?” Buddy asked.

Buddy attempted to drag Roger toward a plainclothes policeman.

“Why are you holding me?” Roger yelled as he struggled to get away.

Reaching the officer, Buddy tried to explain that this person he was restraining had been causing trouble at the Up Stairs Lounge just before the fire. Buddy demanded that Roger be held for questioning. Given the era, this policeman had probably never had any interactions with homosexuals other than arresting a few. At first, the officer feigned distraction, ignoring the hubbub as these two gay men struggled and shouted in front of him. After a few minutes, the officer looked at Buddy in the eyes and gave him the proverbial “move along.” Buddy released Roger, who stumbled a few steps and just stood there, watching the calamity. “I couldn’t convince the policeman that he should hold this person, and I let him go,” Buddy later told investigators.

Moments later, Courtney Craighead ran up to Buddy and pointed accusingly toward Roger. Buddy threw up his hands and explained what had just happened. The closeted church deacon walked over to that same officer and attempted to clarify the matter. According to the fire marshal report, “The police officer told [Courtney Craighead] that he didn’t have the authority to restrain the subject and referred him to the lieutenant that was standing across the street from them, in front of the Walgreens.” Courtney and Buddy then approached the lieutenant and told the same story. “You think you know police business better than I?” the officer yelled. After muttering something into his walkie-talkie, he turned back and told them, “Go back across the street, you’re in the way.”

Courtney and Buddy obeyed, lest they be arrested for violating one of the city’s anti-homosexual ordinances or more brazenly accused of attempting a “crime against nature,” a felony charge with a mandatory prison sentence that unscrupulous police could press on mere suspicion. Plus, neither could be sure they had the requisite cash to pay off the newspaperman in the event of such an arrest—to stave off a “sex crime” story. So deacon and barkeep watched helplessly as Roger Dale Nunez slowly disappeared into the masses. 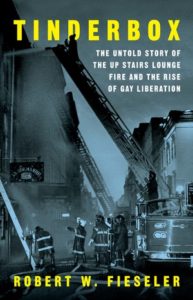 Robert W. Fieseler is a recipient of the Pulitzer Traveling Fellowship and the Lynton Fellowship in Book Writing. A writer for Buzzfeed, Narratively, and elsewhere, he currently resides in New Orleans. His latest book, Tinderbox: The Untold Story of the Upstairs Lounge Fire and the Rise of Gay Liberation, is currently nominated for the Edgar Award for Best Fact Crime.

Mariana Dimópulos’ All My Goodbyes, translated by Alice Whitmore, is a sinister, deceptive book. Its scenes slide smoothly...
© LitHub
Back to top