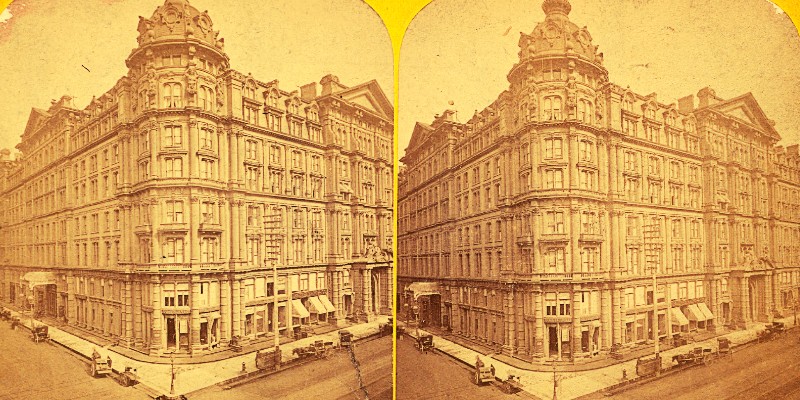 In 1882, in Chicago's most opulent hotel, a woman shot a man dead. Her defense would start a citywide debate about morality.

Muffled voices and two gunshots shattered the early-morning stillness on the sixth floor of Chicago’s opulent Palmer House hotel. “Murder! Murder!” a man’s voice cried out. Guests spilled into the hallway to find Charley Stiles, clad only in a nightshirt, slumped outside his suite. He had been shot through the heart.

A woman emerged from Room 660, cradled his head in her arms and kissed him as he died. Madeline Sturla appeared to be in a daze. Hotel staff and the police were summoned. Sturla spoke, but months later those present could not agree on what she said.

“I shot him,” a hotel clerk recalled her saying. “If he had not tried to force me from the room this thing would not have occurred.” Another witness put a more sinister spin on her words: “I told him I would do it, and I have done it,” she supposedly declared. “Let the law take its course, and I don’t care if I swing for it.”

A five-chamber revolver was found on the floor of Stiles’s room. Sturla had pawned a dress only hours earlier to raise the money to buy it. Chicago police and Cook County State’s Attorney Luther Mills were convinced it was a case of premeditated murder.

But a different and more disturbing picture soon emerged. Stiles had been a fast-living “man about town,” as one newspaper put it, squandering thousands of dollars at casinos and racetracks. Sturla was a prostitute who had worked in one of the city’s most infamous brothels, but for years he had passed her off as his wife. Most shocking of all, her illicit earnings had funded his gambling addiction and he had beaten her when she refused to hand over her money. 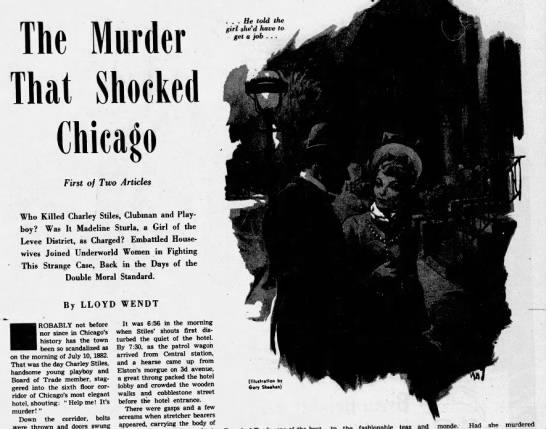 The Chicago Tribune denounced the “gross immorality” and “brutality” that had culminated in the shooting on the morning of July 10, 1882. “‘The wages of sin is death,’” an editorial noted, “Stiles has paid the penalty. Now let the woman suffer also.”

If convicted of murder, Sturla might hang. But in a Gilded Age #MeToo moment, her abusive lover would also be on trial. And so would Chicago’s shameful tolerance for gambling and prostitution—the vices that ultimately led her to confront Stiles with a loaded gun in her hand.

Chicago was booming in 1882. In the eleven years since the Great Fire, a new city had risen from the ashes and the population had grown to half a million. The Palmer House, opened in 1873 after real estate tycoon Potter Palmer’s original hotel was razed, was a symbol of the resurgence and was extravagantly decorated— right down to the silver dollars imbedded in the floor of its barber shop. Chicago was “full of energy and enterprise,” said visiting British writer Lady Duffus Hardy, and “wholly devoted to money-making.”

There was money to be made by flouting the law. Gambling and prostitution thrived in the early 1880s during the reign of Mayor Carter Harrison, in enclaves with ominous names such as Satan’s Mile and Hell’s Half-Acre. Bribes and kickbacks ensured the police would turn a blind eye and politicians would keep reformers at bay. The city, said one exasperated resident, was “completely in the hands of gamblers and crooks.” The Levee, a collection of casinos and brothels at the south end of The Loop, became a symbol of the depravity and immorality of a city one critic christened the “the Gomorrah of the West.”

This was the seedy underworld that Sturla and Stiles inhabited.

Born in Italy, Theressa Carlotta Sturalatta was still a child when her family settled in  Baltimore. She had a fine singing voice, played the piano and was just 14 when she ran off with a boyfriend who abandoned her. Penniless and ostracized by her father, she had wound up in a brothel. She was calling herself Madeline Sturla when Stiles met her there; in 1878 he whisked her away to Chicago as his mistress.

The son of an Illinois banker and politician, Stiles made and lost small fortunes as a commodities trader. He belonged to “that adventurous untameable class of men who feed on excitement,” noted the Chicago Times, and joined the Owl Club, a private club in the McVicker’s Theatre Building on West Madison whose members “consorted with prostitutes, gambled, wore diamonds and drank champagne.”

In press interviews after the shooting, Sturla slipped easily into the role of a femme fatale. Just 21 and 11 years younger than Stiles, she won over journalists with her dark eyes, world-weary sadness and tales of horrific abuse. She had loved Stiles, she said, but he had reneged on promises to marry her. He had lived off—and had gambled away—money she earned performing music in brothels and as a prostitute. She had endured years of punches, kicks and threats. Hers was a life “overshadowed by sin,” one reporter noted, “and crowned with a crime.”

Chicago’s richest and most flamboyant madam was in Sturla’s corner. Carrie Watson’s lavishly decorated, 20-room brownstone on South Clark Street—considered “the show place of the Levee”—was Chicago’s most famous brothel before sisters Ada and Minna Everleigh established the “club” bearing their name in 1900. She travelled in style, in a white carriage drawn by four black horses, and made no apologies for her profession. Prostitution, she rationalized, was the “natural result of poverty on the part of the woman and passion on the part of the man.”

Watson, who had given Sturla refuge when she tried to leave Stiles, launched a defense fund. “We’re going to prove our girls have some rights,” she announced. “It’s high time somebody killed Charley Stiles.” Enough money was raised to hire an ace criminal defender. Alfred Trude had more than 30 murder cases under his belt, had won acquittals in all but five, and had yet to lose a client to the gallows. Described as eloquent and fearless in the courtroom, he was admired for his ability to “work upon the sympathies of a jury.”

Watson’s brothel catered to a clientele that included “statesmen, lawyers and judges,” she would boast at Sturla’s trial. This connection to the upper crust may have drawn a respectable ally to the cause: Hortensia Black, the wife of a prominent lawyer and a leading advocate for temperance and women’s rights.

If she could stand trial before a jury of her true peers—a jury composed solely of women, Black added, “we would not be long in rendering our verdict.”

Sturla, Black argued in a letter to the editor, had done “the natural, if not the right, thing when she shot her oppressor! That a man should bet and pay bills on the earnings of a woman’s body! Isn’t that horrible!” If she could stand trial before a jury of her true peers—a jury composed solely of women, Black added, “we would not be long in rendering our verdict.”

Stiles had his supporters as well. Fellow traders remembered him as “witty and companionable,” the life of any party he attended. The Owl Club released a statement lamenting the loss of their “brilliant” and “honorable” comrade. One Chicago broker, however, acknowledged that Stiles had “run with desperate people” and expressed surprise that “he was not killed before.”

Some men rallied to Sturla’s camp, but not from a sense of outrage over Stiles’s abuse. Many “went daft over the beautiful murderess,” claimed one account. Love letters and offers of marriage arrived at her jail cell as she awaited her day in court.

Trude went on the offensive when the trial opened in November 1882. The “hellish brutality” his client had endured, he insisted, made her “the living victim” of the affair.

Dressed in mourning black, she removed a veil covering her face for the first time when she testified.

Sturla was his star witness. Dressed in mourning black, she removed a veil covering her face for the first time when she testified. She burst into sobs as she recounted Stiles’s assaults and claimed she had gone to his hotel room to announce that their tumultuous relationship was over. When he seized her by the throat, she drew the revolver and it had discharged during the scuffle. “I killed him!” she screamed, before she collapsed and writhed on the floor; bailiffs carried her to an adjoining room until she regained her composure. Witnesses had seen bruises on her neck, which seemed to confirm her story. 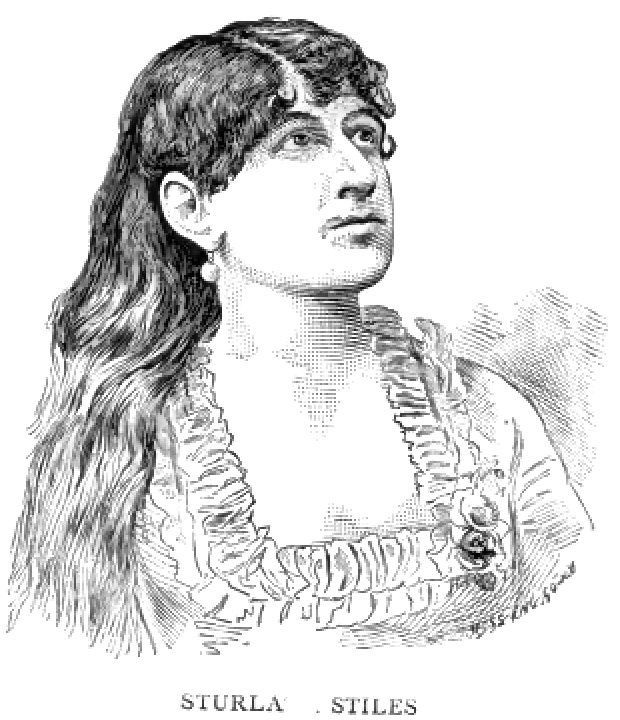 Not content with a plea of self-defense, Trude called a succession of doctors who were convinced Sturla had been insane when she shot Stiles. Drawing on the rudimentary medical and psychological knowledge of the times, they insisted the mental abuse and physical injuries she had suffered had triggered an episode of madness.

After more than 20 days of testimony and legal arguments, the all-male jury deliberated for a full day before declaring Sturla guilty of the less-serious offense of manslaughter. It was a compromise verdict—two jurors (including one overheard to say “she ought to be hung” before the trial even began) had demanded a murder conviction and death sentence, but had relented. It was an example of what writers Lloyd Lewis and Henry Justin Smith would later term “the chivalry of Cook County juries” when faced with a female defendant.

Many suspected Trude and Sturla had staged her courtroom theatrics; as if to prove them right, she smiled as the judge imposed the minimum sentence, one year in prison.

The Tribune changed its tune and judged the verdict to be fair, in light of the “long, cruel, and persistent” abuse Sturla had suffered. It also welcomed the jury’s rejection of the “flimsy” insanity defense. Not everyone agreed. In small-town Mattoon, Illinois, a newspaper editor condemned the jury for allowing Stiles’s killer to escape “unwhipped by justice.” Author O.E. Turner, who published a 265-page account within a year of the trial, argued that Chicago’s authorities, by allowing gambling houses and “low rum holes and brothels” to operate with impunity, bore some of the blame for the tragedy.

Vice was still tolerated a decade later, the lessons of the lurid Sturla-Stiles affair unlearned. A “Pleasure Seeker’s Guide” published for visitors flooding into the city for the World’s Columbian Exposition of 1893 included an account of the “high-living” gambler who died at the hands of his abused mistress. Suite 660 of the Palmer House, “the room made famous by the great tragedy,” the guidebook noted, “is still pointed out to new guests.”

Dean Jobb, the author of Empire of Deception (Algonquin Books and HarperCollins Canada), is the true crime columnist for Ellery Queen’s Mystery Magazine. His next book, set for release in July 2021, recreates the crimes of serial killer Dr. Thomas Neill Cream, who terrorized Victorian-era London and murdered four people in the Chicago area in the 1880s. You can follow him on Twitter: @DeanJobb. 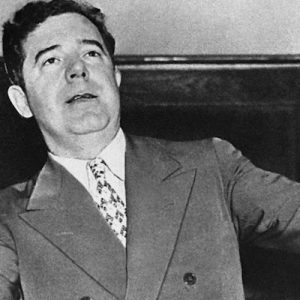 Through The Voter File and my broader Jack Sharpe series, I aim to write political thrillers which work within the real-world...
© LitHub
Back to top