Crime Fiction in the Casablanca of the South Seas

Usually it’s a book that suggests the subject city of this column. I’ll read, or remember reading, a crime novel that was superbly atmospheric, incredibly redolent of the city it is set in and then I’m off, looking for more. Just occasionally I reverse the process—think of a city and specifically seek out its crime writing to discover new authors and new worlds. This Crime and the City is the result of the latter approach.

Having visited Macau for the past three decades, watching it transform from a sleepy Portuguese colony to a “Special Administrative Region” of the People’s Republic of China; from a resort of amateur gambling dens and down-at-the-heel hotels to a full-fledged Las Vegas of the East, I presumed there must be plenty of good crime fiction set in the enclave. However, for reasons that remain somewhat mysterious to me, there’s not a lot. Nevertheless, Macau is a legendary crime city and should not be left out of this series. To be frank, Macau has always had something of a reputation…

W.H. Auden and Christopher Isherwood briefly visited Portuguese-controlled Macau in 1938. The 1930s had made Macau’s reputation—“Casablanca on the South China Seas” — and so they weren’t surprised to find the brothels, casinos, opium dens and gangsters they’d expected. Macau was a Hollywood gangster B-movie with Chinese characteristics. Auden’s poem “Macau” included in the 1939 travelogue of their joint China, Hong Kong and Macau trip, Journey to a War, describes the city’s transnational flavor with telling irony:

A weed from Catholic Europe, it took root
And grew on China imperceptibly
Churches beside the brothels testify
That faith can pardon natural behavior. 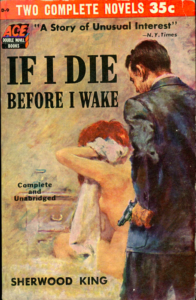 Sherwood King’s If I Die Before I Wake (1938) is a fantastic American noir. Orson Welles would adapt it for Rita Hayworth as The Lady From Shanghai in 1947. Neither Shanghai nor Macau get a mention in the movie oddly, but in the novel we have Elsa Bannister, a White Russian émigré of dubious reputation born in Chefoo (now Yantai) on the China coast. Elsa explains her past:

“Chefoo is the second wickedest city on earth.” 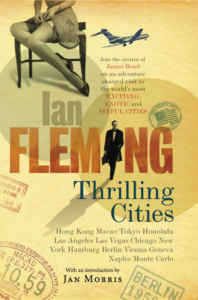 Back in 1959 Ian Fleming arrived in Macau thinking it just had to be included in a travel book he was compiling for the Sunday Times newspaper to be called Thrilling Cities (eventually published in 1964). Macau is indeed a worthy partner to the other dozen cities Fleming included—Hong Kong, Tokyo, Honolulu, Los Angeles, Las Vegas, Chicago, New York, Hamburg, Berlin, Vienna, Geneva, Naples and Monte Carlo. Fleming encountered gamblers, prostitutes and opium as he had hoped and expected. But he also stumbled upon his model for the character of Goldfinger (probably written on the plane home and published in 1959), a certain Pedro José Lobo. Goldfinger was originally titled The Richest Man in the World, but the Goldfinger name was so good they used it for the title. Unfortunately none of the novel takes place in Macau. Fifty-three years later Fleming’s most famous creation, James Bond, did finally make it to Macau in the movie Skyfall (2012). 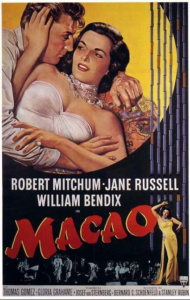 Josef von Sternberg visited to film Macau in 1952 starting the movie of the same name with Robert Mitchum and Jane Russell. Halfway through Howard Hughes fired von Sternberg and replaced him with Nicholas Ray and the picture eventually got finished. It’s a smoldering noir that reinforces every cliché about Macau—adventurers on the run, smoky nightclubs, smuggling pirates and, of course casinos. But it’s a movie from an original screenplay…

So where are all the good crime books about Macau? Well, here are a few…. 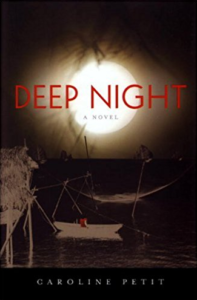 Caroline Petit’s Deep Night (2008) is the story of Leah Kolbe, a British resident of China who, in 1937, escapes the invading Japanese army and finds refuge in neutral Macau. In Macau Leah takes a Japanese lover and begins spying for the British as historical events rush towards the eventual fall of Hong Kong, on Christmas Day 1941, to the marauding Japanese army. Petit also wrote an earlier Leah Kolbe novel, The Fat Man’s Daughter (2006), where our heroine heads up into Japanese-occupied Manchuria to track down antiquities smugglers. 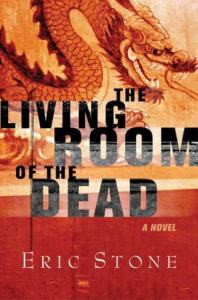 Eric Stone worked as a journalist all over Asia and lived in Hong Kong. His Ray Sharp series begins with Living Room of the Dead (2005) and is set in a more contemporary Macau. Sharp is an American journalist and sometime detective who follows the routes of the Russian female trafficking trade between the Russian Far East and Macau. The novel is based on a rather macabre and grizzly true tale of a western man who fell in love with a trafficked Russian woman in Macau, stole her away from her pimp and ended up in serious trouble in Vladivostok. Ray Sharp’s subsequent adventures take him to Shanghai, the southern Chinese boomtown of Shenzhen and down to tropical Sumatra. 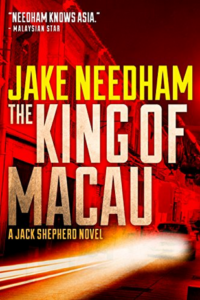 Jake Needham writes crime novels set in a whole host of Asian settings and is simply unavoidable on the shelves of every Asian airport bookshop. He’s also built a growing reputation in Europe and America via e-books. I’ve noted Needham’s Inspector Samuel Tay series before in my previous Crime and the City piece on Singapore. Needham’s other major series features Jack Shepherd, an American expat lawyer, whose wife has left him for a proctologist. Shepherd is reduced to teaching in a business school in Bangkok. In book four of the series Shepherd takes a trip to Macau. The King of Macau (2014) involves casinos, money laundering, con men, spies, gambling addicts and adventurers. It’s every trope and cliché about Macau in 300 pages and a thoroughly thrilling ride. 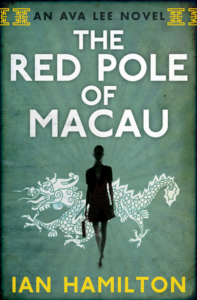 Canadian crime writer Ian Hamilton launched the Ava Lee series in 2011. Chinese-Canadian Ava is a much-traveled forensic accountant who finds herself in various points east. Her first outing, The Water Rat of Wanchai (2011) saw her touch down in Hong Kong’s infamously seedy bar strip. Several more Ava Lee books have swiftly followed and now there are ten in all, many seeing Ava head up to mainland China. But in book four of the series, The Red Pole of Macau (2012) we find Ava investigating the machinations around a multimillion-dollar real estate deal in Macau that sees her, and her family, pulled into the violent underworld of the city. Hamilton knows Macau well, and of old—in The Red Pole we get to see the city back in the days of its rather grubby old hotel casinos and Portuguese overlords which is then contrasted to the city of today—bright, glitzy yet, just below the surface, still as seedy as ever. 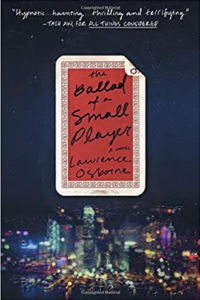 That surface glitziness brings us to a more recent and great novel about Macau that has its crime elements too. Lawrence Osborne’s The Ballad of a Small Player (2014) is the novel that reveals the Macau of today more acutely than any other so far. If Graham Greene has an heir writing today then it is Osborne. He writes about places—most recently Morocco (The Forgiven, 2013), Phnom Penh (Hunters in the Dark, 2015) and the Greek island of Hydra (Beautiful Animals, 2017)—with a detail and feel similar to Greene’s Vienna, Haiti, Saigon or Brighton.

The Ballad of a Small Player is 21st-century Macau: high rollers in private jets and tinted-window Rolls Royces ferrying mainland Chinese gamblers (mainly newly minted tech billionaires or corrupt politicians betting their ill-gotten gains) to the VIP rooms on the top floors of The Galaxy, The Venetian, or The Cotai Strip. Among the high stakes gamblers is “Lord Doyle,” an Englishman with a chequered past holed up in Macau’s casinos and hotels, gambling away his stash and slipping slowly into oblivion and bankruptcy. Lady Luck has left the building. Macau landmarks come fast and furious, lit up by the ubiquitous neon signs that signal the city—the Hotel Lisboa, the Clube Militar, Fernando’s Restaurant. Osborne is a master of atmosphere and the late night, card-obsessed miasma that envelopes the city is palpable. There are twists and turns: Lord Doyle’s fall is counteracted by China’s economic rise but he might just win it all on one throw of life’s deck of cards.

And that’s Macau—a city of casinos where Faustian bargains are made nightly by dozens of hopefuls. Just to taste that life for a few hours is what keeps the hydrofoils speeding between Hong Kong and Macau crammed with tourists, fat wallets in hand, dreaming of big jackpots. 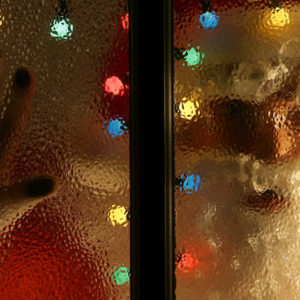