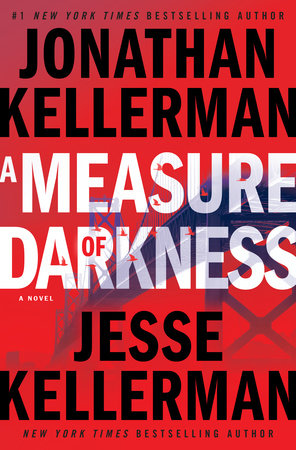 The following is an exclusive excerpt from A Measure of Darkness, by Jonathan Kellerman and Jesse Kellerman. The latest from the father/son writing duo takes us into a horrific incident that soon reveals itself to be much more than a tragic accident.

Three hours along, I stood at the staging area, talking to Detective Jeremy Bischoff of Oakland PD Homicide Section. Lanky, with sparse mousy hair and a 49ers tie, he seemed annoyed that I’d taken it upon myself to call the jail and request a full drug panel for Meredith Klaar.

“They’re supposed to do that anyway,” he said, draining his coffee.

I made vague conciliatory noises. If he wanted to stand on ceremony, I could point out that it was disrespectful of him to keep putting me off, while Jasmine Gomez continued to lie in the street. I held my tongue. I couldn’t fault him for being strung out. Everyone was.

I didn’t apologize, either. I’ve been in law enforcement long enough to know that supposed to doesn’t mean will. A ten-­minute phone call can save a lot of future headache.

I told him about Jasmine’s friend, Didi Flynn; I showed him Jasmine’s ID and said we were prepared to remove the decedent, unless he had any objections.

“Yeah, knock yourself out.”

He didn’t ask for Flynn’s number. Either he already had it or Jasmine wasn’t his priority. His mind was on the dead child.

It’s natural for a person facing a swarm of horrors to sort, compare, weigh merits.

What can wait? What can’t? How will it play with the brass? The public?

A young adult cut down is sad.

As sad as a first-­grader, bleeding out in his bed?

What about the gut-­shot, languishing on the operating table? If he didn’t make it, was that harder to accept because of the wasted effort? Or easier, because, hey: We tried.

Ten thousand people die each year in Alameda County. As Bischoff jabbed at the coffeepot plunger, tipping the pot to coax out the dregs, people were dying, elsewhere.

Ten thousand people die each year in Alameda County. As Bischoff jabbed at the coffeepot plunger, tipping the pot to coax out the dregs, people were dying, elsewhere. In hospice or at home or in an alley. In a thicket beside the freeway; in a motel room; surrounded by loved ones or alone.

How sad can you afford to be, right now?

Bischoff dumped his cup in the trash.

“I’ll let you know about the autopsy,” I said.

“Mm.” He was already walking away.

Nobody at the scene knew Jasmine Gomez. Nobody knew Didi Flynn. Or else they were lying and didn’t want to talk to me.

The lone white flip-­flop remained in the street. I bagged it, searched the area for its companion, came up empty-handed.

On days when she goes into the city to see patients, she’s out of the house by eight. Otherwise she’ll snooze. Rarely had I seen her awake this early by choice.

She hadn’t been able to get back to sleep.

I’m watching it on tv

I hesitated before responding. Was I live? Could she see me? The news helicopter was long departed. But there were still camera crews camped behind the cordon.

You forgot your vest she wrote.

To my left, shrill beeps.

A Coroner’s van was backing up to the barrier of black-­and-­whites.

The van came to a stop, and Lisa Shupfer, hair a nest, shirt bloused at one side, hopped out, frowning. She’d driven straight to the bureau from her home outside Sacramento, eighty-­odd miles on four hours’ sleep.

Couldn’t argue with that.

“Lindsey went back in her own car,” she said.

She went around to open the rear doors. Inside, on the right gurney, a small bulge, sheeted and buckled: the dead child. The victim was roughly the same age as her son. If the removal had bothered her, she gave no sign of it.

We hauled out the free gurney and wheeled it toward the tape. The uniform on duty made as if to turn us away. One way in, one way out. Shoops cut him a look and he immediately shrank back.

Inside the pop-­up, she got down to inspect the body.

I said I hadn’t performed a full exam. “Right now I just want to get her out of here.”

We placed Jasmine Gomez atop a clean set of sheets.

We wrapped her, knotted handles. Having enough room to work required that we widen the pop-­up, exposing a gap of several feet. Thinning crowds had freed up sight lines, and Amy’s text had made me leery of the camera crews. We had to keep shifting the panels to ensure that nobody had a direct view of us or what they really wanted to see.

In preparation for the lift, we crouched and took a three-­count. Always a precarious moment for me and my bum knee; more so when I’m paired with Shupfer, because of the eleven-­inch height difference between us. When we stood, I almost toppled backward, so faint was the resistance.

We laid the body on the gurney, buckled it in, wheeled it to the van.

I loaded Jasmine in beside the boy. Shupfer retrieved the
pop-­up.

“Drive safe,” she said, climbing behind the wheel.

It was six thirty-­two in the morning.

As the last coroner on scene, I went to check in with Acosta.

“You got it, brother. Merry Christmas.”

The bulk of the players along Almond Street had cleared out, leaving behind a skeleton crew. The ambulances were gone. The detectives were gone. Few onlookers remained, all but the hardest of hardcore tragedy addicts having had their fill.

Now that we’d removed Jasmine Gomez’s body, the uniforms were opening up 11th; redrawing the cordon to contain the frontage of the party house; taping off the perimeter of 1124. Dew misted windowpanes and windshields and mirrors, the eastern sky crinkling with an ambivalent dawn.

The ambulances were gone. The detectives were gone. Few onlookers remained, all but the hardest of hardcore tragedy addicts having had their fill.

On my final pass through the intersection, I detoured to hunt around for the missing flip-­flop. I knew I ought to get back to the bureau—­I owed it to my teammates—­but it was driving me batty that I couldn’t find it.

Preserving Jasmine Gomez’s property: that fell to me, didn’t it?

Say the car had struck her from behind. What trajectory would the flip-­flop follow? What about a side impact? Say she was running; she was standing still. What did a flip-­flop weigh? An ounce? It had to be close by.

I checked the bushes and the gutter.

I got down to peer beneath parked cars.

I paced the south side of 11th, craning over low, spiked iron fences.

My radio, still open to the common channel, began stuttering.

Grelling. Where the fuck are you?

The house. The big house. In the yard, all the way at the back. Sir?

He was hyperventilating, the poor bastard.

I started walking, too.

A Brief History of Cryptography in Crime Fiction 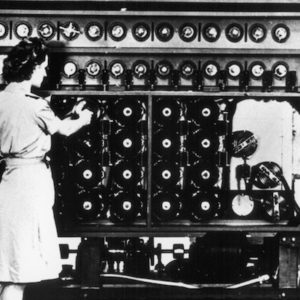 A Brief History of Cryptography in Crime Fiction Secrets are the elemental stuff of drama.  Poets, playwrights, and novelists have used them like a churning engine through...
© LitHub
Back to top