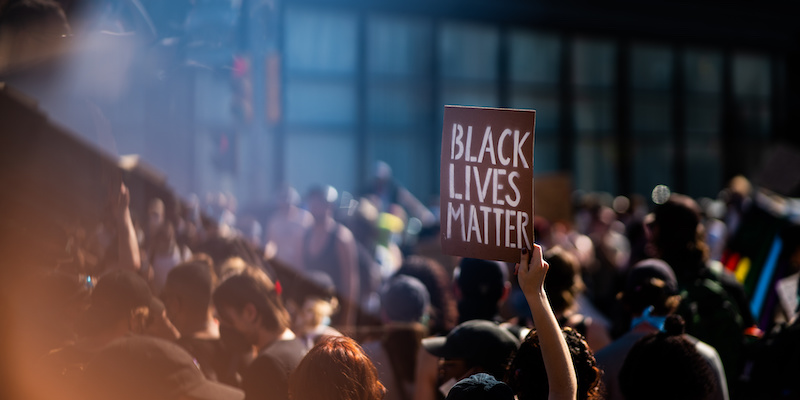 Ausma Zehanat Khan on the need to deglamorize policing in the age of Black Lives Matter.

Blackwater Falls is a book I wrote during the pandemic. It was inspired by the killing of George Floyd on May 25, 2020, and by the wave of the protests that swept the nation after his death. George Floyd was a Black man killed by a white police officer who knelt on his neck for nearly ten minutes, despite Floyd pleading for his life. That police officer, Derek Chauvin, was eventually convicted on charges of second degree murder, third degree murder and manslaughter, and sentenced to twenty-two years in prison. As a police officer, Chauvin had a record of at least seventeen misconduct complaints prior to his killing of George Floyd.

It was not the first killing of a Black person that we have seen by police officers in this country, but as Floyd’s last minutes were captured on cell phone video, it was impossible to argue mitigating circumstances for the officer’s actions, or that Floyd had somehow “earned” the manner of his death by criminal misconduct. It was also not the last police shooting of its kind. The organization Mapping Police Violence has since gone on to document that Black people, who make up 13% of the population, represented 27% of those killed by the police in 2021, the year after George Floyd’s death.

The public and unrepentant nature of Floyd’s killing sparked nationwide protests despite the lockdown, possibly the largest protest movement in American history, with protesters often met by police in riot gear. What these protests illuminated quite starkly was not only the power differential between Black and white communities, but also two deeply contrasting visions of what law enforcement in this country represents. To those immune from the threat of violence and injustice, the police represent a heroic force of protectors. To those communities who are routinely targeted and victimized by police violence, the police are illegitimate agents of the state with a monopoly on the use of force that they make use of without discretion or restraint.

As I became involved in discussions on policing in various social circles, that polarization between those who suffered from police violence and those who remained immune to it, and were therefore more likely to argue that it either didn’t exist or could be explained away by the criminality of the victims of that violence, became clearer to me, though the fault-lines did not always fall where I imagined they would.

Soon after the death of George Floyd, the Rocky Mountain Mystery Writers of America, an association I am a member of, invited a white police officer to come and speak to our group about police tactics. I protested to the organizers of the event that we shouldn’t be inviting police to speak to us, and I was graciously asked if I preferred that the event be cancelled. The RMMWA often hosts speakers from a variety of law enforcement or forensic backgrounds to assist crime novelists with their research and writing. This was the first time that I, or anyone else, as far as I know, had raised an objection to a speaker. I backed off the idea, however, of cancelling the speaker, and suggested that we read a statement in support of Black Lives Matter at the beginning of the event, and that the police officer in question be advised that she would have to handle challenging questions about police brutality from the audience.

The police officer stunned me when she responded to a question about racial profiling with the answer, “Yeah, pretty much all cops are racist, and diversity training doesn’t change that.” She went on to relay several anecdotes from her time on the police force and as a teacher at the local police college. Conversely, as I raised the same question with a group of writers of color, I argued that no MWA chapter should be inviting police officers to speak at this moment of collective racial reckoning. I was caught off guard when a Black member of our group challenged my generalization, advising me that many members of her family were serving police officers, and that they performed their jobs honorably and with distinction.

I was silent for a while after that, doing research on criminal justice reform, listening to well-known Black scholars and public intellectuals sharing ideas that ranged from abolishing the police, to shifting police budgets toward supporting mental health resources and civil infrastructure, to retraining officers, to decriminalizing offences that disproportionately funneled people of color and those of lower income backgrounds into the criminal justice system.

It was clear from this engagement that the entire criminal justice system was in need of serious reform. In other words, the monopoly of the use of the force and the institutional power structures aligned with it need to be challenged and re-imagined if communities of color are to thrive in this country. And as a crime writer specializing in police procedurals, I had to find a way to grapple with these issues in my work. It wasn’t enough to say that my police detective, Inaya Rahman, is somehow outside the system, and is thus able to critique it. Inaya is still part of that system, which requires self-examination—even self-critique—on her part, as she questions whether this is a role she can fulfil without becoming part of a deeply damaged machine.

I asked myself how I could reflect the polarization of views in this country, the power differential, and the racial profiling of communities of color in a way that illuminated the systemic problems in our criminal justice system. To make things a little easier on myself, I started with a small-town sheriff who was clearly corrupt and who, along with his deputies, terrorized immigrant workers who’d relocated to his town. I added in two lead detectives who are women of color—Inaya, an Afghan-Pakistani Muslim, Catalina Hernandez, a Latina, as well as their boss, Lieutenant Waqas Seif, a man of color, though one who had disavowed his heritage and faith. These few characters make up my Community Response Unit—tasked with handling complaints about police interactions with minority communities. But I had to go further to examine the question of police violence and the need for criminal justice reform. So I developed a character outside the police—civil rights attorney, Areesha Adams, a Black woman—who holds the police accountable. Areesha’s presence in my series allowed to continually challenge the actions of my detectives, and to explore whether three female investigators could build bonds of solidarity despite the very large elephant in the room: they’re not on the same side.

That isn’t a question that’s answered in Blackwater Falls, though I approach the beginnings of an answer. As a friend once told me, “Solidarity can’t be assumed. It has to be earned.” So in my first book in the series, I put Inaya and Catalina through their paces in earning that solidarity by seeing the Blackwater sheriff’s department not just through their own eyes as police officers, but also from the perspective of Black and other minority communities those police officers have terrorized.

More importantly, to get to the question of whose lives really matter, my book opens with the murder of a white-skinned refugee from Syria named Razan. Razan is pinned to the door of the local mosque, and the political ramifications of the murder—the optics of it—mean that the murder garners first local, then national attention. Police resources are instantly made available to bring the killer to justice. However, as my detectives investigate Razan’s murder, they soon realize that few police resources have been devoted to investigating the disappearances of young Black girls from the same community. Areesha Adams is there not only to point out this glaring disparity, but also to demand accountability.

Nearly every character in Blackwater Falls has a relationship with law enforcement, whether it reflects security, fear, entitlement, prejudice, or simply the privilege of indifference. Lieutenant Waqas Seif believes he’s a decent man doing an important job. Inaya and Catalina believe the same about themselves otherwise they wouldn’t have joined the Community Response Unit—they represent the point of view of working within a system to change it, despite the fact that Inaya has come to the CRU from a background as a lawyer who holds police officers like Derek Chauvin accountable. Catalina’s background is even more challenging: she’s long challenged the untrammeled power of ICE and Border Patrol officers in her work with undocumented members of Latinx communities.

In other words, Inaya and Catalina are at the ground zero of debates around policing. As characters, they give life to those debates, particularly as they interact with white officers who believe themselves to be free of prejudice, and find it difficult to acknowledge in other officers, no matter how blatant the actions of those officers might be.

My characters know the system is fallible, and that this is a problem of more than just a “few bad apples”, asking why legitimate peaceful protest is so often met with a near-militarized response that perpetuates a cycle of violence.

This is where my series begins its exploration, but I hope it’s only the beginning. Much more has to be done to challenge systemic injustice, not just in my books, but also in real life. Deglamorizing policing and holding it accountable as a writer is a step in this direction. 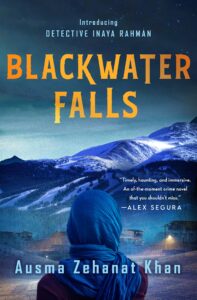 Ausma Zehanat Khan is the author of A Dangerous Crossing, the fourth of the Rachel Getty and Esa Khattak Novels. She holds a Ph.D. in International Human Rights Law and is a former adjunct law professor. She was Editor-in-Chief of Muslim Girl magazine, the first magazine targeted to young Muslim women. A British-born Canadian, Khan now lives in Colorado with her husband.
http://www.ausmazehanatkhan.com/bio.html 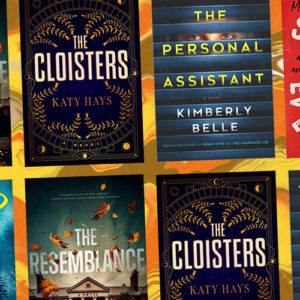 The job du jour in thrillers is the influencer, an unfortunate but accurate reflection of life. Time was a beautiful, fashionable...
© LitHub
Back to top