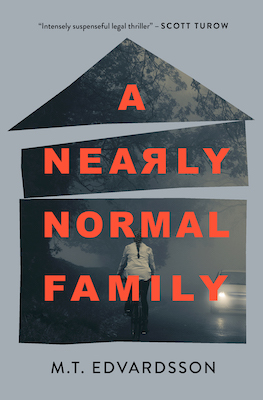 The following is an exclusive excerpt from A Nearly Normal Family, the latest legal thriller from Sweden’s M.T. Edvardsson. When a 17-year-old girl is accused of murdering a shady businessman twice her age, her upstanding parents must take a hard look at their own lives and their daughter’s secrets, while learning just how far they’ll go to protect one of their own.

Agnes Thelin almost looked apologetic when she explained I was a suspect. My thoughts were like a whirlwind. A suspect? I sank back in my chair and tried to collect myself.

I was still dazed a little while later, when the attorney marched in and demanded to speak to me in private.

“We’re going to figure this out,” he said, placing his left hand on my shoulder as he squeezed my right hand. “Don’t worry.”

His hand was large and sticky and he looked like a cross between Tony Soprano and Tom Jones. The size of a bear, tan, gold chains around his neck and wrist. A pigeon-blue shirt with the top three buttons undone. The type of man who drives his SUV all the way to his single-family home even though the neighborhood is supposed to be car free. Who has a grill the size of a camper in the backyard and thinks everything was better when he was young, even though he doesn’t feel a day over twenty-three. I’m sure he was high up on the divorced young moms’ fuck lists.

“So this is what you look like?” I said.

“I didn’t quite remember.”

“Have we met before?” the attorney asked.

A light went on in his head.

“Stella Sandell. I should have realized. Ulrika’s daughter?” I nodded.

“This’ll be quick,” he said. “They have nothing on you. Some cops nowadays have awfully itchy fingers. They have their homicide guidebook and stuff to follow. They think the first few hours are totally crucial so they haul in the first best option, for better or for worse.”

He sat down, his legs spread wide, and placed his large hands on his kneecaps.

“But they must have something,” I said. “They said there was some witness who pointed me out in a photo.”

“She can hardly be called a witness. Some silly girl who claims she saw you from a window. In the dark! And she’s one hundred percent certain it was you, even though she doesn’t know you. No, that’s not much of a witness.”

I could picture her in my mind. A shady figure in a window on the second floor. Was that really all they had? Was that the only reason I was sitting there?

“They want to continue questioning you as soon as possible,” said Blomberg. “You’re lucky. Agnes Thelin is one of the most sensible people in this place. Good to talk to.”

He stood up and messed with his phone a little, holding it half a centimeter from his nose. Apparently the thought of wearing glasses made him feel old or ugly, or maybe both.

“Forgot my contacts,” he mumbled.

My legs felt like overcooked spaghetti when I stood up. The attorney walked ahead of me to the door.

“So what am I supposed to say?”

Blomberg turned around so fast his hair fell down across one eye.

“What should I tell the police?”

He looked at me, slowly, up and down, until I pulled my cardigan over my chest. I felt like a show cat. The attorney brought his hand to his forehead and stroked away both hair and sweat.

“Is that all you’ve got? Tell it like it was. That’s your strategy?”

“What are you talking about?”

“You’re supposed to be one of these big-shot lawyers,” I said. “Haven’t you won a bunch of major cases? Didn’t you have a better strategy those times either?”

Blomberg threw up his hands.

“What do you want, exactly?”

I had managed to arouse some uncertainty in him. Some philosopher once said that knowledge is power. That is definitely true. Other people’s ignorance is also a powerful factor.

Blomberg had transformed completely. He had come marching in here like an alpha male straight out of the tanning bed. Now he looked like nothing but a pale little boy.

I thought of Dad’s motto, how lying is a rare skill. Did Blomberg share that belief?

“Why would you have done something like that?” he wondered.

It was, of course, a good question.

From A NEARLY NORMAL FAMILY. Used with the permission of the publisher, Celadon Books. Copyright © 2019 by M. T. Edvardsson.

A Lady’s Guide to Gossip and Murder 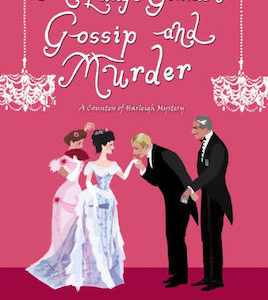 A Lady’s Guide to Gossip and Murder Murdered? I snatched the newspaper from Hetty’s hands and spread it on my lap. “Show me where you read this.” Hetty...
© LitHub
Back to top