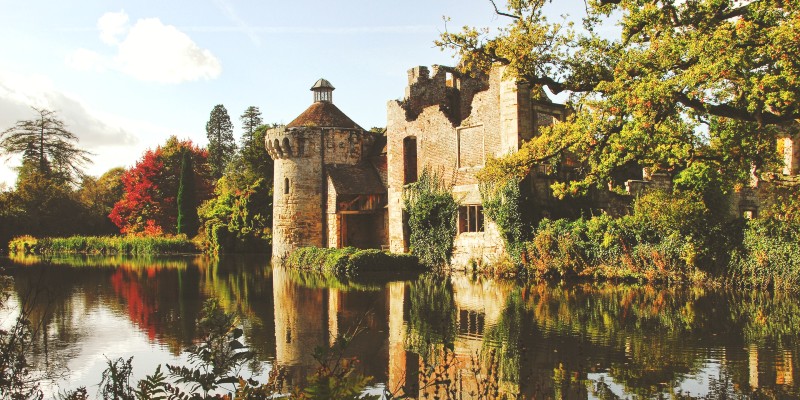 S.D. Sykes explains why writers are drawn to the English countryside and its medieval history.

As a writer, I’m often asked about where my ideas come from – and it can be a difficult question to answer. In truth, I find my ideas in everything and everywhere. In fact, I can’t stop ideas from popping into my imagination on a continual basis. You see, I’m hard-wired to see the world through the prism of stories. I find inspiration in many places—whether it be from an article in a newspaper, a photograph, a family secret or an overheard conversation. But, if I had to pick one answer to this question, then I would say that my inspiration comes most powerfully from my environment—my home village and the surrounding countryside, in a rural and rather forgotten corner of Kent, England. It is by virtue of living in this area for more than a decade, that I have felt inspired to write five murder mysteries that are all set around and about my home village, in the middle decades of the fourteenth century. 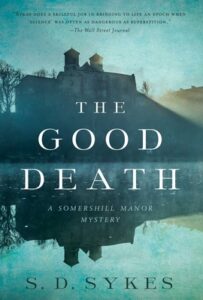 Knowing this you might ask—why the fourteenth century? Why not write a contemporary crime novel set in this area—and my answer is this. You can’t ignore the past in this part of England. It is evident in every street, lane, field, hedgerow and twist of the river. I noticed it immediately when I first moved here in 2007.  Previously I had lived in a former mill town in the north of England. This was a landscape characterized by chimneys, canals, and enormous, often derelict factories. But when I came to this part of Kent, it was as if the Industrial Revolution had never happened.  I found this odd at first, and then intriguing. Why is this area one of the ‘best preserved medieval landscapes in northern Europe’, according to the government body, Natural England? Because there’s no doubting that this is true.

My village retains many of the attributes of a village at the heart of a feudal manor. It is a small settlement, built around a Norman church on the top of a hill. The high street twists about the church yard, and is lined with wooden-framed houses and shops, many of which date from the 14th and 15th centuries. Their warped beams and overhanging jetties are still visible, even though the houses themselves have been modernized and extended over the years.  The countryside about the village is dotted with small farm settlements, moated castles, sunken paths and ancient, coppiced woodlands. There is some evidence of the Hop-growing industry that comes after the fourteenth century, but otherwise this place has retained its medieval bones.

I can’t exactly say why this landscape has changed so very little in the last seven hundred years. It probably has something to do with the geography of the area, and its unsuitability for industrial manufacturing. The upland forests have traditionally been difficult to traverse, whereas the lowland fields are highly productive, enjoying the fertile soil conditions and the favourable climate that produces much of the British fruit harvest. Historically, this is an area of wealthy farmers and land owners, who were, perhaps unwilling to sell their profitable farms for industrial uses? Or perhaps it is just that these wealthy people didn’t want the grubbiness of industry on their doorstep? Whatever is the case, this lack of a modern impact on the landscape means that it’s entirely possible for me to take a walk and feel that I am in the fourteenth century. Of course, there is a leap of imagination involved, but it is smaller than you might think.

But where was the requisite darkness in this landscape? Because every crime writer needs to perceive something nasty lurking beneath the surface of their chosen location. Some nook and cranny with the right conditions for a murder mystery to seed and grow. On the face of it, you might call my home an idyll— largely untouched by the hand of modern man—but there is another side to all this bucolic loveliness. Something that I sniffed out fairly quickly—because there is little more gothic, (by which I mean the suggestion of gloom and horror) than the genuine gothic. If I visit one of the three medieval churches within walking distance of my house, then I am not looking up at gargoyles from the Victorian gothic revival period—I am looking at the grotesque, leering faces of demonic creatures, carved from the imagination of a medieval stonemason himself. I am telegraphed immediately back seven hundred years to the mindset of those times, when superstition and irrational beliefs abounded. When people believed that such gargoyles were either personifications of evil, or had the power to ward away bad spirits.

Likewise, if I visit one of the many ancient farmhouses or pubs in this area, then I am immediately struck by the intrinsic, gothic spookiness of the architecture. These are buildings that have almost grown out of the soil, only to have warped and twisted with time. I’m drawn to their oddness—their organic, contorted lines, small doors and sloping floorboards—unable to stop myself from imagining ghosts in the many shadows. There is also something delightfully creepy about a building that has been continuously occupied for more than six or seven hundred years. As a writer, I can’t help but think about all the people that have lived under those roofs. Their births, marriages, …. and, of course, their deaths.

But there is more to the suggestion of darkness in this place than simply the architecture. There is the history—and in particular those middle decades of the fourteenth century that I have chosen to write about. Between 1348 and 1350, Europe suffered one of its worst humanitarian disasters ever. Sometimes called the Bubonic Plague. Sometimes called the Black Death. In England alone, this disease killed up to half of the population. In some rural communities, such as my own, the death toll reached nearly 70%.  There is a church on the other side of my valley that was once surrounded by a whole village. Most of those homes were abandoned and subsequently demolished after the Black Death, and the church now sits on its own, with just a few lonely buildings to one side. This phenomenon happened all over the country, as evidenced by the multitude of ‘DMVs’ that now exist. For those who are not familiar with those initials, they stand for ‘Deserted Medieval Villages’. And there are more than 3000 of them across England, most abandoned after the devastations of this plague.

I should also say that there is, of course, a rather ghoulish, gothic side to any story about plague, but what has interested me more as a writer, has been the aftermath of this disaster. The post-plague years were a time of enormous change for England. And we writers are drawn to such periods in history, when a sudden end to the status-quo can give rise to all sorts of narrative possibilities. The oppressed, rise. The great, fall. Opportunists strike, as the world fights to establish a new societal order. There is often a violent struggle for control.

This is exactly what happened in the aftermath of the Black Death. Those peasants who were lucky enough to survive the Plague, suddenly found their labour was in great demand. As a result, they were able to command much higher wages than ever before. They became more mobile and confident in their newly–found power, inspired to join together, and rise up against the aristocracy, demanding that ‘all men should be free and equal’ in the Peasant’s Revolt of 1381.

These rebels may have been mercilessly quashed by King Richard II, but ultimately this boy-king could not stop the changes that were already taking place—changes that had profound and long-term consequences for English society. Thanks to the Black Death, the first important blow had been struck into the face of feudalism, the system of control that had governed the English since the Norman invasion of 1066. Equally significant for British history (and perhaps even world history?) was the fact that this period saw the first whispers of dissent against the Catholic church. These whispers came from the poorer echelons of society—those who were disillusioned with the apparent corruptions of the clergy and who saw the Plague as a punishment from God. It may have taken another a hundred and eighty years for Henry VIII to finally break with Rome, but the roots of the Reformation go back to those post-plague years. As such, this period was just too irresistible for me to ignore.

In fact, I would challenge anybody who visits my home—not just those who like to write stories—not to come away with some abiding sense of the history. Having said that, this part of Kent is not an historical theme park. People live and work in this landscape, proud of its past, but conducting very modern lives. But it is a spyglass into the medieval. Perhaps the best that we have in England, and I just couldn’t resist its lure.

S. D. Sykes is the author of Plague Land, The Butcher Bird, City of Masks, and The Bone Fire, all available from Pegasus Crime. She lives in England. Her new novel, The Good Death, is now available. 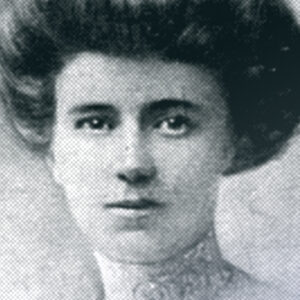 “Few suspected women of spying, and certainly no one expected a middle-aged knitter to be surreptitiously gather­ing intelligence.”...
© LitHub
Back to top