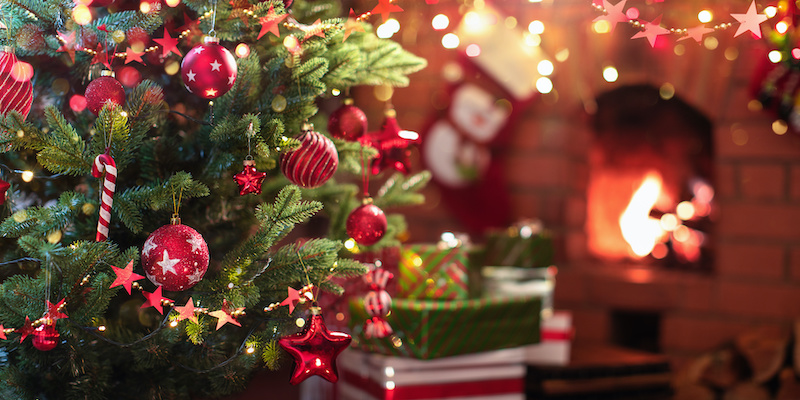 Carolyn Haines, David Rosenfelt, and Donna Andrews on capturing the charms of the coziest season.

What goes into writing a Holiday-themed mystery? We brought together three mystery masters who between them have written at least eighteen Christmas whodunits. The writers chiming in on this Christmas crime-novel confab are Carolyn Haines, most recently author of Bones of Holly, the new book in her Sarah Booth Delaney series; David Rosenfelt, who’s novel Santa’s Little Yelpers is the sixth X-mas mystery in his long-running Andy Carpenter series; and Donna Andrews, who has has written several holiday mysteries featuring her amateur sleuth Meg Langslow, most recently Dashing Through the Snowbirds. 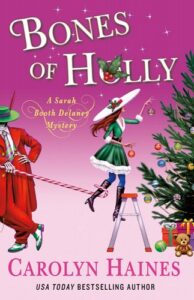 Carolyn Haines: I’ll start us off by throwing a writing question out there: What are some of the special considerations when writing a Christmas-themed mystery, and do you find them confining or do they help with the writing?

David Rosenfelt: I don’t find the stories taking place around Christmas to be confining at all. It’s just a setting and in that sense has no significant impact on the plot. But it’s definitely a positive in that people love everything about the season. Of course my character, Andy Carpenter, is a curmudgeon who gets tired of Christmas music after about twenty minutes, and who would rather have a root canal than decorate a tree. I wonder who he gets that from…?

Donna Andrews: For me, it’s much the same considerations I have to keep in mind when doing a regular mystery–only more so. Since I’m writing toward the cozier end of the spectrum, it’s always a balancing act, taking the relatively friendly, quiet, and peaceful community my series characters inhabit . . . and then rudely inserting a murder. Never a particularly gory or graphic murder of course! But still, the murder has to be real enough and the stakes high enough for my readers to care that Meg, my protagonist has to solve the crime.  And I think in a Christmas mystery, readers expect us to up the heartwarming quotient a bit. Our sleuths not only have to solve the crime and survive whatever perils the villain has in mind for them–they have to do so without losing even a bit of their holiday spirit.

Curiously, I don’t find doing a Christmas book confining, any more than a poet writing sonnets or haiku finds those rather exacting forms confining. The hardest thing, most times, is coming up with a perfect title. These days my titles usually need to have a pun involving birds, and at least some suggestion that it’s a crime novel. When you add in the requirement for the Christmas book that it also has to suggest the holiday in some way–that’s tough! But so far, we’ve always managed it–and I say we because the editorial team at Minotaur is great at helping me brainstorm the titles.

But all this brings up another question: Why do you think readers like holiday mysteries so much? Because clearly they do.

CH: I love reading holiday mysteries and learning about the traditions of authors and their fictional characters. There is still magic in the holidays, and I think the world needs a lot more magic.

Because I now run an animal rescue in my home, I don’t decorate for Christmas anymore. Trimming the tree was always such a highlight of the season. We had a huge tree that scented the house with cedar. Baking fruitcakes (mine really are very tasty!) and making candies and cookies to give away are still traditions I cling to. I miss those days of singing carols and working with my mother in the kitchen. Now, I bake doggie cookies and kitty treats and the house is always “trimmed” with dog and cat hair. 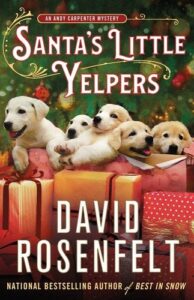 DR: I think part of the reason holiday mysteries are so appealing is that they come out before the holidays. People look forward to the holiday season, and any chance they have to experience it in advance is welcome. Drawing on my experience in the movie business, I can tell you that if we released a Christmas-themed movie in November or early December, it would do well until the day after Christmas, and then the grosses would fall off a cliff. Holiday mysteries take advantage of that feeling of anticipation.

Or maybe not…I have no idea.

DA: I think people who read mysteries from the cozier end of the genre don’t just read to see the sleuth solve a crime–they also want to immerse themselves in a community and get to know an appealing or at least intriguing cast of characters. And holidays bring out so much more of what’s good and bad in all of us–that makes it even more interesting.

But it could also be because holiday mysteries–and lighter, humorous mysteries in general– are often feel-good experiences.  A lot of readers want that kind of experience during times of stress–I can’t count how many readers have told me that being able to escape to the fictitious town of Caerphilly through my books has helped keep them sane during the pandemic. And no matter how much we love them, holidays can also be stressful–so what better way to soothe the holiday stress than to escape into a holiday mystery. If nothing else, most of us rarely find corpses under our Christmas trees.

DR: Here’s a Christmas experience from my movie past which unfortunately taught me something about the feelings people have for Christmas. I was in charge of marketing for a studio, Tri-Star Pictures, and we had a horror movie called “Silent Night, Deadly Night”. Let’s just say it wasn’t an art film. The slasher/killer dressed up as Santa Claus when he performed his ‘work’. It literally caused national outrage, and because I was the person the media came to, I was castigated. One columnist who I did a phone interview with described me as having ’sneered’ as I spoke…not sure how he knew that. People have a love for everything ‘Christmas’, especially Santa Claus. They could not accept our maligning him, even though on some level they probably know that Santa is not real.

Carolyn’s mention of traditions makes me curious if either of you have brought holiday traditions or experiences from your own life into the books.

CH: As a child, Christmas was a magical time for me. Now, as an adult living in an animal rescue at my farm, I don’t decorate. With the books, I get to live vicariously through Sarah Booth and the Zinnia gang. IN BONES OF HOLLY, Sarah Booth and Tinkie are judges for the Bay St.Louis Library Christmas tree competition. (I have done this in real life and it is spectacular!) Two warring writers are also judges–and when Sandra O’Day and her assistant disappear from her gala, Sarah Booth and Tinkie are on the case. I try to keep the stories focused on humorous events while still crafting a compelling mystery. But I do limit the number of dead bodies in deference to the season. 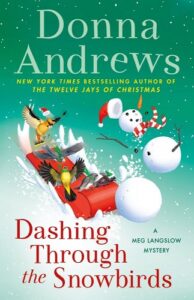 DA: I’ve done it wherever possible!

For example, in my family, Mom did all the Christmas planning and decorating and especially the gift shopping. She knew if she left it to Dad it wouldn’t happen. And I well remember one year when she asked Dad if he wanted to see what he was giving her for Christmas, or if he’d rather be surprised. Which led to a passage in Dashing Through the Snowbirds, this year’s Christmas book, in which Meg, speaking of her dad, says “ever since my high school days, he almost always recruited me to pick out Christmas, birthday, and anniversary presents for Mother. Usually by the time I’d done enough research to select something she was sure to like, she had already figured out what she was getting. But since I was under orders not to tell Dad what he was giving her, lest he accidentally spill the beans, at least someone was always delightfully surprised.”

Although I do remember the year Dad actually did put a package under the Christmas tree. As an avid gardener, he tended to spend cold fall and winter days studying the latest garden catalogs and placing his seed orders. One year a package of seeds arrived in mid-December–so he put it under the Christmas tree and opened it on Christmas morning with almost as much delight as if the contents were a surprise. And maybe they were–he was, quite literally, an absent-minded professor.  Maybe I should have Meg’s dad do that in the next Christmas book.

I also need to check and see if I’ve ever had Meg’s dad play Santa Claus in the way my own grandfather did.  He’d get up on the roof in the middle of the night–and this was a huge, two-and-a-half story house–and stomp around while shaking a string of sleigh bells, all for the amusement of any grandchildren who were still awake.

But I also try occasionally to work in traditions from other people’s families. Or other cultures. Including other winterish holidays, like Hanukkah, Kwanzaa, Diwali, Chinese New Year, Winter Solstice–you name it. I figure Caerphilly may be a tiny rural town, but it has a large and top-notch college in town, so it’s probably a lot more interestingly diverse than the typical small town.

CH: I love writing the Christmas stories because it allows me to indulge in my memories of wonderful Christmas shenanigans from the past.

The last time I judged the Christmas tree competition for the Bay St. Louis Library, I stayed at a lovely bed and breakfast on the bay. My friend and I decided to take a walk down Main Street on the beautiful December night. It was late and the restaurants were closed. We came upon a barbecue place at the end of town with a giant pig out front. As a horsewoman, I couldn’t resist. I climbed aboard the pig and waved my red Christmas scarf in the air. In BONES OF HOLLY, Sarah Booth does this same stunt–with humorous results. We are using this photo for the author photo in the book. As you can clearly see I have no sense of self-preservation since I am documenting this episode. 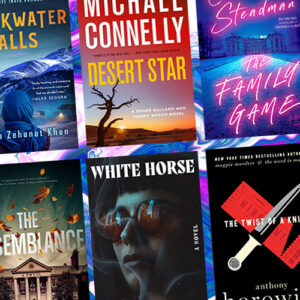