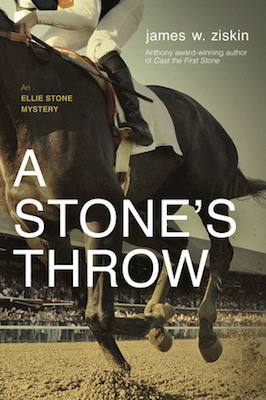 The following is an exclusive excerpt from A Stone’s Throw, by James W. Ziskin, the latest in his Ellie Stone mystery series, set in the mid-60s. In the following passage, reporter Ellie Stone goes to the racegrounds to look into the strange disappearance of a jockey.

It was raining steadily, and my escort was otherwise occupied, so I sat on a bench inside the grandstand. I picked up a discarded copy of the Albany paper, and, curious, I glanced at the previous day’s race results. The last race had indeed been won by Wham’s Dram, with Johnny Dornan aboard. There was no information in the paper about the jockey’s colors, but a photograph showed the smiling rider in diamond silks atop Wham’s Dram in the winner’s circle. Could have been orange and black. I had no reason to doubt Fadge’s expertise when it came to the attire of jockeys. And I had to admit that pattern looked quite similar to the piece of fabric I’d found in the ashes at Tempesta Farm. Impossible to say for sure in black and white, but the likelihood of Johnny Dornan climbing up into the saddle ever again was growing dimmer by the minute.

The rain let up enough that I could enjoy the parade at the paddock with my camera at the ready. I stood on the other side of the rail fence, mere feet away from the horses. Led by grooms around the enclosed circle, the animals passed, steaming in the cool, wet air, and I snapped photos of each. Leisurely, with graceful—almost indolent—strides, the Thorough­breds sauntered through the mud as a few devotees studied them alongside me. I overheard some conversations and comments, men in drenched sport coats or leisurewear discussing quality and quantity of sweat—who could distinguish sweat from rain?—and temperament as they related to readi­ness to run. The serious horsemen, however, the ones who projected com­petence and knowledge, said little or nothing. They simply watched with a steady gaze. Some were well-dressed cosmopolitan types, while others looked like professional gamblers, humble but on top of their game. The rest, the hobbyists, pretenders, and admirers, made glib observations about form, breeding, and personality, as if they had the dope directly from the horses’ mouths.

Impossible to say for sure in black and white, but the likelihood of Johnny Dornan climbing up into the saddle ever again was growing dimmer by the minute.

A couple of ladies in fancy hats to my right admired the beauty of a roan’s coat until the poor horse—being a horse after all—answered nature’s call not ten feet in front of them. They waved their gloved hands in front of their pinched noses and beat a hasty retreat to the clubhouse. Two heavyset men chewing soaking wet cigars pronounced the excretion a sure indication that the horse would fly to victory as a result of his less­ened weight. They used a word I don’t favor. Armed with this valuable new intelligence, they sprinted off to the betting window to wager their all on the regular roan. None of the pros seemed excited by what they must have seen thousands of times.

A magnificent, shimmering black beast rounded the turn and edged close to the fence rails where I was leaning with my camera. He threw back his head and snorted. The bit clattered against his teeth, and then he nickered in my general direction. Fixing me with his right eye, the horse made it clear that he was aware of my attentions. More than a hint of self-consciousness. Animals sometimes exhibit shyness, after all. I clicked two frames of his glorious face, and he perked up, as if he knew what a camera was for. Or that he was a handsome boy.

“He says hi, miss,” said the young groom escorting him. I smiled. “Hello to him. What’s his name?”

The horse passed and continued on his leisurely round. Then I noticed his racing colors. Black-and-orange diamonds.

“Excuse me,” I asked, chasing after the groom. “Is he from Harlequin Stables?”

The groom whispered that he wasn’t supposed to talk to anyone while walking the horses. “I shouldn’t have said nothing at all before.”

“Look at your program,” he said out of the side of his mouth.

I shrugged and checked the race card. Purgatorio was indeed an issue of Harlequin Stables.

“You couldn’t have just said yes?” I called to the groom.

He made a great show of acknowledging three men about twenty yards ahead to my right. One was a jockey in black-and-orange-diamond livery. The other two were dressed in street clothes. The man in charge—the one on the receiving end of the others’ deference—was a drooping, gray man in an ill-fitting suit. And though he was heavyset, it appeared he’d recently lost some weight; at least that was the impression given by his luffing trousers, belted high on his belly, and the billowing jacket draped over his narrow shoulders. He looked to be about sixty-five or seventy. The third man in the parley, about twenty years younger than the boss, was dressed modestly in off-the-rack slacks, a light jacket, and a well-worn cap. He stood a step or two back from the jockey and the man in charge without saying a word.

The boss barely acknowledged the groom, and then only with a vague nod. He turned his attention instead to the horse. With intense focus, he examined Purgatorio as a physician might a patient. Or perhaps an artist sizing up a would-be model. The horse and groom passed, and, for a long moment, I watched the three men. The jockey noticed me and alerted the man in charge by motioning in my direction. They turned, regarded me briefly, then took a few steps away from the paddock and my scrutiny.

I rewound my film and loaded a new roll.

“That’s the owner,” came a voice over my shoulder. Fadge. “His name’s Louis Fleischman. And the jockey is Nick Blakely. Not a rider I’d pick for any horse of mine.”

“What if your regular jockey were AWOL?” I asked.

“Scratched from every race today. Who’s the other guy?”

I clicked two frames of his glorious face, and he perked up, as if he knew what a camera was for. Or that he was a handsome boy.

“I doubt it. He’s not paying attention to the horse.”

“Excuse me, Mr. Fleischman,” I called out to the one Fadge had identified as the owner. “May I ask you a question?”

He seemed annoyed by the interruption but was decent enough to ask what I wanted.

“I’m with the press,” I said, approaching and showing my card. Fadge followed a discreet distance behind. “Eleonora Stone from the New Holland Republic.”

He peered at my credential from several feet away, then threw a silent glance to his companions. “What can I do for you?”

“You’re Louis Fleischman, aren’t you? The owner of Harlequin Stables?”

He peered at Fadge standing behind me, surely wondering why I needed a three-hundred-pound bodyguard.

“Can you tell me where he is? Why he was scratched from every race on today’s card?”

His expression darkened. He said the jockey was sick.

“So he’ll be back tomorrow?” I asked.

Fadge leaned in and whispered in my ear that there were no races on Sunday.

“I mean Monday,” I corrected.

“Can you tell me where he’s staying here in Saratoga?”

“Why the interest in Johnny Dornan?” he asked, all the while eyeing Fadge.

“A piece of your stable’s racing silks was found this morning on Tempesta Farm.”

“Tempesta? I thought they shut down years ago.”

“They did. It’s abandoned. And now they’re down one barn, too. It burned to the ground before dawn. Took two bodies with it, and one of them was wearing Harlequin livery. Do you have any comment?”

“Look, miss. I’ve got a horse in the next race and don’t have time for some girl reporter.”

He stared at me for a long moment, his expression difficult to read. “I don’t know anything about that,” he said. “Look, miss. I’ve got a horse in the next race and don’t have time for some girl reporter.”

Fadge pushed past me. “Hey, pal, talk nice to the lady, or I’ll give you a lesson in manners.”

Fleischman backed away. The third man stepped forward. I knew Fadge to be a sweetheart but also a hothead with a short fuse. He was double extra-large, quite strong, and ferociously protective of me. A quick assessment of the comparative ages and health of the men convinced me that my hero would have little trouble pounding Louis Fleischman, the jockey, and even the third man into a flattened blob of Play-Doh.

I grazed Fadge’s arm with my fingers, stopping him in his tracks. Over time, we’d come to share an unspoken communication, he and I. An intu­itive understanding of what the other wanted with nothing more than the subtlest of nods, blinks, or pursed lips to go by. He turned to me and, without a word, knew I was signaling that I was up to the challenge. There were times when I welcomed his brutish strength, but, in general, I preferred to fight my own battles. At least until fists flew.

“I didn’t mean anything by it, young man,” said Fleischman. “Apologies to the lady.”

Fadge stared him down for a couple of beats before nodding his approval. He stepped aside, and I reemerged from his imposing penumbra into the light of the sun. I exaggerate, of course; the day was quite gray after all. But if Fleischman thought I’d let go of the bone, he was mistaken. I repeated my request for a comment about the Harlequin racing silks found around the neck of a dead man.

Fleischman ran a hand through his thin, gray hair. Then he forced a weak smile at me. “Sorry, miss. I’ve got some business to attend to. But why don’t you have a chat with Carl, here?” He indicated the man in the cap. The one who hadn’t said a word. “Carl, how’s about you take the young lady to the bar in the clubhouse? Put everything on my tab.”

Carl remained rooted to his spot.

I glanced at Fadge, my eyes soliciting a thumbs-up or thumbs-down from him.

“He seems harmless. I’ll catch up with you later.”

A drink sounded pretty good to me. “Hello, Carl,” I said. “My name is Ellie.”

From A Stone’s Throw: An Ellie Stone Mystery. Used with the permission of the publisher, Seventh Street Books. Copyright © 2018 by James W. Ziskin. 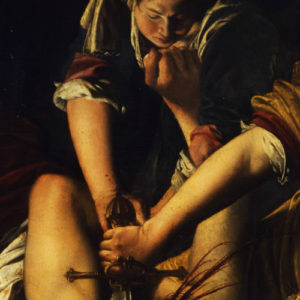 A Baroque Painter’s Feminist Rage (and Blood Spatter) For the past three decades, you couldn’t throw a stone into literary and cinema circles without hitting an adaptation of Artemisia...
© LitHub
Back to top