The Transcendent Violence of Artemisia Gentileschi

For the past three decades, you couldn’t throw a stone into literary and cinema circles without hitting an adaptation of Artemisia Gentileschi’s life, although none have been as successful at expressing the 17th-century Italian Baroque painter as her own radiant paintings. #MeToo will no doubt prompt another wave of interest in Artemisia Gentileschi, a young, powerless woman who publicly named her attacker, her painting tutor, and suffered the consequences. Yet the ongoing controversy over a recent Baroque discovery also sheds new light on Gentileschi’s particular artistic triumph, and why she should be remembered for more than just her biography.

Born in Caravaggio’s Rome in 1593, the talented daughter of an artist father, Artemisia Gentileschi learned how to mix colors, draw, and paint in her father’s studio. Here she is in a later self-portrait: Light floods her high forehead; she is intense, lovely, focused. Yet she also visibly labors. Her dark hair falls loose, tangled by sweat. Both arms are tensed, and the arm holding a paintbrush looks like it could just as easily cock a spear. 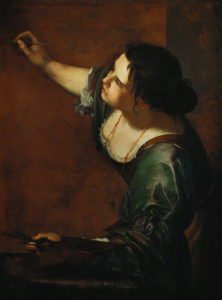 Long before Gentileschi became this mature, fearless figure, her father noticed his teenage daughter’s desire to grow as an artist and hired an up-and-coming star, Agostino Tassi, to give her lessons. In 1611, Tassi raped Artemisia Gentileschi, a virgin. Records of the subsequent court case survive, the details graphic. Tassi tricked the young woman into his room, made unwanted offers of sex, and then threw Gentileschi on the bed, kneeing her thighs apart. She fought him off. “I scratched his face,” she told the court, “and pulled his hair and, before he penetrated me again, I grasped his penis so tight that I even removed a piece of flesh.” She also ran for a knife to stab him, but ultimately failed in the attempt to defend herself.

When Tassi did not marry Gentileschi, as was the protocol of the time, her father sued. Tassi’s trial lasted seven months. Gentileschi was publically tortured by thumbscrews to verify the truth of her testimony. The court exiled the rapist from Rome but never enforced the sentence.

During the year of her attack and trial, Gentileschi started her first violent, bloody painting of Judith, the Old Testament heroine, beheading Holofernes, general of the Assyrian army that besieged her city. Judith was a favorite subject of the era—a kind of militant proto-Mary figure who appealed to audiences for her boldness and power. To save her people during the siege, Judith donned her best clothes, fixed her hair, walked with her maidservant into the enemy camp, and secured an invitation to dine with the general, who found Judith immeasurably beautiful. She got him drunk and hacked off his head with a sword. Her maidservant helped her to haul the prize secretly back to camp, where they hung it on their wall. The enemy fled when they woke to the news. Judith had won for her people.

Gentileschi’s first Judith is so arresting in its composition—the way it showcases the brute force of the two women subduing a powerful man—that the discussion of composition often overshadows other dazzling attributes of Gentileschi’s work. The poses are unforgettable, and atypical for Gentileschi’s time. While other Baroque-era Judiths sideline the heroine’s maidservant to a dubious onlooker, the strong red-cloaked arms of Gentileschi’s servant plunge straight down from the painting’s peak. She pins the general, making it possible for Judith to grab his head and slice her sword through his neck. It’s still hard work. One woman is not enough, Gentileschi’s painting, appears to say. These two did it together. 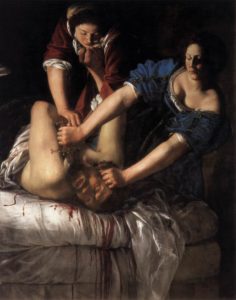 Compare this composition to Caravaggio’s famous first Judith, and you can immediately spot the difference in the figures. First, there’s no real physical struggle. Caravaggio’s Judith flexes all the muscle of someone wrestling an unruly kitten and wears a delicate frown. The maidservant—old, hawkish, and nearly bald—regards the beheading with a kind of disappointed satisfaction, as if she had long ago predicted that homicide would be this disgusting. Neither woman plays the ruthless war hero. In fact the most menacing aspects of the painting are the thick, falling red drapes and the blood that spurts like some kind of multi-forked alien tongue from Holofernes’s throat. 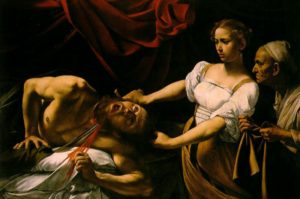 If Gentileschi and Caravaggio had each only made one Judith, the conversation could stay here a while, comparing the marvelous disparity between making the relationship between women the subject of a painting’s narrative instead of its byproduct. Just ask yourself the question: Could you crop the maidservant from Caravaggio’s painting and still have a story? Yes. Could you crop her from Gentileschi’s? Absolutely not. This fundamental difference in composition is one of the reasons that Gentileschi’s art endures. But it is not the only reason.

Caravaggio’s first Judith is in Rome. The second was lost to time, perhaps, until 2014, when the owners of a house in Toulouse, France, went to fix a leak in their ceiling and found a well-preserved, large-scale Baroque depiction of Judith slaying Holofernes. Nevermind that this sounds as believable as plowing in Jordan and unearthing the Ark of the Covenant, the Toulouse painting had all the hallmarks of a Caravaggio: the dramatic illumination and shadow, the lush rendering of fabrics, the brush strokes. The find caused a sensation. Since 2014, experts from the Louvre have studied it, France has slapped an export ban on the painting until November 2018, and an art historian has resigned in protest over its display—but the art world has come to no real consensus over its authenticity. Nevertheless, the debate continues to cast an interesting light on sequels, and what they can say about an artist.

Genuine Caravaggio or not, the rediscovered Judith recycles the three former players into new positions, with an Oscar-worthy supporting role by the drapery. The servant moves to center stage and grows some tremendous neck goiters. She gazes upon Judith herself with the same ugly pleasure as she once viewed the murder. It’s as if she’s just finished saying “Attagirl” in ancient Hebrew. Holofernes once again plays a decapitated guy pretty well: scowling, bleeding, one hand raised. The heroine appears even less of a killer than ever, however. She barely touches the general’s hair as she saws through his neck, and she wears the expression of someone who has just remembered where she lost her wallet. 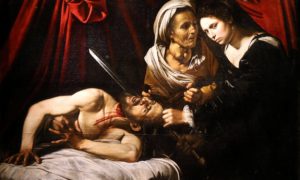 The blood spatter is where things get the most interesting. Remember the alien tongue that jetted out straight from the original Caravaggio general’s throat?

This jugular blood arcs. It’s obeying a law of physics: If you throw an object or particle near the earth’s surface, gravity will bend its path. Guess who discovered that? A certain professor at the University of Padua named Galileo Galilei. When? Somewhere between 1604 and 1608, years after Caravaggio’s alleged second Judith was finished.

In July 2016, a group of scientists in the European Journal of Internal Medicine pointed out that the Caravaggio’s first Judith showed a “rectilinear” blood spatter (alien tongue) consistent with the science of his time, while the Toulouse discovery showed a “parabolic” blood spatter (arc). Caravaggio liked to keep up on his scientific discoveries, and was known for his intense study of the human body, including attending a beheading or two. Therefore, if Galileo’s theory of projectile motion wasn’t known by the time Caravaggio painted his second Judith, then the Toulouse painting might not be his.

To further their theory, the scientist pointed to the correct trajectory of blood spatter in Artemisia Gentileschi’s second Judith, which comes a full decade after Galileo’s theory. Here, the blood not only arcs, it fountains. 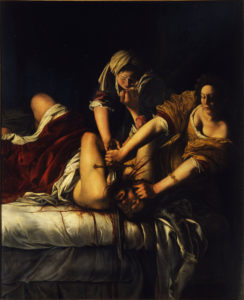 The painting’s triangular composition is largely the same: in top position, the maidservant (who rather resembles the painter herself, doesn’t she?); at right, Judith muscling the sword through the general’s neck. But the blood now spurts up and out. And there’s tons of it. The blood touches the general, the bed, the maidservant, and most importantly, it points at Judith like an arrow, then arches to land on her arm. No matter how Judith holds herself away from the gore, it spatters her. The sword, slanted in the first version, is now vertical, emphasizing the cross of the scabbard. This murder is a holy act. But it is gruesome one. The sumptuous gold dress that Judith now wears, the curled perfection of her hair, contrast even more sharply to the carnage at the painting’s center.

Biographical interpretations of Gentileschi’s work are inevitable, and perhaps unfair to the artist, who clearly was aiming for greatness and not just making a statement about her own life. And yet, Gentileschi’s second Judith is a masterpiece, likely because she had suffered, because she got the science right, and because both of these together, mixed with the distance and skill of years, so deeply enrich the original’s complexity.

A decade passed between the painting of the two Judiths, during which time Gentileschi reached her late twenties, married, became a successful court painter, a mother, and had a passionate love affair with a Florentine nobleman. By the time she painted her second Judith, she had gained some power, far more than she had possessed as her father’s ruined, unwed daughter, restrained in ropes, in a courtroom full of aghast faces who would not help her.

Gentileschi’s first painting shows a focused and brutal act of war. The women claim the authority and agency. They kill without mercy, and they emerge clean.

The second painting, though far more grisly, is also more truthful, as much as truth can come from a single circumstance, as much as a single act can change the fates of many.

The women work together. They will win this battle. The man’s head is almost off. They will achieve everything they aimed for when they entered his tent. They will save their people. But they won’t emerge untouched.

MARIA HUMMEL is the author of Still Lives, a Reese Witherspoon Book Club pick and BBC Culture Book of the Year, now out in paperback. A Stegner Fellow, she taught at Stanford for nine years. She lives in Vermont with her husband and two sons, and teaches at the University of Vermont. 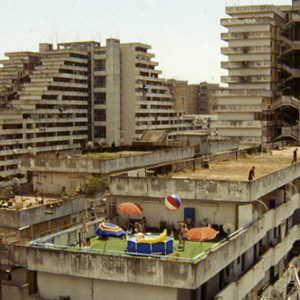 Like most people, I’d never heard of the Calabrian mafia, the ‘Ndrangheta, until I came across the story of The Good...
© LitHub
Back to top