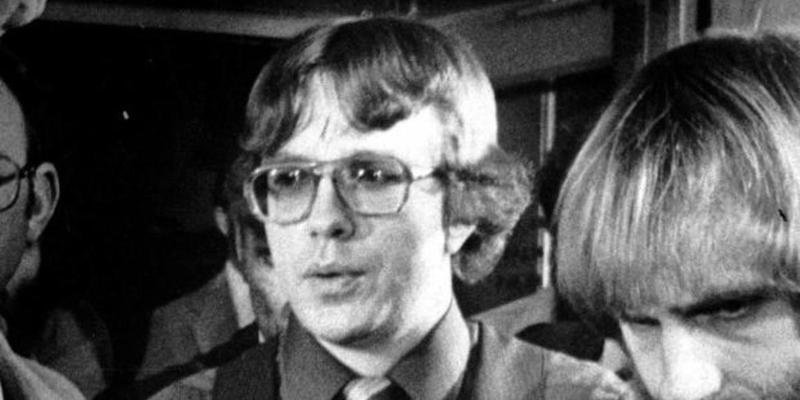 In 1977, an attack on a synagogue left several wounded and one dead. It was only the start of a hate-fueled cross-country rampage.

The sniper had been meticulous. He’d examined potential targets around the city and then surveilled the landscape around the one he’d finally selected for the optimal position the day before.

The Brith Sholom Kneseth Israel Congregation was located on Linden Avenue in the Richmond Heights suburb of St. Louis. It was close to Interstates 64 and 170, so the getaway would be quick and efficient. Across the street there was a knoll with bushes, high grass, and a telephone pole, which would provide good cover and a clean angle on the synagogue parking lot. It was about a hundred yards away—no problem for his bolt-action, center-fire Remington 700 .30-06 semiautomatic hunting rifle, fitted with a telescopic sight. He had brought it to his chosen position ahead of time, hidden in a black guitar case under the bushes. He’d already taken the precaution of filing down the weapon’s serial number so it couldn’t be traced—he tried to never use the same weapon twice, just part of his routine planning. He arrived by bicycle so no vehicle could be identified, no tire tracks traced to a particular type of car. He left his own vehicle at a shopping center parking lot, some distance away.

It was October 8, 1977, a mild, sunny Saturday, with autumn just starting to make its arrival felt.

He had hammered two ten-inch nails into the telephone pole when he visited the site on Friday and stretched a sock between them to serve as a gun rest.

He had looked up the service time and knew that it let out around one o’clock, in time for people to have lunch.

It was just a few minutes after that when the doors opened and the congregants started pouring out. Two men stopped to talk to each other in the parking lot on the north side of the building. There was a young girl standing next to one of them, and a woman and two other girls nearby—wife and children, probably. The first man started getting into his car.

The sniper tensed his grip on the rifle, focused on his heart rate, and controlled his breathing into a conscious, consistent cadence. He peered into the sight and smoothly squeezed off two quick shots in the direction of the two men. There was a loud report that must have sounded like firecrackers exploding to everyone coming out of the synagogue, but he felt, more than heard, it as the concussive wave of the firing lifted the barrel and pushed his shoulder back. A split second later he saw one of the men—the one with the girl by his side—clutch his chest and go down. The other man seemed to flinch, but the sniper couldn’t tell whether he’d gotten him or not. People nearby instinctively crouched down or dove to the ground. The second guy quickly snatched up the other man’s little girl, who was yelling in terror, and dashed for cover between the parked cars. All hell broke loose as the woman with the two girls rushed to the fallen man and bent over him on the pavement. When she stood up, she was screaming and there was blood all over the front of her dress.

After the shooting started, according to multiple later reports, several children ran back into the synagogue building, where the majority of congregants remained, shouting, “They’re shooting people! They’re killing people!”

Taking advantage of the pandemonium, the sniper repositioned the rifle on his shoulder, refocused his aim, and fired off three more shots in the general direction of the synagogue building. The bang only increased the panic. He might have hit one more man; he wasn’t sure. But now it was time to get the hell out of there.

He quickly but carefully wiped down the rifle and guitar case of any possible fingerprints, placed the rifle inside the case, and threw it into the bushes. Then he climbed onto the bicycle and sped off to the nearby shopping center parking lot, unlocked and climbed into his car, turned the key in the ignition, gunned the accelerator, and took off.

The man hit was named Gerald “Gerry” Gordon, forty-two years of age, who, with his wife, Sheila, and three daughters, was among the two hundred or so guests attending the bar mitzvah of Ricky Kalina, son of Maxine and Merwyn Kalina, two of Gerry’s closest friends. He had just been congratulating and saying goodbye to Ricky right outside the synagogue doors before heading to his car with Sheila and the girls. Gerry had a reputation as something of a jokester, so when he went down clutching his chest after the loud pops, people around him thought he was playacting. Even Steven Goldman, the friend he was talking to in the parking lot, thought Gerry was joking, until he glanced down and saw the blood spreading across Gerry’s chest. That was when he snatched up Gerry’s little girl to protect her from whatever was happening.

Ricky ran back into the building to find his parents and get to a phone to call for help. The ambulance arrived within minutes and took Gerry to St. Louis County Hospital, where he was rushed into surgery. The single bullet had pierced his left arm and lodged in his chest. He died on the operating table at around three from blood loss and damage to his lung, stomach, and other organs. He was a salesman for the Ropak Corporation, a paper-products distributing firm. His three daughters were named Hope, Michele, and Traci.

The police also arrived quickly to the scene and immediately cordoned off the area and began interviewing witnesses and looking for physical evidence.

Just as Gordon went down, Steve Goldman thought he felt something like a bug bite on his left shoulder but forgot all about it in the chaos after his friend had been shot. Minutes later, when he was giving his shattering account to a police officer, the officer spotted a bullet hole in Goldman’s suit jacket. That was how close, Steve suddenly realized, he had come to sharing Gerry Gordon’s fate.

Another man, thirty-year-old William Lee Ash, was struck by one of the final three shots, and he knew he had been hit. He was also treated at County. He lost the little finger on his left hand when the shot first hit the hand and then embedded in his hip. His wife, Susan, was Maxine Kalina’s cousin.

The police agreed that five shots were fired in total, in what investigators stated was “a highly premeditated attack.” They found the Remington rifle inside the black guitar case not far from the telephone pole into which the two nails had been hammered. The sock was still attached and damp from the previous evening’s rain, indicating the shooter had been there before. An empty five-round clip was found in the rifle, and five spent shells were recovered nearby. No fingerprints were detected.

A St. Louis County police helicopter pilot spotted a man running across a highway overpass near Brith Sholom and believed he might have been the sniper. Police recovered one bullet in the radiator of a car parked in the synagogue lot and another lodged in the wall of a home across Linden Avenue from the house of worship. Police speculated that a bicycle found about a block away could have been used by the assailant.

Witnesses noted that a man carrying a black guitar case had been in the vicinity about an hour before the shooting. They described him as about five feet, ten inches tall, of medium build, with long curly hair, a fair complexion, and acne scars. He was estimated to be between nineteen and twenty-five years of age. Other witnesses saw a man running through a shopping center parking lot near the synagogue after the shooting, looking over his shoulder as if afraid he was being pursued.

The attack was a huge story throughout the region. Though area Jewish leaders were quoted in Monday’s edition of the St. Louis Post-Dispatch as discounting anti-Semitism as a motive in the shooting, most synagogues added guards and security patrols. “The whole city seemed to go into a panic after the sniper incident,” a police dispatcher was quoted as saying in the same article.

St. Louis police lieutenant Thomas H. Boulch of the Major Case Squad was assigned to lead the investigation, heading up a team of more than twenty detectives, working with officers from the Richmond Heights PD. Boulch was quoted in the newspaper as saying they were keeping an open mind as to motive. “We don’t want to close any avenue. We’re following up on kooks, radical groups, anti-Semitic groups, anyone.” The squad looked into the possibility that the sniper was after a specific individual.

Brith Sholom rabbi Benson Skeff could think of no reason why his synagogue would be targeted. Norman A. Stack, executive director of the St. Louis Jewish Community Relations Council, agreed, telling the Post-Dispatch, “Nothing has really happened recently to indicate any problems within the Jewish community of St. Louis. It could have happened to anyone anywhere.”

That same week, the St. Louis County Police Department’s Identification Bureau successfully employed a chemical treatment to raise the murder weapon’s serial number. With assistance from the Bureau of Alcohol, Tobacco and Firearms in Washington, D.C., the rifle was traced to a previous owner in Irving, Texas. He said he had sold it about four weeks previously for two hundred dollars and provided a description of the purchaser to a police sketch artist. Witnesses said that sketch looked like the man they had seen running through the nearby shopping center parking lot, though investigators were unwilling to dismiss the possibility that two individuals were involved in the sniper attack.

Whoever it was, though—one person or more—had managed to disappear. 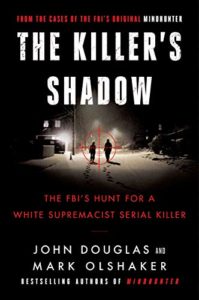 John Douglas, the legendary FBI criminal profiler and veteran author of true crime books, has spent over twenty-five years researching and culling the stories of America’s most disturbing criminals. A veteran of the United States Air Force, he has directly worked and/or had overall supervision in over 5,000 violent crime cases over the past 48 years. He is currently chairman of the board of the “Cold Case Foundation.” One of the foremost experts and investigators of criminal minds and motivations, he currently lives in the Washington, D.C. area. Mark Olshaker is an Emmy Award-winning documentary filmmaker and author of ten nonfiction books and five novels, including Einstein’s Brain and The Edge. His books with former FBI Special Agent and criminal profiling pioneer John Douglas, beginning with Mindhunter and, most recently, Law & Disorder, have sold millions of copies and have been translated into many languages. Mindhunter is now a dramatic series on Netflix, directed by David Fincher. He and his wife Carolyn, an attorney, live in Washington, D.C.

"What My Father Never Told Me" 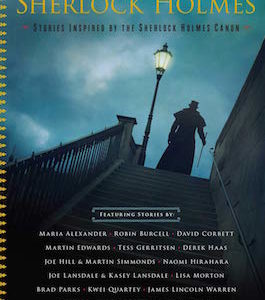 "What My Father Never Told Me"

The room is dark when I wake up, and for a moment I am so disoriented I don’t know what time it is, or where I am. Then,...
© LitHub
Back to top