Detail from The Piccadilly Murder, by Anthony Berkeley

That First Edition Maltese Falcon Could Finally Be Yours

Hitting the auction block in New York later this week is a stellar collection of vintage crime novels and mysteries—231 in all, mainly by American authors—that will widen the eyes of even the most jaded mystery fan. It has been billed by Heritage Auctions as “the best and most comprehensive collection in this genre ever assembled,” and that’s because it is part of the personal library of Otto Penzler, author, publisher, and owner of the Mysterious Bookshop in New York. Some of these first editions are the highest of high-end book collecting, while others are merely volumes that have gone undetected by book hunters in decades of searching.

Here’s a look at ten select books that showcase the range of items on offer. 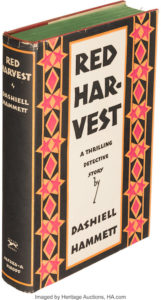 This first edition of Dashiell Hammett’s Red Harvest (1929) has been called “the world’s best copy.” Red Harvest has endured some quirky cover art in its time, but this virtually pristine copy in its original first-printing dust jacket is simply studded with red stars and diamonds. The title page, featuring an orange skull and crossbones vignette, better suggests its violent plot. The bidding starts at $30,000 for Hammett’s first book, a lesser known title—at least lesser known by comparison to, say, The Maltese Falcon. 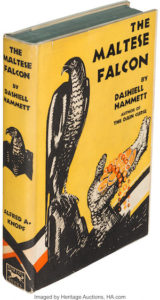 The Maltese Falcon by Dashiell Hammett

Speaking of The Maltese Falcon, Penzler’s 1930 first edition has a few small scuffs but commands attention in its original bright yellow dust jacket. Heritage describes it as “perhaps the highspot of the hard-boiled canon,” and it too is estimated to bring $30,000+. And still there is more Hammett to consider: a first edition of The Dain Curse and a first edition, paperback original of $106,000 Blood Money that contains a touching inscription from Hammett to his lover, the writer Lillian Hellman. 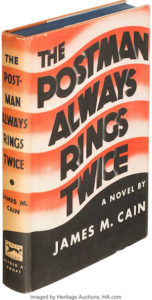 Here’s another familiar title, The Postman Always Rings Twice (1934) by James M. Cain. It is, said the auctioneer, “One of the most important twentieth-century crime novels and the basis for a number of adaptations … the most famous of these being the 1946 film noir starring Lana Turner.” This first edition inscribed by the author to Samuel Marx, a screenwriter and producer with MGM, gives it what serious book collectors call association value. The bidding started online at $3,200 and is already escalating. 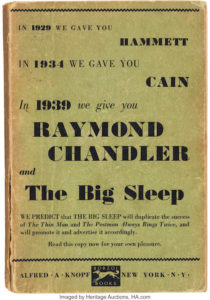 The Big Sleep by Raymond Chandler

Instead of the signed first edition of Raymond Chandler’s first novel, The Big Sleep, which will cost about $15,000, imagine, if you will, being among the very first readers (booksellers and reviewers) to meet Philip Marlowe. It’s 1934, and in the mail one day arrives a pale green paperbound book bearing the words: “In 1929 we gave you Hammett. In 1934 we gave you Cain. In 1939 we give you Raymond Chandler and The Big Sleep.” The publisher, Knopf, knew it was onto something, and this was its proof—literally, the advance proof, now valued at about $1,000.

Lest this look like a line-up of big names with price tags to match, let’s pause on a first edition of William Lindsay Gresham’s Nightmare Alley in its monster green illustrated dust jacket. The badass inscription by the author to fellow mystery writer and magician Clayton Rawson—“For / the Great Merlini – / who can stretch a / rope without stretching / his neck, same time / Bill Gresham…”—is alone worth the $500 opening bid.

The arresting cover art for Cornell Woolrich’s The Bride Wore Black (1940) stops one dead in her tracks. Turns out this first edition, inscribed by the author to literature professor Donald Yates, is exceedingly rare because Woolrich was a reclusive figure, and he seldom signed books. “I’ve never had another copy of this uncommon title in my forty years as a bookseller,” said Penzler, who called it one of his favorites. At $3,000+, The Bride Wore Black is the most expensive Woolrich title on offer, although his first novel, Cover Charge (1926), appears to be catching up. 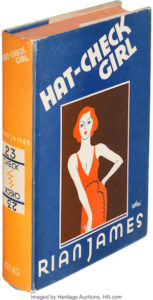 So many of these titles will be familiar to film buffs. Ginger Rogers, for example, starred in the 1932 film adaptation of Rian James’s Hat-Check Girl, a comedy about a young woman who falls in love with a millionaire suspected of murdering a journalist. A first edition, such as this, is so uncommon on the market, the auction house could find no previous auction records for it. In early online bidding, the book has already surpassed its $500 estimate. 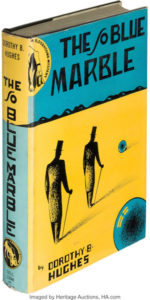 The So Blue Marble by Dorothy B. Hughes

You can count on one hand the female authors in this sale. The Dorothy B. Hughes lots—an advance issue and a first edition of her debut, The So Blue Marble (1940), three copies of The Blackbirder (1943), and a first edition of In a Lonely Place (1947)—stand out for the heartfelt inscriptions she penned to Penzler in each. Penzler has long been involved in reprinting Hughes’s works, including a 2018 edition of The So Blue Marble, which Publishers Weekly called a “forgotten classic.” 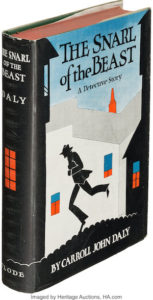 The Snarl of the Beast by Carroll John Daly

Carroll John Daly has been dubbed the “first hard boiled detective writer,” so it’s no wonder that he turns up thirteen times in this auction. With an estimate of $2,500, the first edition of The Snarl of the Beast (1927), the first of his books to feature private detective Race Williams, leads the pack. While Daly tends to stand in the shadow of Hammett, at least one fan, writing in Black Mask, feels that “Daly’s contribution to the hardboiled genre was indeed monumental; far more than simply being the first at bat.”

We’ll end where detective fiction all began: Edgar Allan Poe’s Tales, published in 1845. Poe’s collection of twelve stories, including “The Murders in the Rue Morgue” and “The Mystery of Marie Rogêt,” is considered by many to be the cornerstone of the genre. First editions, like this one, are rare in original wrappers, less so when they’ve been rebound in purple leather. Still, bids are already ahead of the $6,000 estimate. 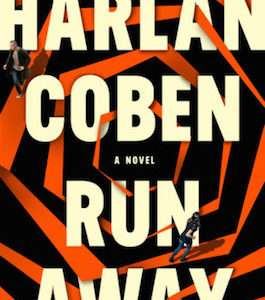