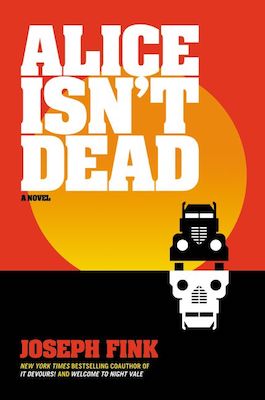 The following is an exclusive excerpt from Alice Isn’t Dead, a novelization of the eponymous podcast. Both podcast and novel are created by Joseph Fink, also known for creating the podcast and book series Welcome To Night Vale. In the following passage, a truck driver looking for her missing wife Alice encounters supernatural beings and contemplates the meaning of devotion.

Alice’s funeral had been a strange occasion. Not because she wasn’t well liked. Almost everyone liked Alice the moment they met her. She had an ease and a casual intimacy that transformed the people she met instantly into friends. In this way she balanced out Keisha, who was withdrawn and anxious. At a party on her own, Keisha would feel lost, but with Alice she was able to step into conversations, letting her wife lead the way whenever her own line of thought faltered.

The funeral was strange because Alice’s death had been strange. No cause of death. No body. No certainty. There was a disappearance, and after a long and increasingly hopeless search, the presumption of death. And so Alice’s friends and her family mourned while holding the thought that maybe, after all, Alice was alive somewhere, although none of them, least of all Keisha, believed it.

Meanwhile the funeral presented Keisha with what was, in a practical way, a party to navigate, and she did not have Alice to help her. Instead Keisha carried her grief through the crowd, and her friends reached out and softly touched her and murmured, and she kept moving room to room, as though in one of those rooms, somehow, Alice would be waiting.

Two years after the funeral, knowing Alice wasn’t dead, there were times Keisha hated her, of course. But through all of that she loved her. Loved her more than she had ever loved anyone. And so she would continue to look for the wife she loved and hated. Keisha tucked up her legs on the small berth in the back of her truck’s cab. On the pillow next to her, unread because she couldn’t find the concentration, was one of the books from the library she had collected under the passenger seat. Outside the cab, she heard, as she swore she had heard every night since that night at the gas station diner, the whisper-scratch of fingernails. A sound so quiet it was easily mistaken for silence. But she was sure it was the boogeyman, the Thistle Man, waiting for her to get curious or afraid enough to investigate.

“This better be worth it, Alice, ” she whispered. Nothing ever could be.

The funeral was strange because Alice’s death had been strange. No cause of death. No body. No certainty.

She saw the Thistle Man again and again in the weeks following the murder. Behind the bathrooms at rest stops, in the snack aisle at gas stations, sitting alone at the biggest booths of the smallest roadside bars, places with one kind of beer on the menu and video poker in the bathrooms. Clumsy and brutal movements, like he didn’t understand how his body worked. Sharp, yellow teeth. Yellow fingernails, not cigarette yellow, but translucent yellow below the surface.

In Horse Cave, Kentucky, she saw him in the buffet line at the Love’s Travel Stop. He was leering at her, and eating pizza with snatches of his spindly fingers, and she, no longer hungry, put the jerky she had been about to buy back on the shelf.

In Haugan, Montana, she saw him perusing the bargain knife selection at the 50,000 Silver Dollar Bar and Gift Shop, the biggest gift shop in the state. Animatronic statues of angels flapping their wings. Ceramic wolves in ceramic landscapes. Signs with cutesy sayings like “A Closed Mouth Gathers No Foot.” He held up a knife and winked at her and then laughed at something the salesman said. Later he would eat the salesman alive.

In Davis City, Iowa, the Thistle Man crossed the street in front of her. The town was small, almost all of it visible from its main intersection.

Her breath caught when she realized what was gazing back at her from the crosswalk, smiling into the hanging folds of his skin, and winking, and then the light was green and she tested out the limits of her truck’s acceleration.

In each instance, no one else reacted as though there were anything off about the Thistle Man. It wasn’t that they didn’t see him. She noticed many of them look at him, but then their gazes slid off him. He wasn’t invisible. People saw him and then decided they didn’t want to.

The night of the Iowa encounter, still shaken by what she had seen, she stopped to treat herself to a hot dinner rather than a protein bar eaten while driving. “So what do you do, honey?” said the man at the counter next to her. She had gone through some version of this conversation almost daily for the year she had been on the job. Please don’t. Please, no, she thought. I just want to eat this food and get back on the road, where the miles turn to cents turn to dollars turn to a paycheck.

Her breath caught when she realized what was gazing back at her from the crosswalk, smiling into the hanging folds of his skin, and winking.

She nodded to the trucks parked outside. It was a truck stop. There was no one in this restaurant who had any other job except the people cooking the food and the people serving it. What else? her nod said.

He looked at the trucks, then looked at her, and grinned to show he had a new and exciting thought, a thought that would really change things for her.

She wasn’t big, she wasn’t white, she wasn’t male. Her hands shook as a rule, and her voice was soft when she spoke at all. But she drove a truck. She did it for a living. What does a truck driver look like?

Your days are numbered, motherfucker, she wanted to say.

There’s a new world coming. Get out of the way or get on board, I don’t care which.

She took her food and moved to an empty table across the room. He made more of a meal of innocently throwing up his hands than he did of the lukewarm meat loaf on his plate.

She thought about dinners she and Alice had back home, before Alice’s disappearance, before Keisha’s long search. Nights where they made pizza. Dough from scratch. Sauce from scratch.

Cheese from the store.

Keisha had loved making the dough for the crust. Flour and water in her hands, first separate then merging into a silky whole, the yeast and gluten giving it life and breath. Her hands and her shirt covered in flour because she had never gotten in the habit of wearing an apron. They would open a bottle of wine and eat the pizza they made and watch whatever on TV and fall asleep in a wine-and-bread coma.

Love is cooking together. It’s creating together. That’s what Keisha thought. She didn’t know what Alice thought.

She could go to the police. She could tell them, what? She had witnessed a monster eat a man, in a murder no media had reported on? And this same monster was now following her, although she couldn’t prove it?

No, for now she would have to take this on herself, as scared as she was. Later that night, dinner over, man ignored as he tried to engage her again on her way out, and a good fifty billable miles of road driven, she switched on her CB radio, held the mic up to her mouth for a long time on the open channel.

She stopped to think but kept the send button held. She didn’t want a response. She had heard enough from other people that night.

“You freed me, and I didn’t ask you to. I didn’t want you to. I am more free now than I have ever been, and I am spiraling across this country. Maybe you are too. I want our lines to cross. Even one more time.”

She put the mic back. Switched the radio off.

Hand upon hand, she thought, upon leg upon heart upon couch upon a day where we made pizza together. That’s love, Alice. That’s what it’s made of. And so what is this?

From ALICE ISN’T DEAD. Used with the permission of the publisher, Harper Perennial. Copyright © 2018 by Joseph Fink. 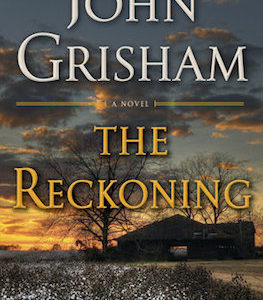 The Reckoning On a cold morning in early October of 1946, Pete Banning awoke before sunrise and had no thoughts of going back to sleep....
© LitHub
Back to top