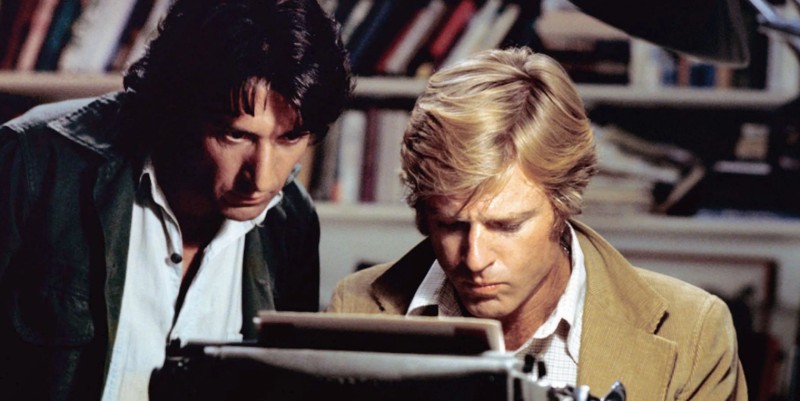 Presidential scandals and the writing of a mystery classic

There are differences between Watergate and Ukraine though. One striking one is that Watergate spawned one of the classics of crime reporting—Bob Woodward and Carl Bernstein’s 1974 All the President’s Men, which became a hit movie in 1976. The book and film both were suspenseful mysteries that told the story of how two young reporters tracked down a criminal who was also the most powerful man on earth. Looking back on them now, it’s striking how well the tropes of crime fiction fit Watergate—and how poorly they fit our current Ukraine scandal.

The first paragraph of All the President’s Men immediately drops you into the hard-boiled world of noir, with clipped, staccato sentences describing a matter-of-fact world of petty crime and shadowy acts.

June 17, 1972. Nine o’clock Saturday morning. Early for the telephone. Woodward fumbled for the receiver and snapped awake. The city editor of the Washington Post was on the line. Five men had been arrested earlier that morning in a burglary at Democratic headquarters, carrying photographic equipment and electronic gear.

The film took that blueprint and slouched off with it, creating a grimy, shabby mise-en-scène, through which Robert Redford (as Woodward) and Dustin Hoffman (as Bernstein) hustle nervously in rumpled suits, gulping coffee and trailing cigarette smoke. The book and film both capture the monotonous grind of investigative work with a bleary verisimilitude that puts Ed McBain’s police procedurals to shame. Our protagonists call sources and call more sources, sort through library slips, knock on doors, get turned away, knock on more doors, get turned away, and knock on even more doors, in a pre-internet fugue of shoe leather and rotary dialing.

The film’s best scenes are those with the mysterious Deep Throat, Woodward’s source high in the executive (years later revealed to be FBI Associate Director Mark Felt.)  Woodward arranged for meetings with him by placing a flowerpot with a red flag on his balcony; then he would throw off possible pursuit by taking two taxis late at night to an empty garage. In the echoey, empty parking lot, Hal Holbrook as Deep Throat whispers secrets from the shadows as Redford’s nervous eyes flicker back and forth. Holbrook’s face, moving in and out of the darkness, serves as a metaphor for the darkness swallowing the country, and the light feebly trying to penetrate all the way into the Oval Office.

All the President’s Men really sings as crime literature, though, not because of its atmosphere, great as that is, but because of its plot. The story is a mystery, in which Woodward and Bernstein start with the burglars who broke into Democratic National Headquarters, and then try to follow the strands of the conspiracy as far as they’ll go. How did the burglars get their money? Who convinced them to plead guilty? Who gave orders to apparent burglary masterminds Howard Hunt and G. Gordon Liddy?  Why didn’t the Justice Department investigation ask witnesses certain obvious questions? “You build convincingly from the outer edges in, you get ten times the evidence you need against the Hunts and Liddys,” Deep Throat tells Woodward. “Then you do the same thing at the next level.” Watergate entangles White House operative Howard Hunt, special counsel to the President Charles Colson, former attorney general John Mitchell, White House Chief of Staff Bob Haldeman…and could it go even further?

Obviously, everyone reading All the President’s Men or watching the film knows that the conspiracy does in fact lead to Nixon, who was just two months from resigning when the book came out in June 1974. But the narrative works because Woodward and Bernstein, and the other characters in the novel, didn’t know that Nixon was a corrupt, paranoid, incompetent crook when the investigation started in 1972. On the contrary, most of the press and public, and even Nixon’s political opponents, gave him credit for running a tight ship with at least a minimal level of integrity. Bernstein—who was never a fan of the Nixon administration—is shocked when one source tells him that the White House political operation was obsessed with walkie-talkies and “intelligence nonsense” and that many of the people there were frankly “dumb.”

“This picture of the White House was in sharp contrast to the smooth, well-oiled machine Bernstein was accustomed to reading about in the newspapers—those careful, disciplined, look-alike guards to the palace who were invariably referred to as ‘the President’s Men.'”

Even fairly far into the investigation in the book, Woodward tried to set up an interview with Nixon to get his side of the story in the hopes that he might have an explanation. People were not prepared to believe the idea that the President of the United States would have involved himself in tawdry political tricks and botched burglaries, especially when his reelection seemed almost assured anyway. The whole structure and force of All the President’s Men depends on a presumption of Nixon’s innocence. “I don’t believe the story,” one of the Washington Post editors says early on in the film. The President is above suspicion—until, step by step, the investigation leads Woodward, Bernstein, their editors, the country, and the film audience to conclude that he is not.

This is why you could never write an All the President’s Men about Donald Trump. Nixon’s credibility was stripped away. Trump never had any to begin with.

No one who knows anything about Trump could possibly believe in his moral character. Trump’s whole public career has been mired in petty, cruel scandals. In 1973 the Department of Justice sued him for refusing to rent to black tenants. In 2016 he settled with students of Trump University, who sued him for scamming them out of thousands of dollars for useless real estate education courses. In the intervening years he regularly harassed and assaulted women according to dozens of accusers.

More, Trump has said repeatedly and publicly that he wants to illegally manipulate US elections. During the 2016 campaign, he gave a speech encouraging Russia to hack and release his opponent’s private emails. No one was surprised when investigators found evidence of numerous contacts between the Trump campaign and Russia, though administration stonewalling and obstruction prevented the discovery of a definitive smoking gun. Then in July, a whistleblower complaint to Congress alleged that Trump had threatened to withhold military assistance to Ukraine unless the government agreed to nivestigate Joe Biden of impropriety and corruption. Trump then released a memo of a phone call confirming most of the charges. Then he went to the White House south lawn and called for Ukraine and China to investigate his Democratic opponent on national television.

Of course, there are many details of the Ukraine scandal that have yet to come out, and the investigation may end up implicating individuals who have not yet been named. Ukraine is a crime story in the narrow sense that it is a story about the commission and investigation of crimes. But it lacks mystery and suspense, since the main villain of the piece keeps publicly announcing his villainy. Ukraine is less like a noir procedural and more like a superhero film, where the villain comes on early in the first act to proclaim, “I am Dr. Evil! I am going to commit crimes and more crimes! You can’t stop me from committing crimes! Hahahahahahahaahaha!”

It’s possible that a great book and/or a great film will come out of the Ukraine scandal. Someone might write a biting, satirical account of Trump’s venality and incompetence. Or, in the worst case, we might someday read a bleak tale about how the President protected by cronies in the Republican party, was granted impunity to rig the 2020 election in plain sight, and democracy in America effectively ended.

But whatever books are written about Ukraine, none of them will be great crime narratives to rival All the President’s Men. The whole machinery of crime literature—the investigation, the uncertainty, the mystery—is irrelevant when the criminal just goes to the South Lawn and unfurls a big banner saying, “I did it.” Watergate, the reboot, just isn’t as well written as the original. History played out the first time as pulp. Whether it will repeat the second time as farce or tragedy, we don’t yet know.

Noah Berlatsky edits the online comics-and-culture website The Hooded Utilitarian and is the author of the book Wonder Woman: Bondage and Feminism in the Marston/Peter Comics, 1941-48. 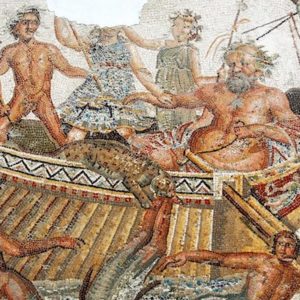 In the first century ad Tacitus refers in his Germania to the boats of a people called the Suiones, apparently living somewhere...
© LitHub
Back to top