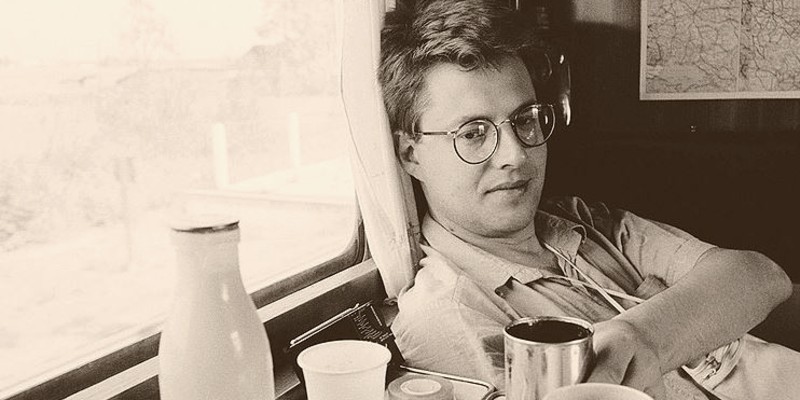 For decades after the Swedish PM was assassinated, the future crime novelist waded through a web of conspiracies and extremists.

The Day of the Assassination
Stockholm, February 28, 1986

On the day the prime minister of Sweden would die, Stieg arrived late to work, as usual, with a cigarette in his hand. He decided to take the stairs to save at least half a minute over using the new elevator, which was inexplicably slow. The stairs didn’t bother him, even if he had to climb all the way to the top floor. The lit cigarette in his right hand somewhat limited his ability to take in oxygen, but he was only thirty-one and still full of unswerving energy. He jogged up, fueled by a mix of caffeine and nicotine, and in his left hand he carried his worn briefcase, empty apart from a couple of pieces of paper.

Just over a year earlier, TT, Sweden’s leading news agency, had moved into the newly renovated offices in what used to be Saint Erik’s Brewery on Kungsholmstorg. The scale of the staff and equipment was on par with Sveriges Radio, Sweden’s national public radio, or Dagens Nyheter, the country’s biggest morning newspaper. The editorial staff took up the whole sixth floor and Stieg was forced to traverse the entire open office landscape just to get to his desk. The vaguely factory-like feeling was a good match for Stieg’s disposition. Just inside the entrance there was a long line of Toshiba fax machines. Everyone knew they had far more than they needed, but in the yuppie 1980s, it was important, particularly for news agencies, to demonstrate that you were willing to go that extra mile to communicate. To the left sat the editorial team, TT’s highest-ranking employees, including a few middle managers. Stieg tried to make himself invisible, but his boss, Kenneth Ahlborn, yelled “good morning” a little too loudly for Stieg to be able to get away with not responding.

Stieg had missed his deadline three times already and another boss would have used a sterner tone, but there was a limit to even Kenneth’s light touch and Stieg knew he was going to have to hand his piece in today. 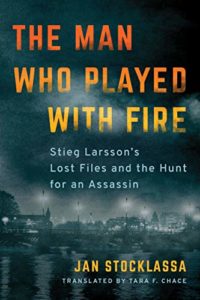 Up the stairs from the large editorial department, he came to one of Sweden’s largest newspaper archives, with long rows of shelves with wheels on the sides to roll along a rail mounted to the floor, another impressive installation. Stieg walked along the short ends of the archive shelves, turned in behind the last one, and stepped through the doorway into his office. The small room, with an interior window looking out at the archival shelves but no exterior windows, could be described as functional at best. He shared the office with Ulla, the lead archivist, and a few temp workers in need of desk space. Despite the out-of-the-way location, he didn’t feel neglected—quite the contrary actually. Everyone he wanted to deal with knew where he sat, and somehow the well-worn armchair he kept for visitors saw more traffic than the flashy sofa out in the actual editorial department one flight down.

Today was special. It was the last Friday of the month and everyone had been summoned for the monthly meeting that was the new CEO’s idea—to “get more feedback” from the organization, as he put it. As a matter of fact, the information flow basically went one way only, down, but that suited Stieg just fine. His immediate supervisor’s position in the hierarchy was still strong, and he was the one who had placed Stieg so far from the center of the action, where he was often able to work in peace on the stories he was passionate about.

Aside from his regular work as an illustrator, Stieg was sometimes allowed to write longer stories that often pertained to some issue he was highly engaged in, and if there were any hours left over beyond that, he spent them doing what was really important: mapping out Swedish right-wing extremism and its ties abroad. He could hardly remember when it began, but fighting intolerance and injustice had been part of his life even in his early teen years. Growing up with a maternal grandfather who hated anything having to do with Nazism or right-wing extremism was a big part of his motivation, but Stieg was even more committed to the issue than his grandfather had been. He had dedicated his life to it.

Right now, though, he was late to the meeting where his only pur­pose was to show his face to prove that he shared the company vision so that he could then return to his own work in peace and quiet. It was ten o’clock, which was early for him, so when he walked into the meet­ing room, his nearest coworkers were surprised to see him. He pulled the door shut behind him and sat down in his chair, winded, just as the CEO switched on his beaming smile and welcomed everyone.

The meeting contained no surprises. The leadership strongly believed in the motto “Repetition is the mother of skill,” and Stieg was quite sure that these visuals of the business plan for 1986 had been shown at least three times before, possibly in a slightly different order. Plus, the noise from the fan in the overhead projector was making him very sleepy.

The only surprising thing was that one of the editors got up at the end of the meeting and reminded everyone that the editorial team was invited to the restaurant Tennstopet that night. Unstated but understood was the fact that only colleagues with the job title of reporter, journalist, or editor need bother showing up. Someday, Stieg would become a crime reporter, but before that goal came true, he was excluded from this group.

For Stieg, this Friday was a little unusual since he and Eva had decided that they would eat dinner and spend the evening together. Not that they were going to eat out, just make dinner at home or order pizza, but that still meant that he would need to keep track of the time to make sure he left work by seven or, well, eight at the latest. The city hall subway station was only a block away, and he would be home in suburban Rinkeby in less than half an hour. Otherwise there was nothing much on the docket for the day. He would complete his illustration showing how the entire Swedish economy was controlled by the Wallenberg family, one of the most powerful constellations of business owners in the world’s financial markets. True, the relatively recent financial crises of the 1970s had definitely shaken the empire to its core, but their power still permeated Swedish society, extending into anonymous foundations, corporations, and associations, which on paper had no apparent ties to the family, but in which all the key players were close to the Wallenbergs.

Over that map he had super­imposed a networking diagram that highlighted ties and links back and forth in a way that would have made a conspiracy theorist dizzy if Stieg hadn’t made the whole thing easy to read by using dashed lines and gray scale.

After thinking about it for a long time, Stieg created a map with downtown Stockholm as the background. Over that map he had super­imposed a networking diagram that highlighted ties and links back and forth in a way that would have made a conspiracy theorist dizzy if Stieg hadn’t made the whole thing easy to read by using dashed lines and gray scale. Four-color printing was out of the question. It had been technically possible for a few years, but only a couple of the evening newspapers were using it, and they weren’t among TT’s largest clients.

Stieg lit yet another cigarette and set down his coffee cup to the side of the drawing paper and the weights that held it in place. When the ash on his cigarette grew too long, it fell onto the paper and he expertly blew it away, brushed it off into his hand, and put it into one of the empty coffee cups on his desk. Most of his coworkers took an early lunch, but Stieg would work until his mind grew sluggish and he was forced to raise his blood sugar. He had half a cheese-and-cucumber sandwich from the cafeteria, wrapped in plastic, for when he got hungry.

When Stieg next looked at the time, it was already five thirty. Suddenly he really needed to hurry to get the illustration finished. Asking for still more time didn’t feel like an option, because then there was an increased risk that he would have to push back his next feature article, which was his chance to discuss important issues in a way that would reach a wide audience.

Stieg tested adding the old Marcus Wallenberg maxim “Esse non videri” over part of the map, “to be, rather than to seem.” That defi­nitely fit with the image’s message of hidden connections, but without including the translation, no one would understand it. And if he added more text, it would be a big mess. He decided he wouldn’t leave his seat until he was done. Surely two hours, or three at most, would be enough. Then he could just make it home before Eva gave up hope of ever trying to eat dinner together.

Presumably something magical about the plastic overlay with the lines and symbols made the time fly by. Suddenly it was a little after eight, and he realized that immediate action was required. He picked up the handset of his slightly scratched Ericsson Dialog phone, and with the familiar clicking sound of the rotary dial as backdrop, he wondered how to explain to Eva that he wasn’t going to be home until midnight and would thus once again miss their evening together.

The call wasn’t actually that hard, because Eva always accepted his explanations, but he felt guilty, which complicated things. It took him ten minutes after he hung up to get back into the flow again, but now at least he would finish his illustration over the course of the evening.

When he finally reached for the on-off switch on the heavy cast-iron base of his desk lamp and turned off his light, it was 11:20 p.m., right about the time that shots were fired on Sveavägen, killing Sweden’s prime minister. Stieg, though, was blissfully unaware, wondering instead if he would be able to make the next subway train to Rinkeby.

THE MAN WHO PLAYED WITH FIRE © 2018 by Jan Stocklassa. Reprinted with the permission of the publisher, Amazon Crossing. All rights reserved.

Jan Stocklassa is a Swedish writer and journalist focusing on large-scale affairs in international politics. He is the author of The Man Who Played with Fire: Stieg Larsson's Lost Files and the Hunt for an Assassin. Following the original publication, Swedish police are actively pursuing the leads presented in the book in the assassination of Swedish Prime Minister Olof Palme.

Berlin: A City of Crime Fiction 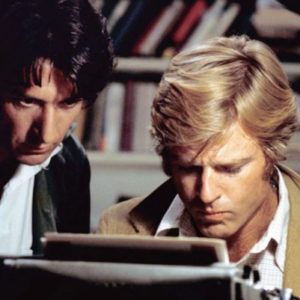 Trump's Ukraine scandal has been repeatedly compared to Watergate, for obvious reasons. In the Watergate scandal of the early...
© LitHub
Back to top