The Long, Sordid History of Heroin, the Original Wonder Drug

The most successful drug in history, its demonic sibling, and the brilliant colors created from synthetic dyes that dominate fashion all gestated from the same foul, gelatinous, carcinogenic fount—coal tar.

The dyes came first. In 1856, a precocious British teenager named William Henry Perkin thought to make his fortune by synthesizing quinine, a substance extracted from cinchona tree bark that had been found to effectively treat malaria. Cinchona trees being indigenous only to the Andes, natural quinine was extremely costly, so anyone who could develop an inexpensive synthetic would control the market. Puttering in his home laboratory with aniline, a coal tar component, he produced a black substance that, when combined with alcohol, yielded a purple liquid that he found could dye silk and remain stable in sunlight. “Mauvine,” as he called it, was the first of several aniline dyes that revolutionized what was an already booming textile industry.

By the 1880s, chemists were furiously mining coal tar derivatives and any other substance that showed promise to create synthetic dyes. Germany dominated the field with companies such as AGFA, BASF, Bayer, and Hoechst in fierce competition. But aniline had also been found to have medicinal properties, so in the 1890s, an enterprising chemist at Bayer Dye Works decided to go the other way. Rather than create marketable dyestuffs from products associated with medicine, why not try to create marketable medicinal products from substances associated with dyestuffs?

The inspiration most likely came from the work of the German physician Paul Ehrlich, who would later become world renowned for developing an effective treatment for syphilis. Ehrlich’s early work involved developing ways to study cells and microorganisms under a microscope. In the 1880s, while attempting to find materials that would effectively stain slides—coloring was to be studied while leaving the rest unchanged—he came upon another coal tar derivative, flavine. Flavine, a yellow dye, Ehrlich soon discovered, killed bacteria, specifically those that caused abscesses.

Just which chemist at Bayer initially decided to go Ehrlich one step further is unclear, but the one who did the lab work was Felix Hoffmann.  In 1897, Hoffmann made an interesting discovery while experimenting with salicylic acid, another tree bark product. Salicylic acid had been shown to be highly effective at reducing fever, pain, and inflammation, but when administered in its pure form, it also engendered agonizing, sometimes fatal, gastrointestinal damage. Unless some means could be found to ameliorate those side effects, the substance was pharmacologically useless.

Acetylization seemed to have blunted morphine’s addictive properties. What was more, it made them feel, “heroisch,” heroic.

Official Bayer Company history claims that Hoffmann had begun his experiments because his father, a rheumatism sufferer, was experiencing intestinal bleeding from taking salicylic acid, but there is not a good deal of documentation to this tale. More likely is that his superior, Heinrich Dreser, was responsible for the researches and the motive was pecuniary rather than altruistic. For whatever reason, at some point Hoffmann boiled salicylic acid in acetic acid, which produced a substance called acetylsalicylic acid. When Dreser tested the new compound, the results were astounding. Although none of the medicinal properties had been lost, it was now far easier to tolerate.

Hoffmann decided acetic acid was a reagent potentially as valuable as the active ingredients with which it was combined, and began to experiment with other medicinal substances with harsh side effects. About two weeks later, he got to morphine.

The result was a compound called diacetylmorphine, which, once more, seemed to work better and more efficiently than the pure form of the drug. Dreser immediately conducted tests, with himself and his co-workers as subjects.  They all agreed. Not only were the therapeutic benefits immense, but acetylization seemed to have blunted morphine’s addictive properties. What was more, it made them feel, “heroisch,” heroic.

That sounded right, so Bayer decided to market the new drug under the trade name “Heroin.”  Late in 1898, Dreser gave an address to the Congress of German Naturalists and Physicians extolling the new drug as a safe, powerful, non-addictive, cough suppressant, ideal for use with children for whom cough was a major cause of death.  Hoffmann’s other discovery would be marketed as Aspirin, “A” for acetyl, “spir” for spirea, the willow tree from which salicylic acid was derived, and “in” as a standard, easy to pronounce coda. 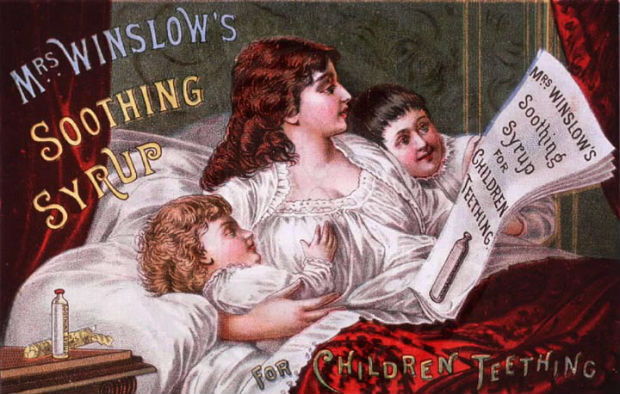 In 1899, Bayer introduced its products across Europe, but especially in the world’s most fertile market for new drugs—the United States. America had virtually no restrictions on what could be sold, or what claims made, and so the nation was awash in patent medicines with names such as, “Ayer’s Cherry Pectoral,” “Mrs. Winslow’s Soothing Syrup,” “Darby’s Carminative,” “Godfrey’s Cordial,” “Dover’s Powder.” It was virtually impossible to turn a page of a newspaper and not see an advertisement for some quack potion that would kill as many as it would cure. For example, there was “Orangeine, The Pocket Physician.”  On top of the ad was the image of a beautiful young woman. “Miss Hope Ross,” the copy read, “the charming ‘Little Rebel’ from ‘Secret Service’ writes, ‘Orangeine has never failed me and I have given it severe tests.'” The text went on to promise cures for “headache, hay fever, neuralgia, rheumatism, depression, exhaustion, seasickness, grip, etc.” all with “No reaction.”  The drug was, consumers were assured, “Perfectly harmless.”

But the active ingredient in Orangeine was acetanilide, a toxic aniline derivative. It might reduce fevers, but it would also cause kidney and liver damage, and might even lead to heart failure. For most, it would induce methaemoglobinaemia, causing the user’s skin to turn not orange but blue. But with the endorsement of celebrities like Miss Hope Ross, the drug enjoyed brisk sales in the unregulated American drug market.

And so Bayer invested heavily in this land of economic opportunity, widely advertised both new drugs, and recruited physicians to prescribe the new products and offer testimonials, for which, then as now, they were generally paid.

Article continues after advertisement
Heroin was sold as pastilles, cough lozenges, tablets…millions of doses were dispensed by enthusiastic physicians, sometimes to children as young as two years old.

And it all went swimmingly. Heroin was sold as pastilles, cough lozenges, tablets, water-soluble salts, and, most popularly, as “Glyco-Heroin,” an elixir in a glycerine solution. Literally millions of doses were dispensed by enthusiastic physicians, sometimes to children as young as two years old. Praise for the new wonder drug rolled in from across America. There were, it was true, some odd, annoying rumors of patients developing a “tolerance,” but for years these were dismissed as anecdotal and unreliable.

Eventually, of course, the rumors could no longer be brushed aside. In 1905, amidst America’s first heroin epidemic, and with other patent medicines poisoning thousands, Collier’s magazine published “The Great American Fraud,” a series of eleven articles by muckraking reporter Samuel Hopkins Adams. Along with Upton Sinclair’s The Jungle, Adams’s work became the major impetus for passage the following year of the Pure Food and Drug Act. (Later in his career, Adams took to writing short stories, one of which was adapted into the Oscar-winning Clark Gable, Claudette Colbert film, “It Happened One Night.”) Of almost equal impact was E. W. Kemble’s cover illustration for the series’ first installment.

With the opioid crisis renewed and drug company profits once again at the center of it, I found this story both topical and irresistible. But how best to get it across, fiction or non-?  In the end, I decided that because I was dealing with events more than a century removed from current headlines, fiction was the best way to personalize the narrative and depict the human costs of an episode that mirrors what so many Americans are dealing with today. In addition, I was able to use my protagonist, Noah Whitestone, a young physician, to portray just how difficult it was—and still is—to battle major financial interests that are growing rich from products that are causing immense harm to society.

I chose crime fiction specifically for two reasons. The first is that there are few other genres that allow an author to make a story more taut and urgent. The second is that dispensing a lethal, addictive drug to children is a crime, or at least should be. As such, I could send Dr. Whitestone off to try to find the reason for the death of one child, and in the process find the reason for the deaths of many others.  That quest, in turn, allowed me to introduce some key real life players in the drama.

One was Abraham Jacobi, probably the most important pediatrician in American history, and the man for whom Jacobi Medical Center is named. Another was Justin Herold, who was one of the pioneers of forensic science. Herold was an especially interesting character. At twenty-four, he was appointed coroner’s physician in New York City, the youngest man ever to hold the post, and fifteen years later published A Manual of Legal Medicine, which is remarkably detailed and set a standard for forensics that has held ever since. (It contains tests for morphia that Dr. Whitestone employs with varying degrees of success.) Herold was forced from his position by political hacks and went into private practice, eventually offering expert forensic testimony in more than two thousand criminal trials.

I was also able to broaden the tableau and blend events surrounding the central plot into the narrative, again taking care to maintain both accuracy and authenticity of personalities. For Deadly Cure, I was able to use the war in the Philippines, the monumental arch erected at 23rd Street and Broadway in New York to honor Admiral George Dewey—which subsequently fell apart only years later—the city’s new subway system, the anarchist movement (with its “scandalous” sexual mores), and the incorporation of the city of Brooklyn into what became Greater New York, on January 1, 1898.  I was even able to include a scene with Theodore Roosevelt, which I was pleased to discover was organic to the story.

Still, even in a novel, I’m still an historian and could not be fanciful. Whenever I write fiction, I study dress, food, geography, and even speech patterns of whatever period I’m writing about, so that the fictional world I create reflects society as it was. (The Orangeine ad, for example, is reproduced verbatim in Deadly Cure.) There can be (almost) no cheating, distorting the timeline, or allowing characters to behave as they did not or would not in real life.

Nonetheless, although I must take care to only include things a character would have done, there is the opportunity of also being able to include anything a character could have done. By presenting the Heroin saga as a crime novel, I hope to keep the pages turning while providing perspective on a past public health crisis that enlightens our own.

Lawrence Goldstone began life on Wall Street and has now written over a dozen books, including most recently the historical thriller, Deadly Cure, and the nonfiction title, Drive!: Henry Ford, George Selden, and the Race to Invent the Auto Age. He and his wife, author Nancy Goldstone, live in East Hampton, New York. 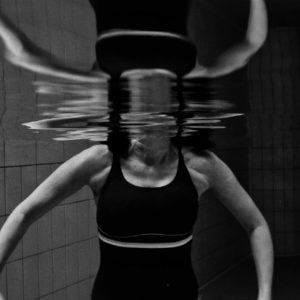 Lately I’ve been thinking a lot about memories. Not about specific recollections, but the concept of memories. What...
© LitHub
Back to top