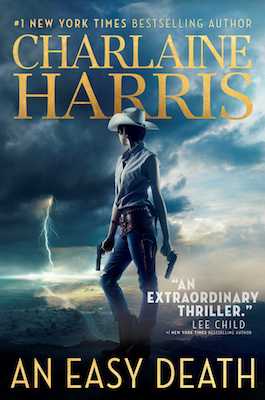 The following is an exclusive excerpt from An Easy Death, the latest from Charlaine Harris, internationally best-selling author of the Sookie Stackhouse series, as well as a number of other series and stand-alones. In the following passage, we encounter a gunslinger as she sizes up her new clients, eager to track down a missing Russian wizard in the arid country of Texoma.

The man and the woman looked the same as they had the afternoon before: tall, well nourished, well dressed, rested. Today they seemed a bit more worried.

Now that I was clean and had had a night’s sleep, and some food in my stomach, I felt I could deal with them.

I’d cleaned one of my Colts already. All the other rearms were spread out on the table, on sheets of old newspaper, along with everything I’d need: clean cotton rags, Hoppe’s, soft brushes. I was ready to work.

It was a good reminder to them.

“May we come in?” the woman asked. She didn’t sound Russian, something I’d been too tired to notice the day before. I figured her for a British import.

I jerked my head, and they stepped in. I pointed to the bench on one side of my table, and they sat. I had a stool and my back to the wall, so I could see out the door, which I left open. It was a mild morning, and I enjoyed the little breeze coming in.

I didn’t feel obliged to open the conversation. They were the ones who wanted something, not me.

I took apart Jackhammer first. My grandfather’s Winchester was utterly familiar to my hands. The feel of the cleaning rag, the brushes, the smell of the solvent, the care I was taking of the tools of my livelihood, all felt good and comfortable to me. Plus, I’d had a good look at the neglected bandit pistol. It seemed basically sound. If I put in some work, I’d get a good price for it.

I’d cleaned one of my Colts already. All the other rearms were spread out on the table, on sheets of old newspaper, along with everything I’d need: clean cotton rags, Hoppe’s, soft brushes. I was ready to work.

“I’m Paulina Coopersmith,” the woman said. Yep, she had an accent. I’d only heard one like it at the movies. “Are all these guns yours?”

“You killed them all,” the man said.

I nodded. They didn’t have anything to say about that for a goodly bit of silence.

“I’m Ilya Savarov,” the man said finally. “Please call me Eli.” No doubt about him being Russian. He had a slight accent. He might make his name more American, but I was willing to bet he’d been in the ships that had brought the tsar and his family to the West Coast after their escape in 1918 from the godless Russians. Though this Eli had probably been a small child then, since he looked in his mid-twenties now.

“Lizbeth Rose,” I said. But I realized they knew that. I almost told them not to call me anything.

Paulina and Eli and Lizbeth. We were pals now, for sure.

I finished the cleaning and reassembled and loaded Jackhammer. I set my cleaning stuff in a neat line back on a heavy pad.

“What do you want?” I said, satisfied with the job I’d done. I’d had my silence. Now it was time to get the conversation moving, so it could come to an end. So they would go.

I ran my hand down the walnut stock of Jackhammer one last time and laid it down. I made myself look directly at the grigoris. Paulina’s eyes were frosty blue and fixed on me with no very pleasant expression. Her accent was English. A lot of English magicians had migrated to California after hearing how friendly the HRE was to wizardry. They were tired of being ignored in their own country. Looked like the court had given ’em a big welcome.

“We need a guard and a guide,” Eli Savarov said. “We’re hoping you can be both.”

I looked at him directly. His eyes were green. I’d never seen that before, and it was striking. “For how long?” I said. I was going to turn them down, but not before I found out what they were doing in Segundo Mexia.

“For at least a week, maybe as long as three.”

“While you’re doing what?”

I began to clean the small parts of one of the bandit pistols, because I couldn’t just sit and look from one to another. It was necessary to concentrate on my hands, but I wasn’t so busy I didn’t catch the look they gave each other.

“We’re searching for a particular man,” Paulina said. She was picking her words one by one. “And the last trace we have of him is in this area.”

“Huh. No strangers here recently. You mean another one like you? A grigori?”

“Huh. No strangers here recently. You mean another one like you? A grigori?”

“We lost track of him some time ago,” Paulina said. “And he is a wizard, yes.” But her mouth twisted sour at giving him the title.

Eli said quietly, “He’s an embarrassment to us.”

Jackhammer was pointed at them before they could get to their feet.

They made a great show of looking astonished and scared as they threw their hands up. You had to keep grigoris’ hands in front of your eyes; you couldn’t let them weave spells with their hands or reach for their vest pockets.

“What did we say?” Paulina said. She was pretty pissed off.

But they didn’t. Even I had to admit they’d been taken by surprise. “But—but where? When?” The man, Eli, stammered as he spoke. He looked . . . dismayed. As if his world had taken a big turn for the worse.

“Five miles away in Cactus Flats,” I said, not lowering Jackhammer. “Eight months ago. He your kin?”

“No,” said Paulina Coopersmith, disgusted at the very idea. “How did he die?” Eli asked, right on her heels.

“Gunned down,” I said, glancing from one to another.

“On the head of the tsar,” Paulina said, “we did not know.” She was smart enough to see that their ignorance was real important to me.

I didn’t doubt her after that. Holy Russians, that was a serious oath to them. Alexei I was the symbol of everything they’d left behind, and their hope for the future.

Reprinted from AN EASY DEATH with permission from Saga Press, an imprint of Simon & Schuster. © 2018 Charlaine Harris. All rights reserved. 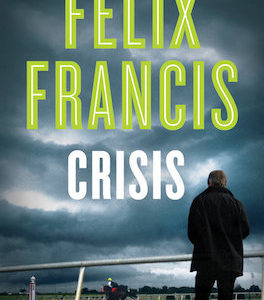 Crisis I didn’t need to receive the brief to know what I was going to. “Prince of Troy Dead in Stable Fire” read all the headline...
© LitHub
Back to top